Yes I Lurk, and Here's My Intro Blog

How I Discovered Dtoid

Some of you might know the dangers of having a job at a computer desk coupled with lots of free time. Back in 2014, I worked the evening shift at the writing center of our local community college. Sometimes, I'd have as few as one or two students per shift, and during the summer semester our nights were even slower. The last hour of my shift involved trying to find things on the internet to occupy my time.

I stopped playing video games around 2005. Back then, I was looking forward to college, so it seemed like there were too many things on my plate besides playing games. So, I took my PS1, PS2, and my small collection of games and dropped them off at the local Goodwill.

Some nine years later, with nothing but the poorly curated Yahoo news to occupy my mind between tutoring students, I would stumble across the occasional video game article. I started getting more and more nostalgic, and would find myself searching up screenshots of games like Final Fantasy VII, Syphon Filter, and Metal Gear Solid. I wanted to know what people thought about these games fifteen years or more after their release. That was when I stumbled across Destructoid.

I had probably lurked around Dtoid for more than a year before I finally made an account. Like many others who love this website, it was the community blogs that I enjoyed the most. I thought it was such an ingenious idea (and still do), the idea of a larger site hosting a section for its users to create their own blog content. Why hadn't anyone thought of this before? Personally, I had tinkered around with blogging as far back as high school, but one thing that always stopped me was the big question: how the hell would I find an audience? If nobody was reading except for me, what was the point?

Dtoid offers bloggers something: it offers them an audience, a community, and a group of admins who keep the blogging alive. If what you want is to exercise your writing skills, and have a place to share some of your thoughts and ideas with people, there is no better place to do it than here at Dtoid.

Nowadays, I get almost all my gaming news from Dtoid. But back when I was tutoring at the writing lab, I was still on a video game hiatus, so I was more interested in perusing the community section for retro reviews, which are still plentiful, or [NVGR] posts, which are not so plentiful.

I searched online to see if there were other websites that hosted a community blog section the way Dtoid did, whether or not it was gaming related. I couldn't find much, other than IGN's blog section, which was void of any admin support and filled with bloggers who were blogging into something like a dark vacuum.

Getting Back Into Games

When I was still working at the writing lab a few years ago, Nick, one of my best friends, moved back home from California. When he got here, he busted out his old PS2. He and I would hang out, drink beer, and play Champions of Norrath, Time Splitters, and Star Wars Battlefront 2, among others. That whole experience was one of the highlights of my 20s, having an old friend move back home, somebody to drink beers with and reminisce about video games, somebody who was willing to play through the VR Missions on Metal Gear Solid 2, somebody to chat with about games as varying as Final Fantasy, Diablo, Age of Empires, and Endless Space.

Another old friend, John, was working at a small retro gaming shop across town. So, on our days off, Nick and I would grab a six pack and go drive out there to hang out. It was great fun, catching up with a couple of old friends while browsing through retro games. I remember seeing the used PS1s, N64s, and SNES consoles shrink-wrapped in plastic next to a bunch of old controllers. Browsing the isles and seeing games like The Legend of Dragoon on the shelf was such a nice way to remember some of those classic games. As with many retro game stores, eventually we got the news from John that they would be closing shop in the coming weeks. Anybody who has ever run a video game store, or spends time chatting with those who have, knows that the profit margin is very low, and it's hard for business owners to keep gaming stores afloat because they often have to sell their product for not much more than what they paid for it.

So in the final few weeks of hanging out with John and Nick at the shop, John surprised the hell out of me when he passed a fat PS3 across the counter to me. He said I could have it to keep, free of charge. He'd just repaired it and added a new hard drive.

That was the start of a new era of gaming for me. I hadn't even planned to start gaming again, as I spent most of my free time reading fiction. But this was a major surprise, and such a generous gift, that I had to explore my options and learn about the PS3 games that I had missed throughout that entire generation. At this point, the PS4 had already launched, so used PS3 games were not only plentiful, but affordable. My nine year break from video games had come to an end. The first game I purchased was the PSOne Classic version of Final Fantasy VII, which I played until completion for my third time. Next up was Metal Gear Solid 4: Guns of the Patriots.

Video games are not an entirely solitary act. They have also allowed me to reconnect with some of my oldest friends. George, Dan, and Hans are three guys I’ve known since elementary school, and these days we meet up online for some serious game time. They formed a group called The Pumpers with a few other players: Shawn, Marel, Josh, and RockWar. I love playing online with these guys. It’s always a fun time, and sometimes a rowdy one. They favor Overwatch, which I've only recently begun to play, but we also play Siege and Battlefield, among others.

Fifteen years ago, I never would have imagined using my game console to play online while chatting with friends, but I’m glad I got back into playing games, because I’ve had a lot of good times on PS3 and PS4 with these guys over the past few years. Throughout my entire hiatus from games, these guys were gaming hardcore. Now that I’m back into it full force, George, Dan, and the others have been instrumental in catching me up on all the games that I missed out on, and I owe them big time for that. I was totally absent from games when Demon's Souls released. Now, it's one of my mega-favorites!

Where To Go From Here?

Over the last few years I have explored many video games, and because of this, I feel that I have a lot to write about here at Dtoid.

I hope to blog here more freqeuntly, and I hope that in blogging I can also encourage others to write, not just about video games, but also [NVGR] posts, i.e. movies, books, and comics. (Come on Admira! gimme those Star Wars blogs that I'm craving!). Maybe this, among other things, could help attract new bloggers who might assume that only video game related blogs are welcome here.

Eventually, I'd like to start a blog of my own, outside of Dtoid (with links of course!) where I can expand my writing further. But all in all, I want to help keep this communtiy going, as it has provided me with so much information over the last few years, but more importantly, it has connected me with a community that doesn't seem to exist elsewhere in the dark, strangled void that is the internet. If I can help add a little bit of content to Dtoid, then maybe I (or rather we) can encourage others to do the same.

If you've read all the way to this point, then I'm honestly surprised, because this post was a little long-winded. In any case, thanks for taking some time to read my intro blog. I hope to churn out more blog posts in the near future, and I look forward to getting back in touch with the community, as my presence here has been on and off throughout the past few years. So, thanks for reading.

Oh yeah, I almost  forgot. What's a Sharukurusu? You'll have to play Mega Man Legends to find out! 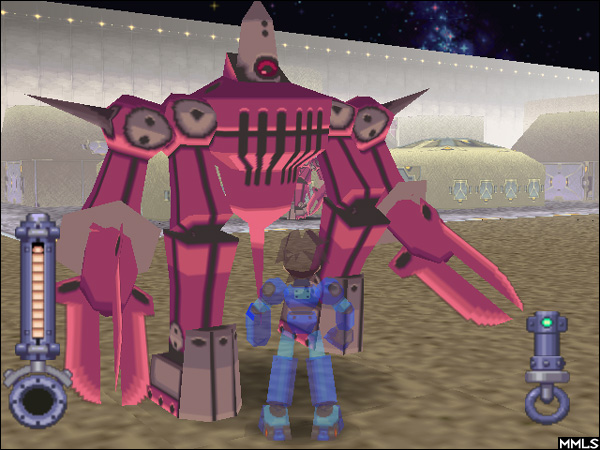