Traveller In Playtime – Shadows of the Damned

Shadows of the Damned is a horror-themed third-person shooter brought to life by Grasshopper Manufacture and published by EA in 2011 for PS3 and Xbox 360. It's a tale as old as gaming itself, where a man, armed only with his talking gun, goes to hell to save his girlfriend and shoot a demon lord in the face. Hilarity ensues. 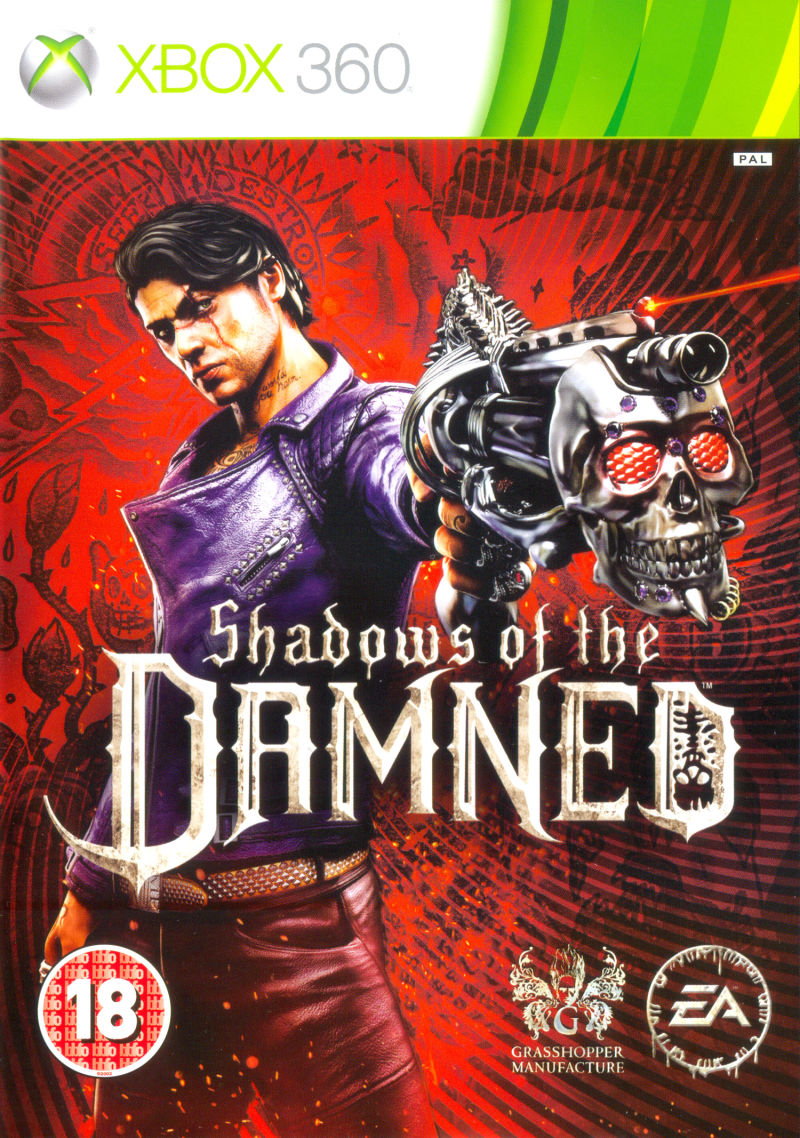 G, His Girl And His Johnson

The story of SotD is a delight. First, there's our main man G. Or Garcia F(ucking) Hotspur, as he is sometimes called. He's a macho mexican man that can cuss like the worst of 'em and has a heart as big as his gun. Said gun being the ex-demon Johnson who completes this dynamite duo. Together, they joke their way through hell, making for a really nice dynamic.

The whole game rides on their banter, with little else of worth present, save for the backstories of the bosses. These backstories are told to you via story books found before you fight them. Story books read to you by Garcia and Johnson, to amazing effect.

Garcia's girlfriend Paula is a pretty weird lady. She's a damsel in distress, no doubt about that. But seeing as she's kinda crazy and gets killed over and over again as you make your way through the underworld, I can't help but think that's she's intended as a subversion of sorts.

It doesn't mean much in the grand scheme of things though, you're here for the ride to hell, not the destination. The demon lord Fleming is given very little screentime, so the final confrontation and subsequent rescue feels a bit limp.

The Drunken Nephew Of Resident Evil 4

Ever heard of Resident Evil 4? It's a pretty good game, yeah? So good in fact, I have yet to stop talking about it in different reviews! But before we get ahead of ourselves, let's examine what fingers had their way in this cherry pie.

It's partially written by Suda51, has a score by Akira Yamaoka and was produced by Shinji Mikami!

Such a combination waters the mouth, but the game isn't as good as the everlasting masterpiece one would hope for. Yamaoka's music is rather understated (but still good), it's not as inventive as I know Suda51's writing can be and the gameplay nicked from RE4 is a bit unfocused. Still, the end product is respectable and doesn't seem to have fallen victim to multiple creative forces going in different directions. Now, for the gameplay.

It's RE4 under a different coat of paint with some extra mechanics bolted on top. Garcia is rather mobile, allowing for endless dodge rolling should you want it. Hell, he can even do the backside counter QTE thingie from God Hand!

To counteract your mobility, enemies are much faster than those in RE4, but about as aggressive. That means that they'll keep pressuring you, but not murderize you outright, which is welcome. This makes them a bit hard to hit though, but the game is balanced to let you get by with the accuracy of a drunken possum going by the availability of ammunition. And what do you use that ammo for? Johnson, of course!

He can transform into three distinct guns (pistol, shotgun, machine gun), all of which have an alt fire of sorts. This means that you always have your tools at hand. The gun kinaesthetics aren't the best, but are good enough. I can't say the same for the torch attack though, which is incredibly easy to forget about. The RE4-esque QTE attacks on stunned enemies remains good throughout at least.

The one mechanic the game can call its own is the darkness. No, not that one. As you explore the underworld, you'll come across patches of darkness that drain your health and make enemies invincible. You'll either have to disperse it, or run through it to progress.

At your disposal, you have the light shot, which can be used to make goats brighter, earning you some sanctuary. Obviously. It can also be used in battle, either to make bosses vulnerable or to stun normal enemies. And since you have an infinite supply of light shots and can heal at the swig of a bottle, dying isn't really a viable concern. Something tells me this is a game best played drunk.

Many games are linear, but I haven't played a game as restrictive as this one before. The game locks you down something fierce, guiding you exactly where you need to go. There are some shinies to be found off the beaten path, but those are rare. And it's often a dice throw whether you'll pick up the collectible before getting locked into progress. And funnily enough, the few times the game opened up, I got lost very quickly.

The game has a bit of a cheap feeling to it from time to time (especially if minibosses get stuck on walls), but with the relatively fast pace, you're never staying somewhere for long. And the dialogue keeps things fresh.

Don't Pull Your Pants Down Before You're Ready

The art on display isn't masterful, but it has a unique style to it. You'd expect lots of Day of the Dead decorations, but it's a tad more muted than that, without being boring. Think more ”rundown carnival”.

Sadly (on PS3 at least), the game suffers from some truly outrageous streamed loading issues when loading from a checkpoint. I'm glad for the shorter load times that hopefully brings, but it takes an eternity to load the proper textures. Even the loading screen drops frames! Yet wierdly enough, the framerate never really goes bad. Maybe they made the right decision here, I can't tell.

Grooming Johnson To Your Liking

The upgrade system is about as simple as you can get away with. As you progress, Johnson will get blinged out with blue gems, which earns you unique upgrades to your guns. Most of the time, these upgrades grant you new abilites to round out your versatility.

You can also feed him red gems to upgrade whatever aspects you desire. But since every upgrade costs one gem, I fail to see why anyone would spend them on the torch attack and light shot over the guns and more health. Not all upgrades are created equally and this game really needs upgrades with differing costs in accordance with their power.

There are a few minigames on offer and somehow, they all tie into the main gameplay ever so slightly, which is pretty cool. Usually, one mechanic gets lifted and put into a new context, making for some fun distractions. But some of the minigames last too long for my liking. They're not frustrating, but I can only engage in a simplistic schmup for so long before I wanna get back to stomping demons.

Wait a minute...THE GUN IS HIS PENIS!