Traveller In Playtime - Nayuta no Kiseki

Nayuta no Kiseki is an action RPG with platforming elements made by Falcom for the PSP in 2012. The story revolves around the adventures of Nayuta and his friends after a portal to another world opens. 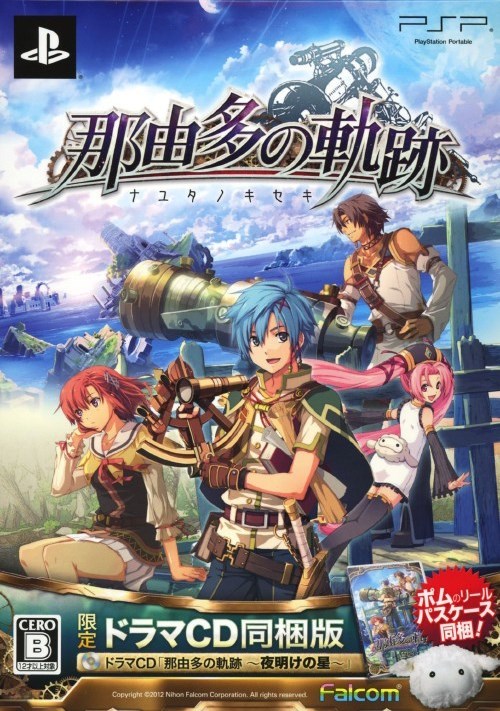 At this point, I've gone through a fair share of Falcom games and it isn't hard to see a pattern between their plots. Nayuta no Kiseki goes through familiar tropes of ancient races, ruins and a gigantic demon/god thing you fight at the end.

It's a familiar blend, but I think the game manages to set its own tone. It's themed around stars and astronomy and Nayuta has his home on a lovely tropical island. It makes for some nice contrast to go from the tropics to the enchanted enviroments of Terra.

The story is your standard JRPG fare, genocidal villain versus idealistic hero and all. But the characters really bring it together. The story starts properly when a ruin falls from the sky for Nayuta and his pal Cygna to explore.

Inside, they find a fairy named Noi chased by the villain and his right hand man. They steal a magical gear from her and sod off, leaving the boys with Noi. She soon runs off as well and they follow her into Terra where Cygna vanishes.

This causes Nayuta to team up with Noi and the game begins proper. They set out to find all the stolen gears while looking for Cygna. A major part of the game is pretty light on plot, but it soons ramps up to a satisfying conclusion that may or may not involve a giant god/demon fight.

The only weak element is Nayuta's childhood friend who doesn't have much character beyond her obvious crush. It wouldn't be so bad if the game actually went somewhere with their relationship. There is very much room for at least one scene where they have a proper relationship-building talk. Thankfully, Nayuta's friendships with Noi and Cygna manages to pull their weight, so the story gets a pass on that front. The NPCs offer some decent amount of charm as well.

The game has a very solid structure to it. Terra consists of of four main continents each split into a few levels. Most of these levels can then be modified by changing the current season, resulting in a great total set of levels. It's a clever way to work around the PSP's limitations and the game manages to make these changes substantial enough to not feel repetetive.

Paths are changed, hazards are swapped around, secrets appear in different locations and enemies are usually not just palette swaps. It took me a while to recognize a few levels because of this.You also have to use this ability to solve a few clever quests. Actually traversing the levels starts pretty simple, but goes to some crazy places come endgame. The game's platforming mechanics aren't that complex, but the controls are solid.

Beyond the standard double jump, Nayuta gets a gear-related power after every boss. These have uses both in combat and in traversal puzzles (some more directly than others), which is something I always approve of. The Swingshot-esque power is a bit awkward to learn, since you need to hold jump to swing, but otherwise they're pretty great. My favorite has to be the Gear Drive that lets you bulldoze your way up walls at high speeds.

There are always three things to do in order to earn a perfect rank in a level. You need to beat it, find all treasures and complete the level challenge. Kindly enough, not in the same go. Most of the levels can be completed the first time, but there is of course some backtracking to do. Levels are so short though, so replaying them to find the thing you missed isn't a bother.

In spite of its appearance and title, I think it's fair to claim that Nayuta no Kiseki is the unofficial third Zwei game. Not only do you use food to partially level up, but you can also make use of a spellcasting partner with the press of a button. The person in question being Noi the fairy, of course.

Nayuta has access to a series of small and large swords that have small differences between them. There's also a decent selection of armor for him and Noi that grants you a bit of choice, not unlike Zwei 2. Clearing levels with good ranks grants you access to a nice selection of extra moves. I can't say I used the extra ones that much, since the basic combos work so well, but it's nice that they're there.

Noi works in a similar fashion to Alwen in Zwei 2, except that she has a more diverse set of spells and that you can use her independently of Nayuta. I'm quite satisfied with the progression system in place for the spells.

You start with a meager spell slot and one spell. As the game goes on, you upgrade your spells with usage, get more slots and get more spells, of course. The nice thing is that the spells recharge with time or Nayuta's attacks and that you can cast them whenever you want and still get exp.

This means that it's very possible to enjoy the benefits of a fully upgraded spell for a little while before you find a stronger one of similar nature. They're all a bit unique, so you have to change up your strategies a bit throughout the course of the game, which keeps the combat from becoming monotous.

The gear-based moves have their own bar that only recharges with time and stuns Noi if you let it run out. The game expects you to be perceptive and not use the attacks when you need the powers for platforming. It's not a major concern, but I did send Nayuta to his doom a few times because of this.

Normal enemies aren't much to talk about, but the bosses are really good. They play with their fixed perspectives in interesting ways, push the PSP to its limit and make good use of the gear powers. Their phase changes in particular are excellent.