Shadow of the Jank - a review

So, I'm just off finishing the Shadow of the Colossus HD, yes the one for PS3. While other folks are bathing in clear waters of 60fps fluidness, covering themselves with a snow white foam of 4K visual goodness, I'm still stuck in the past. But that's not necessarily a bad thing you know? This version is as close to the original as one could get over HDMI nowadays without resorting to modding a PS2, so it is only fitting to review the game in face of a full blown re-make being released. 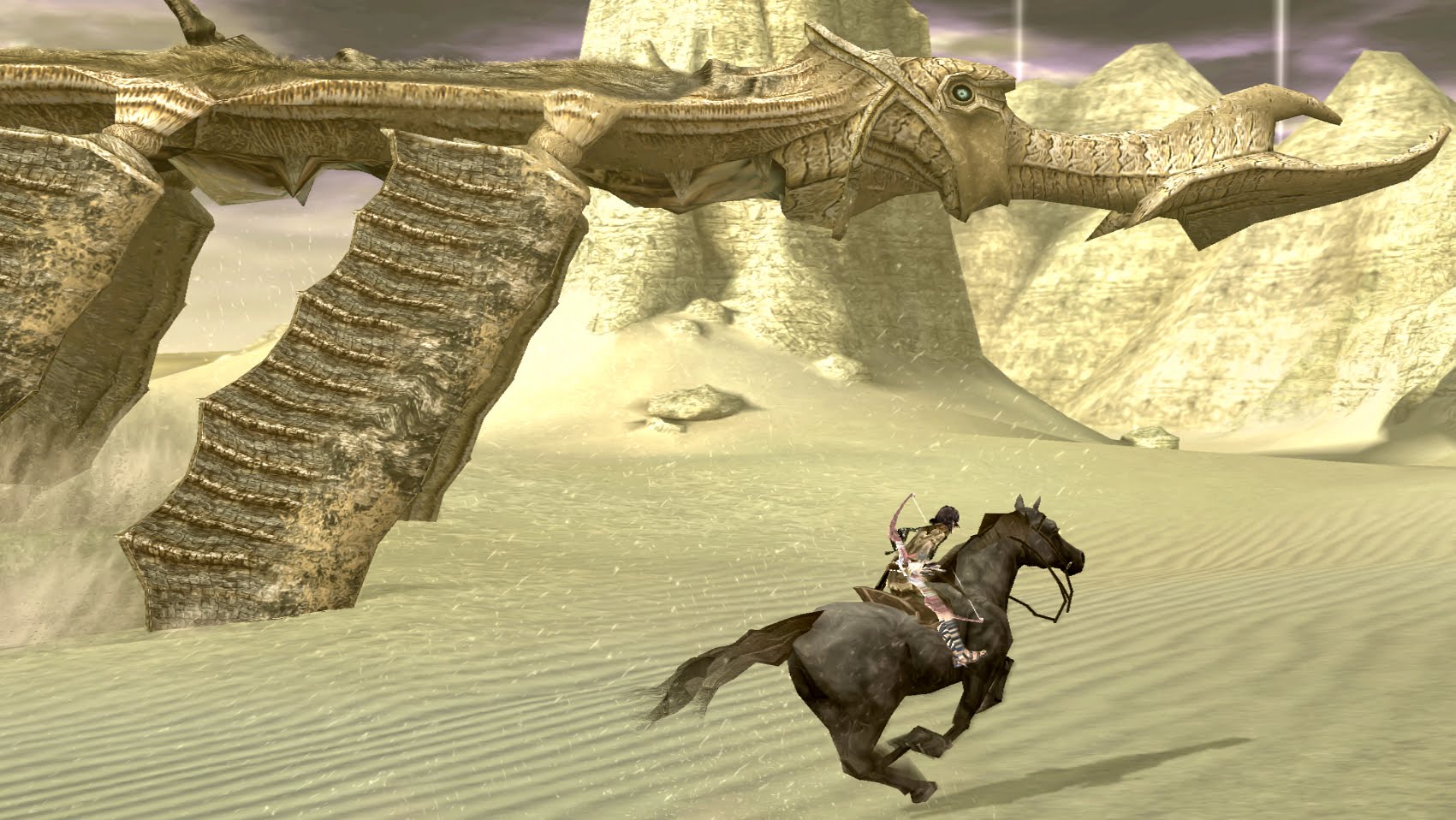 I realize this game is very highly regarded and for the most part deservedly so, there are a few things however that can put a damper on ones enjoyment. See this game makes no compromises - it kinda wants you to love it for what it is or just fuck off and go play some Call of Duty. Take the controls for example. The thing is in general the game feels purposefully janky. Your protagonist runs as if his knees were about to break, your horse doesn't listen half of the time and seems to have a mind of its own, jumping is awkward - the list goes on. Don't get me wrong its not like it's unplayable, it is very much enjoyable if only you allow it to be what it wants to be. Remember Resident Evil 4? Fantastic game right? Changed the games to come, changed the franchise, showed a new direction for the genre etc. Try and play it today though and you'll realize how uncompromising of a game it is. The aiming feels unnecessarily clumsy, even walking in the desired direction is a challenge at times. And I heaven't even mentioned the original RE's, so its not even a case of classic tank controls we're talking here. My point is: not every game has to control the same. The only requirement in my mind concerning controls is it has to make sense. And in case of Shadow of the Colossus, just as RE4, it very much does, for the most part anyways. The challenge of the game comes partly from what you're about to do (which is killing Colossi) and partly from the mechanical execution of it. The game doesn't want to help you in what you're doing. It's like being a puppeteer - no one's gonna make a puppet that controls easier just because you cannot wrap your head around all the wires. It's a thing you have to master. And it's fine you know. Some games want you to get good at pointing and clicking on heads (this would be the Battlefields and Call of Duties) , some want you to get good at predicting your opponents moves and reacting appropriately (Street Fighters and so on) and some just want you to get good at controlling an unwieldy puppet and do doubtfully heroic things with it. In the case of Shadow of the Colossus this clumsiness is cushioned by limiting your move set to a minimum. You can run, jump, climb, shoot the bow and wield a sword. That's basically it. It's mechanics are simplified and instead of teaching  you executing complex combos the game teaches you to do simple things like jumping. The learning process being actually getting to grips with how the controls work, what is and what isn't achievable within this simple framework. I'd go as far as to say the janky way your protagonist moves is the defining factor of this game which is only made clear by the fact the fancy new re-make has kept the controls untouched for the most part even though the game has been basically re-written form scratch. Now that's not to say it is perfect and everybody will like it. In fact, the way the bow is aiming (while you initially draw it) always in the direction the Wanderer is looking instead of where the camera is pointed drove me nuts! So I can easily see how someone would be put off by it, but I'll say this: try and stick with it, this game is well worth it. 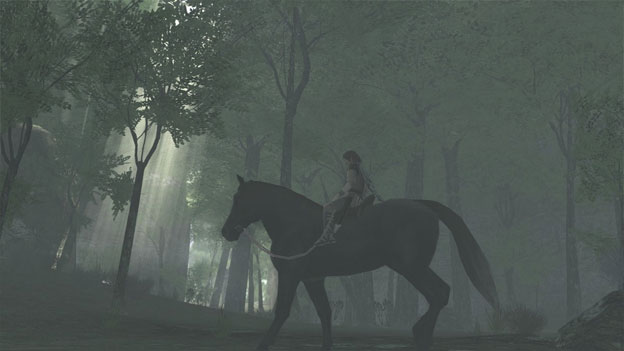 On the topic of jank - early open world games, especially Japanese ones were not particularly polished, so don't be surprised when you see lizards clipping into the abyss, your horse trying to mount a vertical wall or straight up falling from the sky while you whistle to call him; or not being able to ride over the smallest of obstacles while afterwards not having a problem with going over a big rock. Everything seems like an imitation at times, a stand-in decoration so just as in real life theater one has to be careful not to knock shit over. Jokes aside, for real, it's one of those instances where the jank just works. It's reliable jank if you like. After a while you'll have a good grasp of what is possible and what is not. Take the horse for example. I heard people calling it the best horse representation in video games ever and I'd agree with that although sometimes his free will is a tad bit much for my taste. It's fine with me that he doesn't react immediately, it's okay he sometimes doesn't accelerate at all when you want him to, but at times he'll react to your inputs after 5(!) seconds... And it could've been fine had he been giving clues as to what is going on, I don't know, shake his head, nicker or whatever horses do to communicate, but NO! he'll just act like a dick and you have to suck it up. BTW does anyone know how to stop him? I sure don't, I always just jump off off him.
Having said that I still enjoy Agro for his horsiness - he at times truly feels like an animal, like a living being that cannot clearly communicate what he needs. After a while I developed a relationship with him and this doesn't happen to me that often.
Jank aside, the real stars of the show are the Colossi obviously, so let's talk about that. There are 16 of them and almost all of them are a masterclass in enemy design. The scale makes the biggest impression at first, but take your time to absorb all the detail, cause the Colossi are as detailed as the world is barren. I was particularly impressed with the fur tech at display here considering it's a 13 years old game at this point, but the geometry doesn't disappoint too. You can clearly see where the graphical power of the PS2 has been put to good work - while the world isn't particularly detailed and the textures are blurry coming across a Colossi still makes ones jaw drop. Inspired design and technical proficiency is the name of the game although it came at a high price at the time of the OG release - on original hrdware the framerate tanked into the teens. 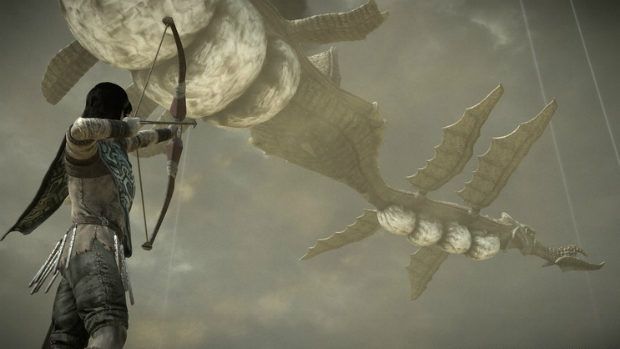 Gameplay wise one could say the exploration is filler, an oversight, as the gist is in fighting those beasts. It's here the game is in full swing and at times it's truly awe inspiring - mounting a multiple stories high beast and clinging to it for your life, accompanied by a truly inspired musical score is thrilling and in and of itself a reward, while conquering it is satisfying and heart breaking at the same time. And that's probably a fitting feeling considering how the story unfolds. The clinging mechanic is still exceptional and the way Wanderer gets thrown around while the Colossus tries to shake him off seems dynamic and natural. Slaying the beasts isn't particularly challenging - I managed to finish most of them on first attempt, but the fights are partly puzzles - you have to find the Colossus's weak spot, find your way up there and do the stabbing. Health auto-regenerates so its not often that you'll see a game over screen, but couple that with what I said before and it makes for a grand, cinematic experience, which in the case of Shadow of the Colossus, makes good sense. Speaking of cinematic experiences the camera tries its very best to show the action in a spectacular fashion, but it manages to only do so much - sometimes it gets in the way of actually playing the game. I'd say not to an annoying degree, but it's something to keep in mind - it isn't perfect.
The game is very cryptic and minimalistic with its story telling. For the most part you'll have no clue as to what is going on. There are hints, those are so subtle however that in most cases it'll just fly over your head. Suffice to say folks that played Ico will find some references here and there as the game can loosely be called a pre-quel. Without spoiling anything it is an unexpected story with no happy ending in sight and I very much enjoyed the subdued approach especially that the emptiness of the world kinda plays into it. It's definitely a case of the less is said the better.
Does Shadow of the Colossus live up to the praise it gets from its fanbase? The short answer is: it sure does. While it has its flaws and time period specific quirks it still is a fantastic adventure worth replaying to this day. It's one of the first artsy games and there aren't really many others that occupy the same space even now, but its influence can be seen in games as varied as Breath of the Wild or The Journey. There are videos going deep into its story telling, as there are videos going equally deep into its gameplay and at this point the game has been dissected and researched in all possible manners, including thorough data mining, so if you're interested by all means go on the internets and find out what the hype is all about. But I have a better recommendation for you - why don't you go play the fucking game instead? It's brilliant, it's special, it's one of a kind and it absolutely deserves to be experienced, if only for the fact of its significance.
On the subject of the PS2 original - in my opinion it is not worth playing nowadays as the PS3 HD re-master sticks to the original - same geometry, same gameplay, same textures - while offering stable framerate (30fps) and HD res. The PS2 release often drops to 20fps and even into teens during boss fights and for that reason I wouldn't consider it as a viable option having PS3 HD and PS4 re-make on the market (although there are crazy people claiming that it felt more spectacular when PS2 choked to death on it). So, unless you're a purist or a masochist who likes his eyes bleeding the PS3 or PS4 versions are the way to go.
Login to vote this up!