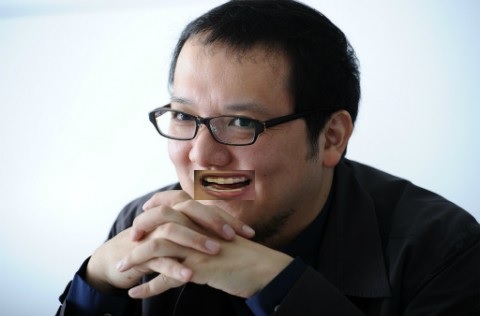 [Hidetaka Miyazaki [HM] enters the room, flanked by his translator [T]. CaptainBus [CB] conducts the interview, and doesn't tell Hidetaka that he can fluently translate Japanese.]

CB: Miyazaki-San, welcome to this Invented Interview. Firstly, I know that you are notorious for not liking to participate in interviews, so thank you for taking the time to join me today. As you can see, I have covered the Interview Room in pictures of webbed feet seen from underneath a duck. I'm sure you're wondering why I did that? Well, ducks have webbed feet, and the bottom of a foot is known as a sole, so what are they? Duck Soles! Duck Soles sounds a bit like Dark Souls! It's just a bit of fun, but I hope you appreciate it.

HM: Quit wasting my absurdly precious time, you creepy mistake of nature. Let's get this over with; I've got some really freaky intercourse that I am going to go have back at my insanely expensive hotel room, with leather and whips and whipped cream and creamy leather. And leather whips. And, like, five women. And an ostrich. Or an emu. It depends on what my agent can secure at short notice. Have you ever nailed a flightless bird? Like, really grabbed the back of one, and gone to town on it, with your aroused gentials right up inside its bird bits? It's quite the experience. Who am I kidding? It doesn't look like you get much luck, even with your own species.

HM: I don't remember anyone bitching and moaning when Ghouls and Ghosts or Megaman came out. I don't hear literary fans moaning that Dostoyevsky in the original Russian isn't accessible enough for fans of Curious George. To directly answer your question; you are a big crybaby. If you want to play something easy, go back to Club Penguin. If that’s too tricky for you, here’s a game even you shouldn’t struggle with: Try to find someone who is disappointed in you.

T: Miyazaki-San says that you make an astute point, but feels that giving options that compromise the difficulty would irrevocably harm the game, and by very nature it would lose its identity as a title designed to be a challenge - one that, when overcome, delivers a degree of satisfaction that other games struggle to provide. It was this identity that helped build its cult following in the first place.

HM: Speaking of struggling to deliver satisfaction, tell your wife I said hi.

T: On a separate note, Miyazaki-San offers regards to your wife.

CB: Gee thanks, though I didn't know that you two had met. How exciting!

CB: Now, if I may, I wish to delve into Hidetaka Miyazaki the person. Why are you so averse to being interviewed?

HM: I have to consort with mouth-breathers like you.

T: Miyazaki-San thinks that this is an interesting question, and is flattered and appreciative that you would consider him worthy of media attention. However, Miyazaki-San is a firm believer of letting the games be the stars of the show, and the products to be the focus of discussion. He feels that he has got where he is by surrounding himself with very talented artists and coders, and for him to be the centre and focus is to divert credit from the enormous and dedicated group that are involved in every FromSoftware title. 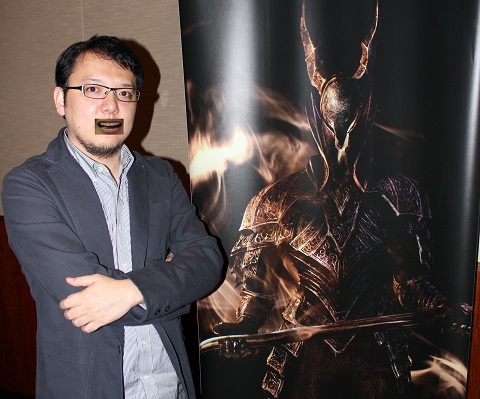 HM: Strong words from a man who's created nothing of worth in his life. Listen up, nutsack: I wanted to give the impression of a broken world, filled with ancient mythology, drawing deep from Western European roots. As I'm sure you know, since it clearly looks like you came from a broken home, there are lots of stories behind these environments but also a lot of things kept secret - like why the postman keeps coming round to see your Mum, even when he's not got any post. Perhaps he's delivering something else? Perhaps it's a thick package? Full of semen? Come back to judge me when you've sold over 2 million copies of a game, or appeared on a Top 100 Best Games Ever list. Until then, stick to something you're good at - staring into a mirror, realising your life is a waste.

T: Miyazaki-San understands your concerns but challenges your assumptions, feeling that the disjointed narrative was a natural design choice, allowing the player to fill in the blanks using the power of their imaginations to illustrate the mysterious and ever-dimming world.

CB: Domo arigato Mister Miyazako. Now, I want to ask you a question about the future of the Souls series: Now that we've had a third “Dark Souls” game and we've had only one “Demon’s Souls” game…

HM: ...Oh, I know where this little shite is going… [pulls out an Estus flask, quaffs from it, forward rolls out of the interview room]

T: Unfortunately, Miyazaki-San is due to attend another interview at this time. 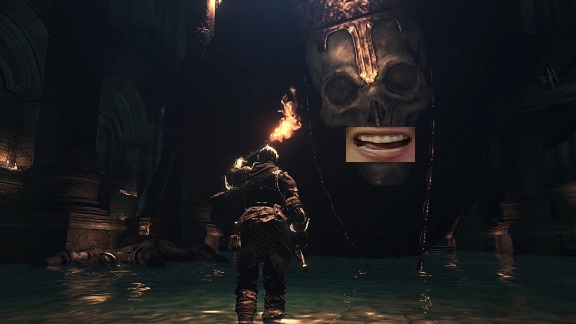 Disclaimer: This article is entirely fictitious and the product of an unusual mind. The views, opinions, sexual preferences and gymnastic abilities of the people and games referred to in the article do not necessarily reflect those of CaptainBus, his mysterious alter-ego, Hidetaka Miyazaki, FromSoftware, Destructoid, or any of their associated parties, friends, relatives, enemies or lawyers. The "Souls" series of adventure RPGs are more than worthy of their commercial and critical success and from what I have read, Hidetaka Miyazaki is a likeable and modest individual who has earned his status as videogame auteur of considerable repute from humble beginnings. Do not consume kitchen products unless otherwise advised to do so by a qualified healthcare professional. Always read the label and consider alternative liquids as a source of beverage refreshment.