4:28 PM on 09.15.2013 (server time)    0
Horror fans have had a great couple months.  In film, The Conjuring has been a bigger box office success than any traditional horror movie in nearly a decade, and You're Next has been dragged from production purgatory to heaps of critical praise.  We've had two viable entrants into the "Scariest Game Ever" debate with the asylum-bound Outlast and the reality-unbound Amnesia: A Machine For Pigs.  And while the recent de-fanging of the FEAR and Dead Space franchises was all but a death knell for AAA horror, and well-marketed sequels still outperform smarter flicks at the box office, there's plenty of reason for a horror buff to be happy.

If there's one thing we've learned from the "Adventure games" revival spurred on by David Cage and the indie scene, it's that games and movies are separate beasts and need to do different things to succeed.  If there's an exception, it's probably horror.  Whether on a silver screen or a backlit one, horror is designed, first and foremost, to scare the viewer.  Good horror scares us, and bad horror doesn't.  The methods, imagery, and tropes games use to send chills down our spines pull from the same pool of influences as cinematic horror--namely, books and other movies.  Silent Hill wouldn't exist without Jacob's Ladder, Dead Space owes a debt to Event Horizon and The Thing, Outlast pulls from Session 9 and Rec, and parts of Amnesia would fit right in with Lovecraft's works.  It's fantastic source material, something that's been proven time and again, and it's led to a genre that has scared us for years and keeps finding new ways to do so.  But an important and ever-growing slice of the horror movie pie remains conspicuously absent.

A lot of us probably still think of horror as it was in its heyday in the mid-70's through early 90's.  These were the days of John Carpenter's early works, when slasher flicks and trippy brain-benders reigned supreme and every movie was about some kind of supernatural, nigh-invulnerable baddie gruesomely killing off a group, person by person.  After a decade-long doldrum, legitimate horror re-emerged in the early 2000s with a different flavor, one heavily influenced by the blockbuster success of The Blair Witch Project.  Old horror's focus on "things that go bump in the night" was replaced by more realistic threats that turned out to be far scarier.  Poltergeist and Amityville's ghosts loved to throw chairs and make faces in curtains, but The Others and later Sinister and The Conjuring showed that the mere suggestion of paranormal activity could be far more effective.  Rec and 28 Days Later were zombie flicks that focused on the human drama--the zombies were part of the story, but far from all of it.  Wolf Creek and Inside both proved that real human insanity is far more affecting than Freddy or Jason's apathetic sadism. 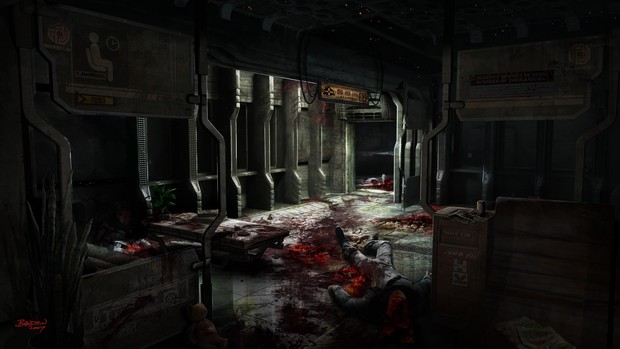 There's nothing wrong with big, gory horror, because it obviously works.  Dead Space and Amnesia are objectively terrifying, and the setting and enemies deserve a share of the credit.  But shocks like these only continue to work when they escalate.  And when you're starting things off at the level of Barker or Lovecraft, there's not much room to make things worse.  The feeling of being trapped or hunted, or the sensation that I'm running out of time…that never gets old.  And it doesn't matter if the reason I'm under duress is a monster with three heads and twelve tentacles or a fat guy who thinks I killed his daughter.  The horror is there either way.  Beyond the first few times, all this gruesomeness and reality-bending is just window dressing.

We've seen a couple examples of more realistic horror, but they're rare and tend to fall outside the horror genre.  Manhunt would've been an excellent dose of purified hunter-hunted tension were it not for immersion-breaking AI, and The Last of Us showed us that humans with nothing to live for can scare us more than monsters when they're portrayed well.  Even the Bioshock series has, at times, served as a tremendous demonstration of how utterly horrific other people can be if their motivations push them to do the wrong thing.  And when you ask people about horror games, it's the more human parts that stick with them, like Bioshock's iconic pistol reveal or Dead Space's suicidal engineer banging his head against a wall.  Seeing ourselves in an environment with realistic people that we can believe affects us in ways that a complete fantasy can't.


Artists will always find ways to make things bigger, badder, and bloodier, and crafty scripters will always find new ways to get the jump on us.  But this will never truly resonate with us in the same way as seeing people fight for their lives against something we could believe really exists. Horror is fine the way it is; there's no need for a revolution.  But the next time horror developers are  sketching out the influences on their games, it'd be great to see this list reflect what modern horror has become.
Login to vote this up!