The Year In Wii U: All About The Games Edition (Part 1)

10:44 AM on 01.02.2014 (server time)    0
Hello again! My recent case of Nintendonitis continues unabated, so it's only fitting I end, er, start the year with another Nintendocentric blog. However, this time, there's a twist. Can you guess what it is? I'll give you some time to think (hint: title)... no? nothing? That's what I figured. It's such a big paradigm shift, it's hard to wrap one's head around it.

This time, we won't talk about sales, industry, business strategy, projections, console wars, etc, etc, etc. We'll just talk about... GAMES! Shocking, I know. When was the last time you did just that? My guess would be "before the internet was invented".

Of course, the Wii U haz no gaemz, so I can forgive you if that makes you even more skeptic. However, I used my awesome magical powers to perform the miracle of games multiplication, and the results were not too shabby, especially for a system with NO GAEMZ! So here's how this blog is going to play out: I'll simply list the games I played and talk a little about my experience. Revolutionary, I know. I'll also throw in some official-looking data from the Wii U log, such as total time played and the number of "retries" (which is how Nintendo calls the number of times we played the game) to give off that "totally scientific and objective" vibe those 8.456 review scores try to present (even if the reviewer cries OPINION to hide from every criticism!). 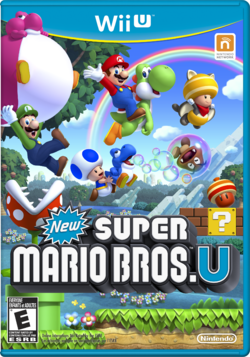 Some people are starting to (understandably) claim Mario fatigue (or more specifically, 2D Mario fatigue), but curiously, I can say I'm just now really discovering the joys of the classic plataformer. Back in the day, I liked Mario, but I wasn't such a big fan. I never had a NES, and my first and for a long time only Mario was the SNES' Super Mario World. When I had a N64 and getting a new game as 14-year old Brazilian teenager was a momentous occasion, I chose Banjo Kazooie and Diddy Kong Racing over Mario 64 and Mario Kart 64. The situation with the Gamecube was even worse due to changing economic factors that caused the price of games to skyrocket, and Super Mario Sunshine didn't make the cut.

These days, on the other hand, I'm all over the red plumber, and NSMU is my favorite of the 2D bunch, and downright gorgeous at times. Unfortunately, it was a victim of circumstances. It's was a terrible choice for a launch title when so many potential Wii U owners were still playing other 2D Marios elsewhere (NSMB 2 and NSMB Wii are still hanging around in several Amazon charts), and then the Wii U had all the problems already discussed ad nauseam. Now that it's a pack in title, it's at last getting into many more hands (that hopefully won't be blinded by "pack-in stigma") who will be able to enjoy this colorful, joyous, pretty, imaginative and just plain fun game.

I don't play shooter very often, but when I do I always go with with PC master race! Nothing beats mouse and keyboard in FPS, but I was curious to see how the Wii U handled a fast-paced multiplayer shooter, so I decided to check out Black Ops 2, and I'm glad to report I liked what I saw.

Aside from the controls, obviously, I didn't notice any marked differences from the last CoD I played on PC (Modern Warfare 3, if memory serves), besides from the expected graphical differences (which are rather mild, which says a lot about the effort put in the PC port), and I can't imagine things are much better elsewhere. I hear benchmark testing pegs the Wii U as having the most inconsistent frame rate, but I didn't notice anything that got in the way of the action (or anything at all, in fact), and if you need to be told there's something wrong with a game then look for it to find it, dude, you need to get your gamer priorities straight! The larger map and quick access to killstreaks on the Gamepad comes in handy sometimes, but it's not a big deal. Most of the time you will be looking straight at the big screen.

I also didn't have a problem with the low player base, though it's definitely an issue for those who like the more exotic modes. I mostly played Team Deathmatch and occasionally domination, so I was covered and the online structure was as good as what I'd expect from elsewhere. The Wii U tells me I played 76 hours in total, so something tells me I had fun!

Would I choose Wii U over PC for my next shooter (assuming the Wii U does get another shooter)? I'm actually not sure. I'd expected the answer to be a clear no, but the Wii U version has something that the PC lacks that's a big deal for me, or to be more accurate, the Wii U lacks something the PC has in abundance: cheaters. I heard somewhere that the Wii U was the only unhacked version of CoD. I have no idea if that's true (and even if it is, I assume it only refers to current gen consoles. Surely the PS4 and Xbone haven't been hacked already?), but it's definitely true that cheaters sometimes, or often, ruin the fun on PC. On the Wii U, you know that every match is going to be fair, and that makes a big difference. Will that be enough to sway me despite the advantages of the PC, namely mouse/keyboard and price? We'll see. I've talked at length about my love for ZombiU here, so I'll just direct you there, but not before screaming in your face that you should GO PLAY THIS GAME RIGHT NOW!!!!

This game is amazing, I can't believe I waited so long to play a classic Metroid. I'm so glad Nintendo included it in that 30 cents sale, otherwise I would have flown right under my radar. Up until now, the only Metroid games I've played are the Prime trilogy (as good as everyone says) and Other M (as far as I'm concerned, much better than most say. I wonder if playing it without the expectations of what a 2D (ish) Metroid was supposed to look like made me enjoy it a lot more).

I made it to the end, but boy let me tell you, if you beat this game back in the nineties, aka "before the internet", you're a freaking superhero! I tried to figure things out on my own as much as possible, but I'll freely admit I never would have made it to the end credits without a guide to show me the way from time to time.

As for the gameplay, well, there's not much I can say that everyone hasn't heard over and over again, even those who've never played it. What I can say is that if you, like me, never bothered with this game, you should go fix that right now!

After I was done, I tried the original Metroid, but quickly gave up. Visuals so primitive it's sometimes hard to even tell what's going on, a standard beam of limited length and only 4-way shooting quickly overstayed their welcome, so I'd recommend you stick with the Super version.

In any case, I'm now more pumped than ever for a new Metroid, and I'll definitely try to take a look at the portable Metroids I missed. Hopefully Nintendo will some day remember to put DS and GBA Advance games on the Eshop and make it easier. When I started this blog, I somewhat naively planned to write everything in a single blog, but Microsoft Word tells me I'm at 1312 words, and I still have several non-existent gaemz to go, so I'll instead make it a series, and talk about the remaining games in digestible, roughly 1000 words installments. BTW, I just realized I just published my first series! I'm going places!

I hope you enjoyed reading, and I'd love to see some of your own thoughts on the aforementioned games. Or other games. Or cows.

Yes, what are your thoughts on cows?
Login to vote this up!