Do You Miss Survival Horror? Then You Owe It To Yourself To Play ZombiU

4:19 PM on 06.11.2013 (server time)    0
Survival horror is alive and kicking. A couple weeks ago I finished playing Zombi U, and if you're into real survival, it's bloody fantastic. I know reviews have been mixed, and some of you may be on the fence or written it off completely because of that. Well, I'm here to right that horrible wrong!

Skimming through some reviews, it seems the biggest gripe some reviewers have is that it's not a FPS. Gamespot's review,the lowest of the bunch, finished with the line "ZombiU could have been an enjoyable action game". That right there tells you everything that's really wrong with the game in the reviewer's mind. ZombiU is a sometimes slow paced survival game. If you're into that, you're probably going to like it. If not, you probably won't.

At this point I'm supposed to briefly describe the game, but even that is difficult. I could say it's like a closed-world Dead Island, or like a melee-heavy Resident Evil, but that doesn't quite do it justice. ZombiU does its own thing.

The premise is classic Resident Evil meets the Walking Dead, with a twist: in another sign of the welcome influence of Dark Souls, each time you die, you will spawn as a new survivor, and have to recover all you stuff, minus the cricket bat and a handgun with 6 bullets, from your now infected corpse. If you die on the way, your loot is gone for good. In order to survive, you will become rather well acquainted with your trusted cricket bat. You will get big guns, too: shotguns, assault rifles, sniper rifles, etc, but you will still be relying plenty on the cricket bat, because ammo is really limited and each shot counts, far more than it ever did in Resident Evil, even in the "good old days". 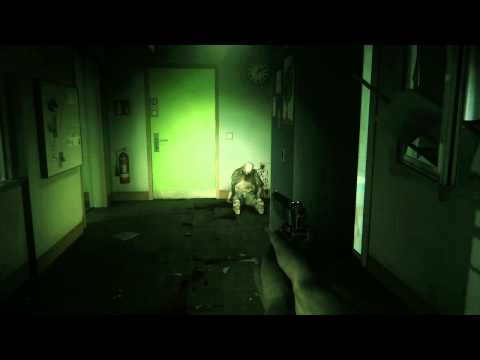 Nursery. This place is tense.

Zombi U really pulls off the survival horror atmosphere and makes you watch your every step, knowing that one mistake could be your last. This is no exaggeration, since you can be hit or scratched by zombies a few times, but if the infected sink their teeth into your tasty flesh, it's bye bye. Another cool twist, again clearly Dark Souls-inspired, is that other player's zombies will roam on your world, and vice versa, and the fact I didn't know about it made it so much cooler. So there I was, in the safety of my safehouse, about to get some sleep and save my game before venturing out again in the big bad world, and... I can't sleep now because there are zombies nearby. Didn't I kill them all already? So I go check it out, open the door, and lo behold, there is our very own Smurfee_McGee about to snack on my brain. No sir! I show him who's boss, and loot his corpse. It just so happens that I was completely out of ammo and only had one medkit left, and Smurfee's corpse was loaded! Ammo, medkits, flares, even a grenade! Smurfee, you're a life saver. Thanks man!

Another Zombie that routinely showed up in my world was Andy Dixon's, but seriously, he was just annoying. He never had any good loot! I killed him about 6 or 7 times, and most of the time he only had a lousy medkit, if that. Come on man, if you're gonna die, at least pack some ammo with you. Have you no manners?!?

This mechanic also serves to keep you on your toes. When you die, the Zombies you killed recently stay dead, so if you're confident where the zombies are you can safely rush to where you died... unless another player's zombie has entered your world and jumps you from that corner you were sure was clear. Guess how I learned that?

Zombi U also got high marks for it's Gamepad use, and for good reason. The best gamepad additions are the sonar, map, inventory management and scan. The map and sonar are a really handy combo, and help out A LOT. You also have six icons on the gamepad for quick item use, and there's a scanning mechanic that you use the gamepad to do. This last one could work just as well without the Gamepad, but it helps the immersion and is pretty cool. Plus, since you manage the inventory on the gamepad, the game doesn't stop and you can still be aware of your surroundings. That keeps the pace up, and saved my ass more than once.

Other gamepad uses, like sniping and lockpicking, don't really add much, but don't detract either. The only bad gamepad use for me is that to bring up the inventory you touch or drag the backpack icon, and it's located right in the middle of the gamepad, where your thumbs don't naturally reach. It's so obviously unintuitive, I'm surprised nobody caught it.

Another problem I've heard about is that supposedly there are some glitches and bugs. My guess is that they patched it out, because my game was thoroughly bug-free.

God save the queen.

Zombi U is not a perfect game, not at all. It is a testament to its greatness that it has "launch title" all over it, and it's still outstanding. The graphics are good, but have plenty of room for improvement. Most disappointing, you only have a single melee weapon in the entire game. I kept expecting to pick up something else, but it never happened. I checked online, and someone in the development team said they wanted to add more weapons, but didn't have enough time, which is a shame. The multiplayer, I hear, is very good, makes a really fun use of the asymmetrical multiplayer capabilities of the Wii U, and I've never heard a single bad word about it. Too bad I'll never know, because my friends are across the ocean and it doesn't have online. But hey, if anyone out there lives in Oslo and wants some practical experience with "integration policy", I'd be glad to help!

Knowing the game performed well enough for Ubisoft to consider a sequel made me feel all warm and fuzzy inside. With enough time to perfect the core game and iron out the kinks, ZombiU 2 could be one of the best games of the generation.

So, if you made it this far, thanks for reading this crappy blog and... kidding! kidding! kidding! kidding! I know you're still here because I'm awesome. Anyways, if you already have a Wii U or intend to buy a Wii U, and tense survival horror makes you tick, don't miss this game. You will thank me later.
Login to vote this up!