There's a good chance you don't even know about this game. If one of my neighborhood friends hadn't had it, there's no way I would have either. But destiny united me with Scooby Doo Mystery. 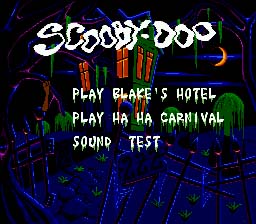 This game is without a doubt the closest you will ever get to a faithful adaption of an episode of Scooby Doo. Actually, two episodes. You can solve either "Blake's Hotel" or "Ha Ha Carnival." Two games for the price of one! Orange Box trendsetter what? 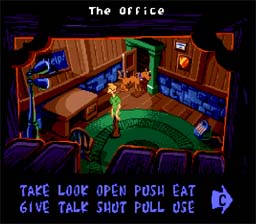 If you are going to play this game for the first time I would highly recommend the level "Blake's Hotel." It's classic Scooby Doo monster mystery set-up. The hotel is on some kind of sacred ground, a ghost is showing up scaring people away, the team is called in to meddle.

The first thing you will notice about this game is that it looks AMAZING. It has LucasArts' style slabbed all over it.

Basically you play as Shaggy with Scooby sticking by your side the whole game. You wander around, talk to people, pick things up, check stuff out, and try to not get stuck wandering what the hell you are supposed to do next. As a teenager, this game challenged me. I will go back and play it to see if it qualifies for the hardest game ever.

In summary, if you enjoy life and fun then this is the game for you. It's like Indiana Jones meets the Hardy Boys. And I don't mean like if the game were crossed with the book. It would be like if the two actually met and shook hands.

Look for tomorrows post to come from the adventure king himself, -D-!
#Community
Login to vote this up!