Yesterday I talked about one LucasArts gem. Today I talk about another.

My nextdoor neighbor introduced me to this and I actually sat and watched him beat the entire game in one sitting (I may not be remember that right). Anyways, Loom is just awesome. It's another golden nugget from LucasArts, however, this one was very different from other adventure games. You had to play musical notes and stuff to get past puzzles. I will now pull a huge time Copy Pasta from wikipedia to help me explain this because I will just confuse you.

A departure from earlier (and later) LucasArts adventure games in many senses, Loom is based on a serious and complex fantasy story. With its experimental interface, it eschewed the traditional paradigm of graphical adventures, where puzzles usually involve interactions between the game character, the environment, and multiple items the character can take into their possession.

Loom's gameplay centers instead around magical four-note tunes (drafts) that the protagonist, Bobbin Threadbare, can play on his distaff. Each draft is a spell that has an effect of a certain type, such as "Opening" or "Night Vision". Drafts can be learned by observing an object that possess the qualities of the relevant draft; for example, examining a blade while it is being sharpened gives the player the "Sharpening" draft.

Some drafts can be reversed by playing their notes backwards, so the "Dye" draft played backwards becomes "Bleach", while others, such as "Terror", are palindromes and can not be reversed in this manner. The player's abilities increase over the course of the game, with more and more powerful drafts. At first, only the notes C, D and E are playable, but by the end of the game F, G, A, B and C' (high C) are also available.

Loom was also the first game to follow the LucasArts Game Design Philosophy, which states that the player will never be killed or forced to restart the game and won't have to "spend hours typing in synonyms until [they] stumble on the computer's word for a certain object."

If it sounds like this game was ahead of it's time...it's because it really really was. The artistic style of the game is actually my favorite part about it - amazing. Since the game was released in 1990 I know now a lot of people have played it much less heard of it but I am sure ShawnKelfonne would agree with me when I say that this is one of those games that is vital when knowing your history of computer games.


Again, this is total abandonware - play it and keep in mind...it was made 17 years ago!


Along with -D-, we came up for the idea of this series, so expect iteration #3 to come from him. He can give you a hint if he wants.
#Community
Login to vote this up! 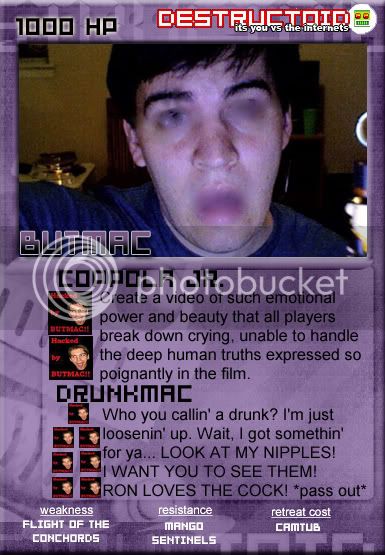