12:55 PM on 02.20.2008 (server time)    0
I'll be honest with you. I have a hard time choosing games for this series. It's not that often where a game can be universally hard for everyone. On top of that, I like to keep it fresh so while I could list off about 25 NES games, that gets old. And this game mixes it up alright. If you've ever met anyone that can beat this game then you've also learned something else about them. They are a liar. I present to you:

This is the first flash game to earn the title of 'Hardest Game Ever' and brother is it ever a deserving one. Hey Billy Mitchell? You think Donkey Kong is hard? Yeah?Fuck you. N is a man's game. Long mullets need not apply Billy.

In N you control the character of a Ninja. Your objective is simple. Make your way to a door to beat the level. However, there are some things working against you. First off is every platformer's most hated enemy --- time. To replenish your time you can collect little yellow squares sprinkled throughout the level. Each one gives you an extra second to your total time. Man, if only time was the only thing working against you in N, but, there's also mines.

Mines are little red spiky things that stick to walls or just lay out on the ground scattered. If you touch one you are instantly killed. You asplode in a bloody mess of legs and arms. This sounds like no big deal. I mean, just don't jump on the mines you asshole it's not that complex. Guess what? It is that complex because the placement of these mines are perfectly spaced and placed for annihilation. You may jump over one mine only to find out that there was a mine above you that just killed you. So the second go around you jump over the first mine, barely get past the second mine, and then bam, a third mine placed perfectly in your jump distance past the first mine kills you. Keep in mind, the clock is ticking. *sigh* 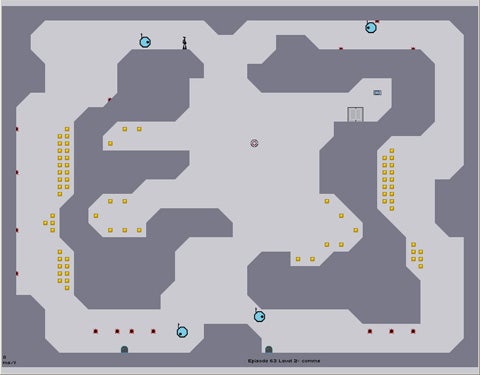 Somehow, neither time nor mine are the hardest parts of N. That honor would go to the many different enemies and traps throughout the game. There are laser turrets, fast moving electric barrels, and even homing missiles that try to kill you constantly. Here's a video someone made (with terrible text comments ftl) that show some of the more...insane insanity of N.

If you want to take a crack at the game then go here http://www.addictinggames.com/ngame.html.
#Community
Login to vote this up!