12:53 PM on 02.27.2008 (server time)    0
My first introduction to the whole "Tower Defence" (yes, that's how the Brits spell it) genre was a little game called...Tower Defence. It was made by Roman Sanine and my attempts to find out more about him have resulted in nothing. But basically, in the game, you have a castle with a winding path in front of it. Black dots will make their way down the path towards the castle.

Your objective is to keep this from happening by placing turrets along the path to shoot at the dots. 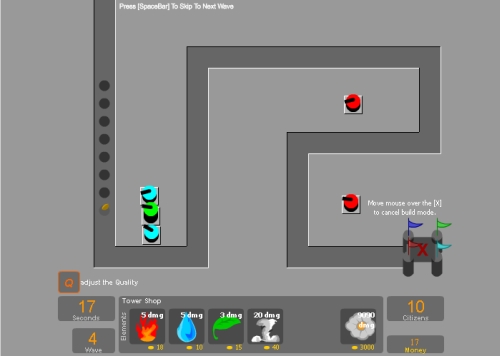 The graphics were extremely basic to say the least. It's clear that all the images were created in MSPaint (Oooh a programmer and a graphic designer! A jack-of-all-trades you are indeed Mr. Sanine).

About three or four months later Desktop Tower Defense was dropped on us. Now the main difference in this one is that there is no predetermined path that the enemies follow. That means YOU have to build your own path with the turrets you place. I'll admit that this idea did not sit well with me at first. I liked keeping it simple and figuring out the best place to put your turrets so that they did maximum damage, instead of you having to worry about what sort of path you should make.

So, I resisted. I didn't play DTD. My co-workers played it and said it was fun, but I liked the old school tower defence games.

However, when I joined Kongregate, I came across the game again as there were several badges (aka achievements) available for it. It was then that I realized I had made a huge mistake. Desktop Tower Defence 1.5 is a sparkling gem of gameplay fused with graphics and an artistic style that complement all aspects of the game, which is then married to a difficulty level that is the perfect amount of challenging for any type of gamer.

If you start the game on easy, you will have enemies you come onto the screen on the left side and will try to make there way off the table on the right side of the screen. If this happens, you will lose a life for each one that makes it across. To stop them, you have to strategically place different types of turrets to shoot at these enemies. Some turrets can hit units on the ground but not the air. Some can hit both, but don't do as much damage. Some can shoot four times as fast against air units, but are useless against ground units, and since a majority of the enemies come on the ground - is it even worth bothering wasting deskspace to worry about the air units?

It's situations like this that make DTD 1.5 stand out amongst the crowded Tower Defence genre.

Another good example lies in the structure in which you create your turrets. For me, I always make a winding maze of the cheapest turrets so that the enemy units are forced to take the longest possible route from point A to point B. I then upgrade my turrets in the center of the desk as much and as fast as possible so that they have a reach that covers pretty much the whole screen. 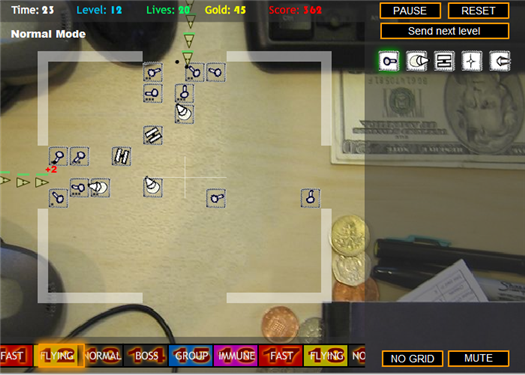 However, some people like to buy the more expensive turrets and place them in the middle of the map and deal out punishment that way. You will rarely play the same game twice there are so many options.

Go play it!
#Community
Login to vote this up!