10:31 AM on 11.05.2007 (server time)    0
To get inducted into "The Hardest Game Ever" let me remind you that the game doesn't have to be unbeatable. It does however have to make you cuss, swear, torture others, kick animals, and piss yourself in anger.

The final battle against Ares in the first God of War could have possibly gotten it into this exclusive little club. Then I played God of War 2.

I sure do love the parts where you have to turn a crank to raise a platform you are on, but if you stop turning it, it slowly goes back down. Oh and while you are doing that a neverending hoarde of creatures are attacking you so you have to pray that you have held them off long enough so that you can slowly push a lever. 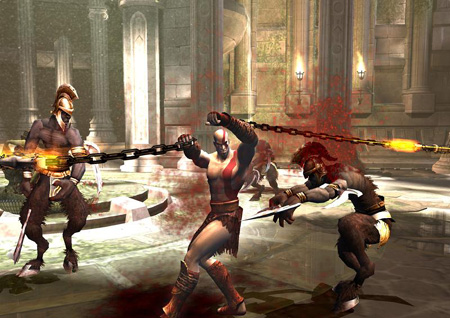 Or how about the time when you are attacked by not one, but two Cyclops at the same time (they always hit your weak point too. It does Massive Damage.) Oh and while you are fighting them trying to not kill them because you want to rip their eye out, you have these guys shooting missiles at you. Then when you kill the Cyclops, two more come out.

I haven't even fought Zeus yet but the battle with the Sisters of Fate took me an hour. I think the best way to describe the basic activities required of you is when my best friend Tim came over and watched me play and said, "Dude, this game asks a heck of a lot from you."

Yeah. It does.
#Community
Login to vote this up!