Deal or No Deal the Arcade Game Story When I first walked into this "fun center" type place, I couldn't believe it. The most uncomplex game show ever had it's very own arcade machine! It was even decked out to look like the set of the show. But still, one problem remains. Why the hell would you play Deal or No Deal when there is no money involved?

I mean all you are doing is just picking numbers and then eventually the game ends. So what could the arcade version possibly add that would make the game playable?


That's the one thing that gets in the way when translating a game show to a video game or board game, the fourth wall. You don't really gets moneys so it's like, why bother? Well, with tickets in the picture to exchange for shitty plastic rings, whoopee cushions, and chinese handcuffs (btw, are those rascist?) then the bar has been set for fun and adventure.

I walk up the the machine and think to myself, "Hey, this could be fun. I'll give it a go." Too bad for me there were about 10 people crowded around the machine playing and watching, none looking like they had any intention of leaving the machine. So I go away and play this:

Oh hell yes. I have this on the Wii and I like it a lot but had no idea they made an arcade version. Well apparently they did and it plays like a dream. The light gun that you get is more baller than Robert Summa at a Simpson's convention. As you can see it's a really intricate well made machine gun. Here's the kicker: it even has a switch right above where your thumb is when holding the trigger, so that you can switch firing modes! You can go from single shot, 3-shot burst, and automatic fire just by hitting the switch. Ridiculously awesome. Oh, and also you can choose your outfit. I was a WW2 soldier and my friend played as a Virtua Cop. I couldn't stop laughing during the cut scenes.

So by this time I decide to check back with Deal or No Deal. No dice. It's now just being hogged by a fat guy in a Clemson hat who was just lame. So once again, I go away and play....THIS: 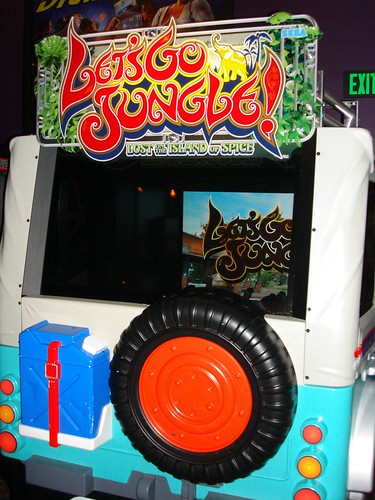 The game is Let's Go Jungle!: Lost on the Island of Spice. It's on of those game where you get into the cabinet and you have the curtains on either side of you and then you and your partner shoot at the screen with the mounted guns. [Note for developers: Best. Game. Ever. Anyway, the game is awesome with hilariously terrible voice-acting and an insane premise. You are in a jungle with a lot of giant bugs and spiders and you shoot at them as you are driving, running, and rafting through the jungle.

So, finally I wait for a kid to finish playing Deal or No Deal and my friend and his girl force me onto the seat to play. The briefcase with the most tickets has 200 in it while the least amount is 1. They are numbered 1 through 16. My friend tells me he thinks that the 200 tickets are in case number 9. I defy him, slamming my hand down on button 13 saying, "Twelve Disciples plus Jesus!" My faith was on display that night.

The game starts up. I choose 5 briefcases to eliminate. They were something like 2 tickets, 15 tickets, 100 tickets, 75 tickets, and 8 tickets. So the banker makes me his first offer of 29 tickets. I consider it. That's a lot of tickets for one game of something and I don't want to be an ass clown and leave with 1 ticket or something. But, I can't do it. "Howie, I'm gonna say NO DEAL!" I say as I slam my hand down on the flashing button. I have a small crowd behind me. I hear a woman laugh and it makes me happy. Now I have to choose four cases to elimidate. I do better this time. I eliminate the 1 ticket case and a couple other low ticket ones. The banker calls in his offer. He'll give me 41 tickets. My friend standing next to me begs for me to take it, "Dude! That is a lot of tickets man take the deal!" I can't. "NO DEAL," I scream once again to the delight of the people behind me. I press on and have to eliminate all but one of the cases. After it's all said in done there are two amounts on the board. 200 tickets and 40 tickets. The banker says he will give me 110 tickets to walk away. Everyone is shocked. 110 tickets is an absolute steal. I'll take it!


The crown behind me shouts in adulation. I rocket off my seat with an iron fist pump like the Panthers had just scored a touchdown.


Verdict: Deal.
#Community
Login to vote this up!