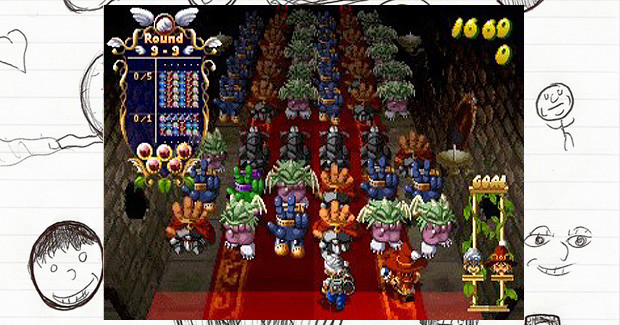 Anything Else? � Remember earlier in this series, when I said I was saving a few more �puzzle-shooter� recommendations for later? While these are certainly not clones of Finger Flashing, they play closer to it than to Calcolo, so here they are. Perhaps the best-known among these (relatively speaking) is Konami�s Quarth (aka Block Hole), which tasks you with shooting blocks at gap-ridden formations to fill in complete shapes (the recently-released Flame Tail has a similar vibe, though it draws more from Snake than shmups). More obscure possibilities include Dolucky no Puzzle Tour �94, Palamedes and Vermin Kids � Guru Logic Champ adds a Picross twist. If you�re willing to go out on a limb a little bit more, Zoop might also fit the bill.

Well, that should take care of your �free elective� course requirement; I hope you all enjoyed this little break from the usual song and dance. Next week we�re back to something a bit more traditional�but at the same time branching out in a new direction yet again. Want to find out what I mean? Make sure your butts are back in these seats seven days from now � it�s as simple as that. Until then, class is dismissed!
#Community
Login to vote this up!