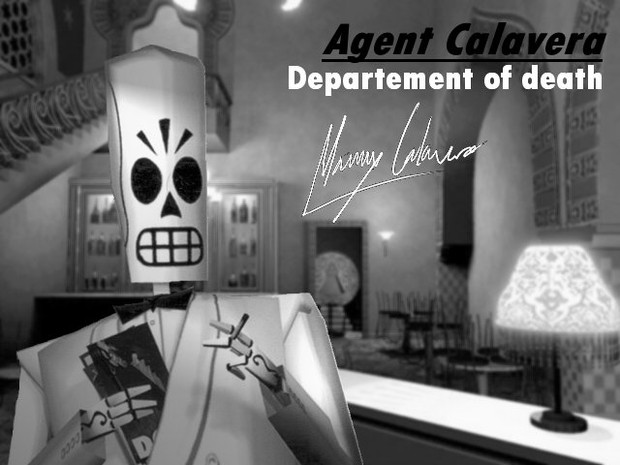 Manny Calavera is a Grim Reaper, a guy whose job is to guide the departed through the Land of The Dead to the Ninth Underworld. He works at the Department of Death. Crossing the Land of The Dead by foot takes four years; if you were evil when alive, you won't get much help and might not make it to the Ninth Underworld. If you weren't that evil, there might be people (well, un-people) willing to help you. Those who were very good when alive can ride the Number 9 train, which takes four days to make the trip, instead of four years. There are, however, some un-people tweaking the system - why can't everything go smoothly just once? I won't say anything else to avoid spoiling the great videogame that is Grim Fandango, but you can piece it together with this paragraph and the above one. If you made it this far, you're a smart person, so I know you can do it.

I wonder what Roger Ebert and Jack Thompson would say about that: videogames showing us what's wrong in our society and how we could fix it! That is, if Ebert and Thompson weren't the prejudiced jackasses they are.

In the end, it comes down to one thing: choosing your side. Will you join criminal law in its righteous quest for a safer society and a better future, or allow yourself to be seized by potestas puniendi and become a tool for interests that aren't your own? Of course, you could choose not to choose and let others deal with the situation. You should not forget, though, that there are people who want you kneeled, so you won't try to mess with their agenda. If
you choose neutrality, you may still be losing a lot, as potestas puniendi must be returned to its first place before it subdues criminal law. Criminal law accomplished a lot of things since it was created, but its struggle will probably last for centuries. Potestas puniendi, as it is, won't just sink into a hole and let criminal law instantly put everything on tracks again; practically no one can change everything all of a sudden. As long as I'm here, I'll help with my two cents: the real changes are made upon small, seemingly insignificant details in our daily life, not epic dreams about freedom, equality and such. We can influence the world around us with actions directed to these details; they might seem irrelevant, but can make a huge difference in the long run. If we don't do anything, potestas puniendi will craft an extremely harsh and unfriendly world to our sons and daughters and grandsons and granddaughters.

We can't let that happen, can we?
#Community    #OpinionEditorial
Login to vote this up!