Thoughts (so far) on the new TF2 War! Update 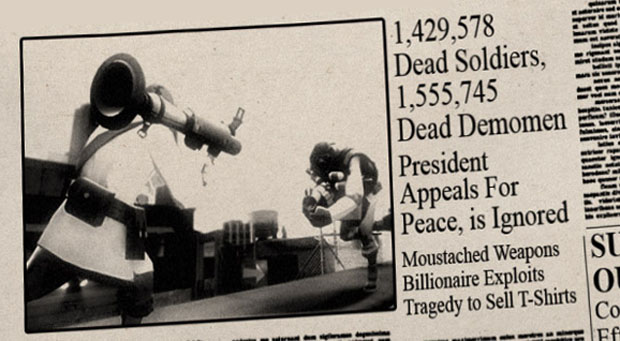 The latest Team Fortress 2 update's been out for a bit, and while I've been away all weekend, I've had a little bit of time to play around with some of the stuff in the new update. And hey, I've given my update thoughts in the past so far, so I might as well do that now, right?

Music: The two new songs are awesome, especially "Intruder Alert!", the background music from the "Meet The Spy" video. It's actually a full version of the song that's heavy on sax, and it sounds amazing. I honestly could listen to it half-a-dozen times in a row and not once get sick of it. A++ here.

Demoman's taunts: Wicked cool. The Eyelander kill taunt's pretty neat, but the real treasure here is the new butt-wiggling taunt that comes with the Scottish Resistance. Whether or not it's a mini-tribute to Braveheart (like I might argue the grenade launcher's "Kabooooooom!" taunt is), there's nothing quite like seeing the taunt and hearing the little squeaking sound come through your headset as the Demoman shakes what he's got in your face.

Soldier's taunts: The suicide grenade taunt is pretty cool, but the best new taunt is the replacement for the shotgun's old juggling taunt, featuring Taps playing in the background as the Soldier offers a 21-gun salute. It's a very nice change and a very fitting new taunt for our war-loving friend.

Demoman's weapons: And now, we get to the part where things aren't so fun. The Chargin' Targe and Eyelander combo is an absolute nightmare at times. It is avoidable, but even if you're not directly in front of a Targe charge/Eyelander swing combo, you can get decapped by this pretty easily. I'd expect some kind of nerf, however so slight, on the Eyelander by the time of the next update, just to give people a bit more of a fighting chance. Right now, in close-quarters combat, it's a guaranteed loss almost every time. The Scottish Resistance, though, is pretty much just a sidegrade for the sticky bomb launcher that gives you more control over which bombs to detonate. It works great for setting traps or defending capture points (or camping enemy spawns), at the expense of being harder to use since you have to be in sight of your bombs to detonate them with it. Doesn't work so well for maps where taking cover and using the old stickies (like Payload maps) might be a better solution.

Soldier's weapons: More problems for anyone who doesn't like to play Soldier, because Soldier's new weapons aren't side grades or items that give you an alternate style of play for the class: they are all upgrades. Though you lose the ability to be healed, the Equalizer is a much more powerful melee weapon thanks to the fact that the more damage you take, the more you dole out. The secret prize, the Gunboats, reduce rocket jump damage dramatically enough that there's little penalty for doing it anymore besides losing your shotgun. The new bugle weapon is also interesting, but over time, I'm not sure it will be a popular item because it's a detriment to you while it helps all your teammates. And hey, this is Me Fortress 2, not Team Fortress 2, right? [/sarcasm] Lastly, the Direct Hit is, you guessed it, an upgrade over the regular rocket launcher. The trade-off here is switching from aiming at player's feet to do damage to actually having to hit them, but it's something I expect many Soldiers will pick up on quickly. The whole update does unbalance the Soldier a bit, but it's not quite like the Soldier is going to destroy every single class now ... it'll just be a huge a pain in the ass to most of them.

Maps: So far, Doublecross and Gorge can best be described as having ... issues. Doublecross just feels kind of bland, like we've done a map like this before. Or that it's like 2Fort but with two bridges instead of one, which 2Fort kind of has already. Gorge has a great first point (and a glitch on Blu's spawn doors with the sticky bombs), but the second point can only be described as "choke point." It's possible to win there, certainly, but Red simply has to sit back and camp to win the round. I have seen Blu maybe win once so far on Gorge. Maybe it has to do with class imbalances due to the update, but until things get back to normal, it's hard to really give these maps a full grade.

Crafting: If done right, with new items being unlocked in crafting, it could be something great. As it is now - a way to get hats - it's not much of a system. I mean, yes, it's great if you don't have a lot of hats, though it might take a lot of time, there's no real incentives to craft yet because there's nothing special about it. Again, until we know more about what crafting has to offer, and until the crafting servers aren't going down every few hours, I can't give much of a grade on it.

Intangibles: No new "Meet the ..." video sucks. Not to mention the rampant Steam Cloud issues from the free weekend that came with the release. And the Sandman eats a huge nerf for Scouts, rendering the item pretty much useless. I've long since gone back to the regular bat anyways, since the no-double-jump enhancement was bad enough.

To be honest, with so much still unknown concerning the maps and crafting, I can't give the update my final thoughts yet. So far, though, it does feel like the Demoman and Soldier got a huge upgrade with few downsides (namely for the Soldier), more so than any of the other classes have received. I have noticed that, at least so far, Demos and Soldiers are having an easier time killing me, but I'm hoping that it's just temporary. If not, then the balance of the game might actually have been thrown off for once, and it'll take another Valve patch to fix that problem.
#Community
Login to vote this up!