Problems With Customer Support and Why It Needs To Be Fixed

7:31 PM on 06.28.2011 (server time)    0
As I'm writing this, I am just coming out of a recent call with Sony for a certain problem I was having, of which I received no help. Now, this is not the first time I've had a run-in with customer service with one of The Big Three, as you'll see below, and I'm sure it won't be the last. I'm going to share the experiences I've had with contacting Microsoft, Nintendo, and Sony and what I thought about said experience.

Microsoft:
I'm sure I'm not the only 360 user who has dreaded the inevitable call we were all going to have to make to send in our RRoD'ed 360's, and boy were we justified in our fears. I can remember vividly the first time I had to call MS Support, not because I got the RRoD, but because the video card in my 360 was on the fritz and I would see billions of black lines flashing all over the screen. When I explained this to the the first lady she simply did not understand what my problem was. I don't know if it was the fact that she didn't speak English properly or the fact that she never encountered my problem before. At any rate, I was transferred three times. I spoke to four different people before the rep sent me a box. I had to explain my problem four times, and I had to try the exact same solutions that I tried before I called and with each rep I was transferred to, until I finally got that simple response that I wanted in the first place. I did not receive any compensation for my four hours of time on the phone with Microsoft.

Almost a year to the day I got my Xbox back from the first time it was replaced, I was finally infected with the RRoD. I believe this was around the same time a lot of other people were getting this infamous console killing curse because I quite fondly remember waiting on the phone forever just to speak to a rep. I had no problem this time around, because MS was well aware of what was going on. The whole process took a little over an hour.

Almost a year to the day I got my Xbox back from the last time it was replaced, I was infected yet again with the RRoD. Three years in a row I've had my console breakdown. Three fucking years straight. Once again, I found myself on the phone for ages waiting to talk to someone. I got thru and got another box. Now I just needed to find something else to do for the next month, again. The thing is, I didn't get my Xbox back until three months after I shipped it. In between that time, that time I called a multitude of times, getting numerous apologies, explanations, blah, blah, blah. One day, I was just fed up with it all. I feel sorry for that rep, I really do, because the things I said to that rep should never be said to a human being ever. As a result I got a copy of Kameo, the collector's edition of Viva Pinata, and a plug and play kit. The sad and ironic thing was I got those things a month before I received my Xbox back form MS. Apparently what happened was my Xbox had just been sitting in the factory and forgotten about, even though according to the reps I spoke with my Xbox was "in the mail and should be arriving in a few days." Hmm.

Almost a year to the day my last Xbox broke down, it broke down again. Seeing a pattern here? Anyway, this time I popped in Marvel: Ultimate Alliance in to play some co-op with a friend. About five minutes in my video card completely came out of place, according to the rep I spoke to, and that they weren't going to be sending me a box this time. It had to come out of my pocket. Pissed about that I went on a rant about how this was my fourth time sending in my Xbox and that out of three years or so I've owned a 360, it broke down within a year. He then apologized a bunch and offered me a free game out of the list he had, except I already owned those games. Anyway, I got my Xbox back about a month later, but it wasn't mine. I got someone else's Xbox this time that had "Halo 3" written in sharpie all over it and the Halo 3 emblem drawn horribly in sharpie on the side. The opposite side had a horrid Halo 3 vinyl on the side. Ugh. The funny thing is I actually used this all the way up to my purchase of the slim last year the day that launched.

The Verdict: Overall the reps I spoke to were friendly and for the most part knew what I was talking about, albeit they couldn't speak English very well. The major problem was the time. It shouldn't take over ten minutes to send me a fucking box in the mail. It just shouldn't. Also, by taking well over an hour on each customer you're using up valuable man-power that could be taking care of the other thousands of customers having the exact same issue. 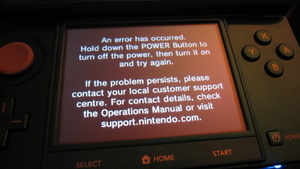 Nintendo:
This call took place about a week and a half ago. I was calling about the issue Club Nintendo was having on their site with the Legend of Zelda: Ocarina of Time 3D soundtrack. I was having this issue and I was directed to the Nintendo Support Line. Now, if you are ever having a bad day and just need someone to talk to who will be the most pleasant person you have ever met, call the Nintendo Support Line. I gave the rep some information, explained my problem, gave me product PIN, and I was on my way. Wow, that was easy.

The Verdict: Companies need to take note of Nintendo. Once again, Nintendo is at the forefront of the industry with their incredible customer support. When the rep apologized to me, it didn't sound rehearsed or forced. She could speak English. Fluently. She sounded sincere, human, like she truly cared about my problem and she was going to go out of her way to fix my problem. She did, because the soundtrack is on its way.

Sony:
This is call that inspired me to finally write this. So all day today I've been trying to get my hands on a Journey Beta code over at IGN. Well, I succeeded and put my code in, which worked, except for the fact I got an error when I tried to accept the user terms. I tried about ten times to no avail. So then I restarted the store and put my code in. That's when I was locked out from inputting codes. Fuck. I panicked and called the support line for Sony, and waited about ten minutes to speak with a rep. The first thing I was greeted with was, "What's your phone number?" Uh, that seems a little irrelevant and you can probably see my number anyway, but okay... Anyway I gave a little more info and and explained my problem. He told me to put in the code in the account management which unsurprisingly did not work. I gave him the error code I received and he put me on hold WHILE HE LOOKED IT UP. Okay, so he doesn't know the numbers by heart, I get that. He said, "I think you should wait 24 hours to put in that code because I just looked it up and it says something about waiting a whole day." So there's nothing at all you can do for me? "Uh, no, sorry about that bro." Oh wow. Just wow.

The Verdict: I got the feeling the reps at Sony have no clue what's going on or what they're doing. It was clear to me they don't have any tools to properly help their customers, I mean, can't they just get into my account and unlock it? Put the game in my queue? Look up another code? Absolutely nothing. I got no help from calling, whatsoever.

How can this be fixed?
So after all these calls and experiences I came up with the recipe for a great Customer Support line.

1. A pinch of sincerity. Seriously, a little sincerity goes a long way.

2. Add man-power to taste. Microsoft clearly did not have enough people to cover the floods of calls they were getting, which is sort of pathetic given they are one of the wealthiest companies in the world. When I called Nintendo, I got in first try even though I know they were getting pounded with calls all day.

3. One cup of tools. Sony was obviously neglecting to give their reps any proper tools at all to help their customers. Nintendo again is dominating this category, because I received a confirmation email stating Nintendo had gone into my account and manually added the game into order list. Don't be an interactive FAQ, be able to actually help.

5. Stir frequently. A little dedication also goes a long way. During the calls with Microsoft and Sony, I was put on hold frequently. This was annoying and showed the rep was not able to talk to me on a casual level and just be human.

So that's all I really have to say. A little quality control will keep your customers happy.

P.S. Microsoft? Sony? Why record the calls when you're not actually going to improve the quality of your customer support?
#ShareonCommunityBlogs
Login to vote this up!