Your mom knows, and she needs to talk to you about it openly.

Hi dear! It's mommy! How are you and your friends today?

Edit: It took 5 minutes for me to explain that my still camera wasn't on the internet

Really, she is. That's why we decided to do this to get it all out in the open. Her thoughts, her feelings, are all laid bare for all to see. You can't hide from this one. Mom knows and she's telling everyone that'll listen.

So, it's nice to have you here today. I'm so glad we could do this on such short notice.

Thanks. You boys are always so nice. I thought your mother was always so sweet. It's too bad your family moved away back in '85.

Well, of course, I remember you, you were in summer camp with my boy, weren't you? You boys...

So, today I'm here to discuss your recent revelation about your son. Was it difficult for you, to find out that he's so deeply invested in this controversial lifestyle?

Well, ever since Father passed on years ago, things have been difficult here in the house. I get so lonely sometimes and I sometimes think to myself how wonderful it'd be if there were grandkids here running around the hosue.

Your father would not approve of your lifestyle choices, you know...

Edit: Unbeknownst to your mother, your father actually did enjoy the same lifestyle as you, but kept it secret from your mother for fear of shaming the family.

Your father never realized that the joystick was meant to be HANDHELD.

But I realized after I discovered this news that there's no turning back for my boy. He's forever doomed to go to hell for his decisions. And mind you, this isn't that fancy hell with the MTV and Road Rules. This is the bad hell with eternal damnation and the weeping Jesus staring at you with angry eyes.

Your mother supressed her guilt again by cooking me a delicious meatloaf.

If you could sit down right now and stare your boy in the eyes before he made this lifestyle change, what would you say to him?

Clearly, your mother was upset at this thought. I broke off the interview and told her we could resume the questioning later on in the evening provided she was up to it.

Then your drunk aunt showed up.

So, the three of us piled into your mom's station wagon and we went down to the local bar. Some of your mom's swinging friends were already there.

Your mom with your "Aunt" Hattie.

We got seriously pissed on wine coolers and daquaris. And then we went bowling. 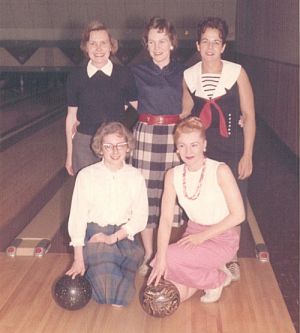 Afterwards, your mom was still pretty messed up from the daquaris, so we went back to your place, where she showed me your old bedroom.

Then your mom and I screwed.

Your mom all sexed up.

The next morning she felt a little bit better about the whole thing and decided to continue the interview.

Well, basically, I'd tell him to knock that shit off. He's got better things to do all day long than spend all day long reading about video games. He's a grown boy for pete's sake. He doesn't even own a Atari or Nintendo anymore anyway. But I know he's totally obsessed with those video games and I just want him to stop. I saw the other day on the news that they have this new Mario man game where he's in outer space? My boy couldn't possibly play that game. He didn't react well when Star Wars came out. He threw such awful fits and would throw things on the ground. I had to put a stop to it when he wanted to name his pet turtle "Darth" something. I don't know what it was, but it sounded like the devil to me.

Do you feel that it's possible that he may derive some positive influence from these games?

No. If there was then he'd call me more often. Last time I checked on him, he was sitting there at the computer box with a yellowed sock on his pee-pee. Lord only knows what he was doing before I came over, but he should have at least put some underpants on. For pete's sake!

Well, this has certainly been an enlightening interview. Any final thoughts?

If my son reads this, tell him he's going to go to hell if he doesn't change his ways.

That Mr. Destructoid is some sort of robo-devil man. Only pimps and drug dealers wear suits that white. I should know firsthand.

Also, I know about the Four and seven-chans and the baby jesus doesn't approve of it either.
#Community
Login to vote this up!