8:12 PM on 11.20.2012 (server time)    0
Last year Capcom made the surprising announcement of a new Devil May Cry game. While this would be good news to most, the thing that got every up at arms about it is that it's being developed by Ninja Theory, the developers of such games like Heavenly Sword and Enslaved: Odyssey to the West. Not only that, but instead of having the same character Dante, Ninja Theory made an entirely new character and named him Dante. All the backlash was due to the fact that Ninja Theory's Dante wasn't Capcom's Dante. This was even before gameplay was even shown. Now with the game releasing in less than two months away, Capcom and Ninja Theory have released a demo. Please keep in mind while reading this is that the game is TWO MONTHS away from release and may not represent the final product.

THE OLD AND NEW


After picking out your difficulty level, I played it on normal at first, game starts with a very rushed cut scenes telling you the story. It moves from one scene to the next without reason or context. It feels that this is a condensed version of the cut scene and the final product will explore a little more about this new Dante and the world he lives in. The original Dante was a likable cocky jerk. It kept the past games from being overly serious and knows it's ridiculous. This new one is rather bland it doesn't help that the voice acting sounds serious compared to the original Dante. In one of the levels you get to play in the demo, it seems he's almost that original Dante, but that scene ends before it got too ridiculous. We only see a little bit of the cut scenes, but this new Dante doesn't have the charm of the original. At least not yet. 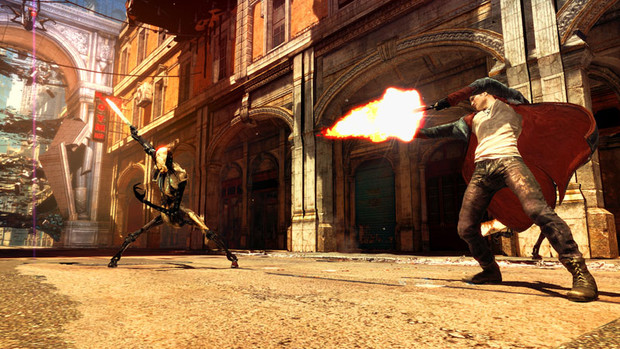 This new Dante, from the looks of it, doesn't seem to be like the Dante we know and love. The voice acting is nothing great, but it's not bad either. The past Devil May Cry games didn't have all that great voice acting, but because the way Dante was presented, the over the top voice over helped sell Dante. This new one just feels bland almost like he's bored most of the time. The cheesy rock is back and it helps, but there is also obnoxious dubstep in there also. This isn't so much about the game itself, but for most games out there; please no more Dubstep. While I don't mind having it in small doses, it CANNOT be part of the game. Dubstep just took me out of the game.