"If you want to test a man's character, first give him power" - Abraham Lincoln

Ken Levine returns to the world he created with BioShock Infinite. When the original BioShock came out in 2008, it received many awards and it's been called one of the greatest games of all time. While BioShock was good, it wasn't as good as everyone said it was. Repetitive fetch quests, a bit leaner, and a lackluster boss and finale, I just don't hold the high regards everyone else has. I found BioShock to be good, Nothing more, nothing less. BioShock 2 came out, and it wasn't good. It was just mediocre. Now, in 2013, we finally have a BioShock game that matches the hype, BioShock Infinite. It ditches the fetch quest style of the original and leads us to the path of redemption and loss. From the minute you step into Colombia, BioShock Infinite version of Rapture, it becomes apparent that this is American Propaganda overload. No matter where you turn, you will see the red, white, and blue. There was also racial overtones in the game, none of it was too offensive, but it does bring the racial war America used to have. The one thing that does shine brighter than that is the religious propaganda. The creator of Colombia is a reverend named Comstock, but he calls himself a prophet. He claims that God came down and to make the City one which this game is based on. If the original BioShock shows what happens if you give everyone too much power, BioShock Infinite shows you what happens if you give one man too much.

"Who is the happier man, those that lived life to the fullest or someone that just stood back and merely existed?" - Hunter S. Thompson (paraphrased)

You don't take care of her, She takes care of you

BioShock Infinite is an FPS adventure on which you have to save a girl named Elizabeth. For all the action and great gameplay BioShock Infinite has, it's nothing compared to Elizabeth. Elizabeth can take care of herself and can take care of you. It's like a reversed escort mission, instead taking care if her, she is taking care of you. She throws you all you need to survive the fight. And if you are down, she'll revives you. She doesn't help all the time, but most of the time she does. This might make the game seem easy, but it's not. The game is not too hard, but there area few fights that do require you to be careful. One of the best part of the game is the Skyline. You use a hook to ride in the skyline to go to one place to another in Colombia, and it can be part of combat also. This adds an exciting aspect to combat. Using the Skyline, it will make you be in constant movement, but Elizabeth won't give you items. It becomes a risk and reward aspect of the game that I didn't think it would be there. Elizabeth is this years Clementine. She's a fully established character that you can't help to care for. What makes Elizabeth work is the brilliant script and a great story. The voice acting is superb that makes you care for the characters. DeWitt is a likeable dick. The last 10 to 15 minutes of the game is so mindblowing that it's going to be hard for other developers to match it.

"We are Hummingbirds who are not willing to move" - Issac Brock 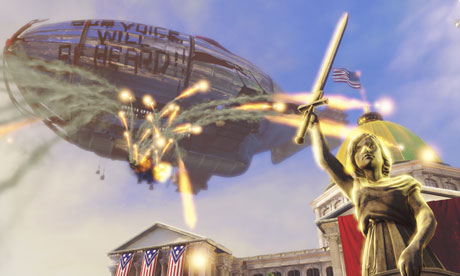 The action gets hectic at times.

In the nine to twelve hour game, there were a few moments that I would have either taken away, or trimmed down. There was a stealth mission that comes from out of nowhere, and it would have been entirely possible to miss it. The finale battle, while trying to be epic, didn't have that same excitement the rest of the game had, and one that I won't mention because of spoilers. That part happens in the middle of the game. The story, while still great, does falter a bit, but that one section ends just as quick, it's still equally important to the overall narrative. It just seemed that there would be more than that. But the worst thing about it is the fact that there is no carry over or new game plus. Like Tomb Raider, finding everything is just not worth it if it doesn't have carry over.

It's not often a game comes along and blows the hype out of the water, but BioShock Infinite did just that. The flaws that it has, even if one of them is major, is nothing compared to the rest of the game. Not only is it a strong contender to game of the year, but it'll be remembered as one of the best games of the decade.
Login to vote this up!