THIS IS THE WAY THE WORLD ENDS


In Assassin's Creed III, you play as Conner, a half British half Native American in the 1700s America. This was also known as the Revolutionary War. This takes place before, during, and after the war, but you wouldn't know that because the Revolutionary War is so downplayed, it feels like it was there just to justify the new engine the team at Ubisoft created. Despite a good 75 percent of the time you play as Conner, you really play as Desmond Miles as he continues reliving his ancestors past. It takes place right after Revelations, but if you didn't play it the game does give you a decent background to the series events. What was once interesting about the story about the war between the Assassins and Templars it is now one of prophecy and the end of the world catastrophe. By the end of the game, I cared so little about Desmond and Conner that the ending was nothing short of a confusing mess. Ubisoft just had to put that Mayan date into the story that it forced themselves into the wall and what ever happens next won't matter. There was nothing in the end that makes you want to know what happens next. If it had only stick to the war between the Assassins and Templars, none of this would have happened. 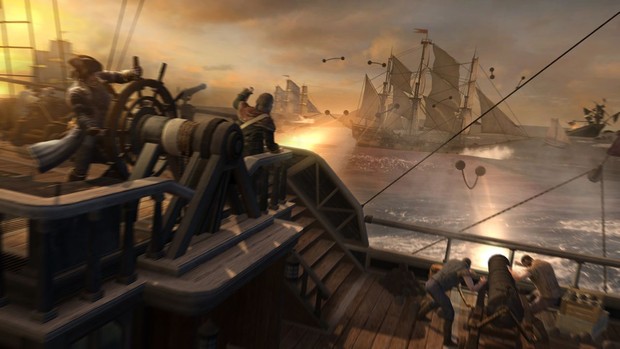 The absolute worst aspect of Assassin's Creed III is its main missions. A basic Structure of a mission is follow this person, get something, give that to another person, and mission end. There are a few great missions like the Boston Tea Party, and the raid of a fort, but they are few and far between. There is a lot of hand holding when it comes to the missions. You also have eavesdrop, tailing, chasing, and sometimes all three at once. You are more likely to fail the mission because your target was lost than actually getting killed. It becomes frustrating when you have to play the same tedious mission for 20 minutes because the game fails to tell you that it's in a strict time limit. There was this one mission that breaks the rules of the game. They try to put in stealth in a "Stealth" game, but it is used in such a way that it becomes more troublesome than anything else. That freedom you had in Assassin's Creed II is gone.


Not everything is terrible though. The combat, despite that large slow window, is exciting. Getting a cinematic kill is satisfying. The world of the Assassin's Creed III isn't detailed, but it's large scope of the areas is phenomenal. The world is busting with life that you will forgive having five of the same NPCs gathering together talking. You can beat the game, and still not see everything in Boston. The freerunning is simplified, and is now faster than ever. The most amazing aspects of Assassin's Creed is its Naval battles. You control a ship as you are out in the open waters battling the British Navy. It's exciting, fun, and unlike anything I've seen before. If there was one bad thing about the naval battles, is its that you have to see the ship your are firing at taking your focus away from what is ahead. It is very possible to hit rocks or another ship. The ship is easy to control, and easy to battle with. If Ubisoft wanted to, they can do a new IP about Naval battles and use this control and engine, and it will be a blast to play.

Assassin's Creed III is a massive disappointment. You have the makings of a great game, but having using the worst missions in gaming as it's main focus is not what studios should do. Maybe if there was upgrades, better hunting, better side missions, and a better story I might have forgiving it's use of hand holding, but as it stands, I can't. Assassin's Creed III is basically a remake of the original Assassin's Creed, but with a different setting. As of now, I am no longer interested in Assassin's Creed.
Login to vote this up!