Top 5 Reasons Why I Hate MGS4

Please don�t confuse the word �hate� with �I think this is a bad game�. Metal Gear Solid 4 is anything but a bad game. It�s a pretty damn good one overall. I literally bought a PS3 just to play this game. But this fact does not save it from my loathing, because I must weigh it up against the rest of the series� and for me, it comes up far short of its brethren. Far short.

It doesn�t even make it to the motherfucking starting line.

Ladies and gentlemen of Destructoid, these are the top 5 reasons why I hate Metal Gear Solid 4.

The C.Q.C. system in MGS4 was great. It added complexity from MGS3, and felt like a real upgrade. The problem I have with C.Q.C. is the bullshit write-off reason given for Solid Snake suddenly using a technique that isn�t even referred to until MGS3. There�s a codec scene that tries to explain Solid Snake�s use of C.Q.C. in MGS4 and not previously, but it falls flat on its face.

I hope I�m not the only one who thought this was a complete load. I�m not saying I don�t understand why C.Q.C. made the jump from MGS3 to MGS4, it�s natural to assume a system introduced in a previous game would be coming back. I�m just dumbstruck about the awful, multi-layered explanation that explains nothing at all. C.Q.C. was obviously a technique that Solid Snake made a decision not to use; for him to explain his use of it now as bodily reaction is foolish because he could obviously control himself enough to avoid using it before. It�s a total copout, and a lousy one at that. I�d have been more happy with Solid Snake coming to the realization that no matter where you get a weapon, it�s foolish not to use it if it can save your life. That would have at least made some sense.

While I understand that in order to get Snake into a wider variety of locations, breaking the game up into 5 acts makes a lot of sense. However, this approach still rubs me the wrong way.

Giving each act its own distinct opening and closing scenes made the game feel very disjointed to me, as if each narrative sequence is occurring in its own little vacuum. Previous MGS games have been broken up into parts (MGS2�s Tanker and Plant chapters, MGS3�s Virtuous Mission and Operation Snake Eater), but neither of these instances interfere too greatly with the overall flow of the narrative. Also, in both of these cases the starting chapter/act was fairly short, a light precursor for the real operation to come. In MGS4, it feels like the acts are getting shorter as time goes on (or at least that�s how it felt to me).

In MGS4, each Act is its own self-contained story and has its own unique terrain and gameplay. This is a good thing, but I think it could have been done in a more seamless way with less stops and starts. MGS3, for example, was able to maintain one consistent narrative, and yet still managed to seriously vary up its environment quite a bit without impacting the story with rather sudden stops and starts.

I�ve grouped these two things together, but this also includes (to a certain extent) elements from the previous two things on the list: C.Q.C. and Acts.

If there is one thing that drives me nuts about the gameplay of MGS4, it�s the fact that Snake is handed so many interesting and fun tools for dealing with enemy soldiers, only to suddenly stop seeing them after Act 3. Even during Act 3 it�s not wise to engage the soldiers in the areas, so let�s just go ahead and toss Act 3 in there too. So for more than half of the game, all of these new tools and toys Snake has come by become essentially useless (especially C.Q.C.).

Act 3 through 5 are basically defined by sneaking. This isn�t something I have a problem with, especially in a stealth-action game. No, the problem I have is that Acts 4 and 5 basically negate most of Snake�s newfound abilities and force you to lay on the ground and crawl to the end of the game.

In Act 4, the only normal patrol enemies you encounter are Gekko and Dwarf Gekko. Essentially your only option for this part of the game is to get through without being spotted, or get close enough to the exit of the area to get out just after getting spotted. With the exception of the boss fight in Act 4, there aren�t any soldiers on the field at any time, and the soldiers present during the boss fight are FROGS, which are very difficult to sneak up on/C.Q.C./engage. I don�t have a problem with them being difficult, just that they�re the only flesh-and-blood enemies in the entire Act, and they�re a bitch and a half to sneak up on and take out on top of that. In Act 5, it�s pretty much just the FROGS and a couple of Gekko, plus a couple of boss fights and one Hell of a quicktime event.

To be clear: I�m not complaining that the game gets more difficult as it goes on. I don�t mind that at all. What irritates me here is that the enemy types negate about half of Snake�s capabilities, and essentially reduce your tactics to crawling around everywhere. It�s pretty exciting from time to time, but it really kills off the action part of the game. I don�t want to be sneaking around because if I get spotted I�m going to get my ass toggled repeatedly by large caliber bullets six ways from Sunday, I want to be sneaking around because I am the predator and my enemies are the prey. Sneaking around your enemies isn�t very satisfying without the sense that you get to decide who goes home alive and who goes home in a body bag.

MGS3 got this sensation perfect. If you�ve ever played through The End�s boss fight (both normal and when he�s replaced by the Ocelot Unit), you know exactly what I�m talking about. Crawling through that jungle not as the target but as the hunter is a sensation that�s very hard to match. This is what I think of when I think stealth action, and it�s what I think of when I play any other MGS game. You�re not there to play hide-and-go-seek, you�re there to kill; you�ve got the skills, the weapons, and the equipment to do it, and do it with brutal, lethal efficiency without being seen. 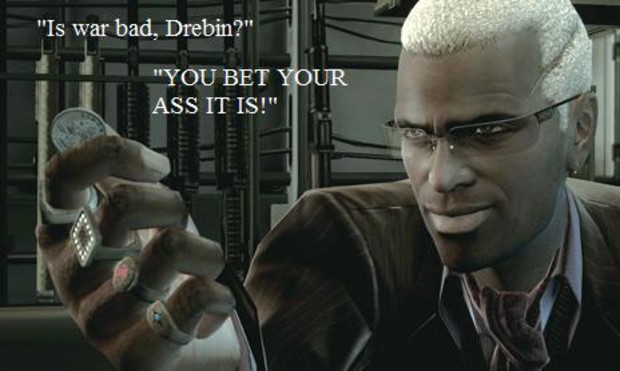 Exposition on the B&B�s themselves appears to have been a secondary effect of delivering this message, and it�s really a pity because some potentially amazing scenes between Snake and the demons of his past (the B&B�s codenames being links to FoxHound) and present (the B&B�s themselves and their connection to war and Liquid Ocelot/The Patriots) have been lost in favor of giving a new character more air time, almost as if to justify Drebin�s existence to the player beyond �that gun guy�.

In the end, I think MGS4 was a decent ending to an amazing series. Some of the scenes really blew me away, and had me totally floored. While I keep going back again and again to other games in the series, MGS4 keeps getting left by the wayside, because it just doesn�t quite measure up with the rest. That doesn�t make it a bad game, just not as good as the rest of the series. The moral of the story, I guess, is: You can�t win �em all. And also I hate MGS4.
#Community
Login to vote this up!