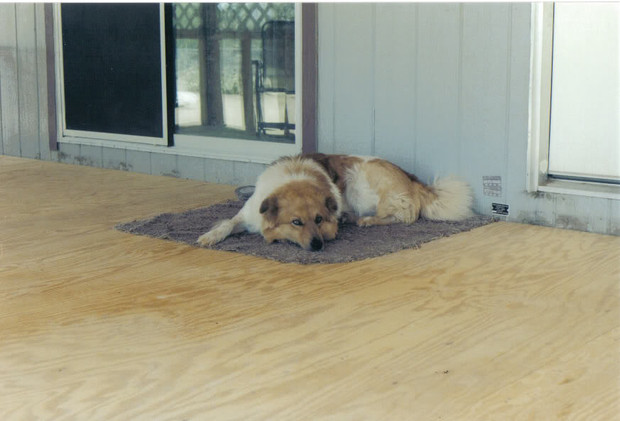 My dog died a few days ago. Not something I was interested in calling attention to here, or discussing at all at length with anyone. But then I saw this month�s musing post, and thought I�d write this up.

I met Charlie more than 11 years ago, when I was 12. I was spending a weekend at a friend�s house with my brother, who just so happened to live within walking distance of a decent little park and the elementary school where we�d first met one another. Together we would often go up to the park, or to the school, simply to be free of our parents and enjoy the weather when it was nice enough not to burn us through and through.

Charlie was a stray. My family has always had a thing about stray animals, as far as I know everyone in my family has had at least one pet that was a stray (or "foundling", as we call them). My grandparents on my mother�s side have always been nearly overrun by stray cats; either neighborhood cats that come to spend time with them, or strays that became part of the family. My mother has personally taken in a few animals over the years. My brother, too, stumbled upon a cat one Halloween and came home with him the next day. Charlie was mine.

On our trip up to the school, my friend and I were surprised to find two stray dogs picking at the large dumpsters at the rear of the school. I have always been naturally sympathetic to animals, and resolved myself to provide some food to these two. We wandered back to the house and procured some slices of bologna, which we then hand-fed to the two strays. Both of them were good sized dogs, certainly adults based on their structure, and both mutts. The smaller and leaner of the two was more excited at the prospect of people and food than the larger dog. I fed him the last slice of bologna and as my friends walked away, I quietly apologized that we didn�t have more. Then I walked away. It broke my heart, but I couldn�t do anything about it.

The next Monday I was waiting patiently at the edge of the parking lot of my junior high, entertaining the thought of videogames upon my return home. I was wrested from that thought as my mother pulled up, and in the backseat of the car sat that skinny, excited, dirty mutt that I�d hand-fed slices of bologna a few days before. As I entered the vehicle, sitting next to that smelly pile of fur in the back seat, I listened to the tale of how he�d come to be there.

My mother worked for the school district at the time as a teacher�s aide. She worked in a variety of roles, including as an assistant for special needs kids. At the time it was convenient because my younger brother was proceeding through elementary school, and she was able to take him in every morning and leave with him every afternoon before picking me up. That Monday, she had exited the school with my brother to find a scraggly looking dog sniffing around the rear doors of her car. My brother told her the story of the weekend, and how nice the dogs had been. My mother was bewildered, but she�s always been a quiet believer in fate. She opened up the back door, and with hardly any coaxing, the mutt jumped inside.

He was never trained, but only because we didn�t really have to train him. Under nearly any circumstances he would mind whatever I said; the rest of the family not so much. We came to have a solid bond.

Charlie wasn�t young by any stretch of the imagination. He lived a full life, and I�d like to think a very happy one. He was having trouble; constant heavy breathing, difficulty walking, sleeping often. Nothing any vet could do. For two days the issues were bad, and I spent most of my time checking up on him until finally on the evening of the second day, he went. Those two days were mercifully nice for desert weather, and that evening had been unusually calm and cool.

We buried him the next morning.

I wasn�t sure what I wanted to do with myself for awhile. I thought about having a drink. Or two. Or three. But the desire passed quickly, as I do not find inebriation terribly liberating so much as irritating. Eventually I just sat and stared at my TV for awhile before starting up my Xbox and inserting Mass Effect 2. I played for a few hours, and it helped me to put some time between myself and the event.

I escaped grief for awhile. A few hours away from thinking about something as destructive as death is can soothe a person in a lot of ways. They say that time heals all wounds; I don�t necessarily believe that it does but it certainly does help. Gaming granted me that time to occupy my mind with something more constructive, which significantly lessened the sense of pain and loss that had consumed me.

Edit: Yes, that is Charlie in the picture, being lazy on the back porch a few years back. As for how he got the name, well, he's mostly brown. So, Charlie Brown.
#Community    #OpinionEditorial
Login to vote this up!