Atelier Ryza: Ever Darkness and the Secret Hideout Review (Switch)

It's a real shame that this series perpetually gets screwed on the PC. The games themselves aren't too bad, but the problem is that their half assed ports make them seem lazy. Atelier Sophie has frame rate issues during the alchemy parts because it is capped. Atelier Lulua has the problem where the analog stick on your controller will mess with your mouse. Atelier Ryza on the PC did not even have keyboard support at release.

Reisalin Stout (Ryza) is a girl who is screwing around with her friends around town instead of helping out the Stout family farm. Her mom is pretty angry at this, but her dad enables her. They all aspire to do great things, but for now, they are stuck on the island of Kurken. A pair of strong strangers appear and are able to fight back a strong monster. From that point on, Ryza and her friends start taking their dreams more seriously with Ryza pursuing alchemy from the strangers. Gradually, Ryza learns more about alchemy while learning more about the town's history. It is revealed that the people of Kurken are scummy survivors who took the water from another world and built the island that Ryza lives on in order to hide from monsters. Monster queen is defeated, the end. It kind of ends abruptly.

The graphics have not improved much from the previous series (Mysterious). The character designs of the main cast are nice and varied, but the townsfolk all look generic as heck. At the beginning, it was hard for me to tell some of them apart. Most of the enemy models are also palette swapped versions of the same enemies with the bosses being larger types of those monsters. But, the series was never really known for their graphics, so it is not that big of a deal. The special moves are the flashiest, but even those are mediocre.

With every new "series", the Atelier games switch up the mechanics of combat and alchemy. The result is that the first in any new series results with the messiest version of the game because some of them feel rushed. Atelier Ryza is no different for that. Also, Ryza is another Atelier game without a time limit and more of a focus on Ryza's story.

By comparison to previous entries, Atelier Ryza has simplified alchemy mechanics. The previous series had a board for you to play with. But in this one, each slot has a certain type of item you can put in. Push the elemental and rarity levels high enough and it will get new attributes. It is still possible to loop items to get certain enhancements into items, but the restrictions force you to use specific items and have less freedom. Luckily, there is a search function for your items now to make looking for certain traits easier. You have more options later on as you can add traits to items that allow them to be treated as different item types as well as allowing to use more items in a base recipe. But since you can go past that limit by converting items to gems and then using those gems, it does not really matter that much and it is just a matter of whether you have items to sacrifice and the alchemy level needed to max the item. There are loops to boost item quality to the max, but the additional item loops just makes it feel tedious more than enjoyable. 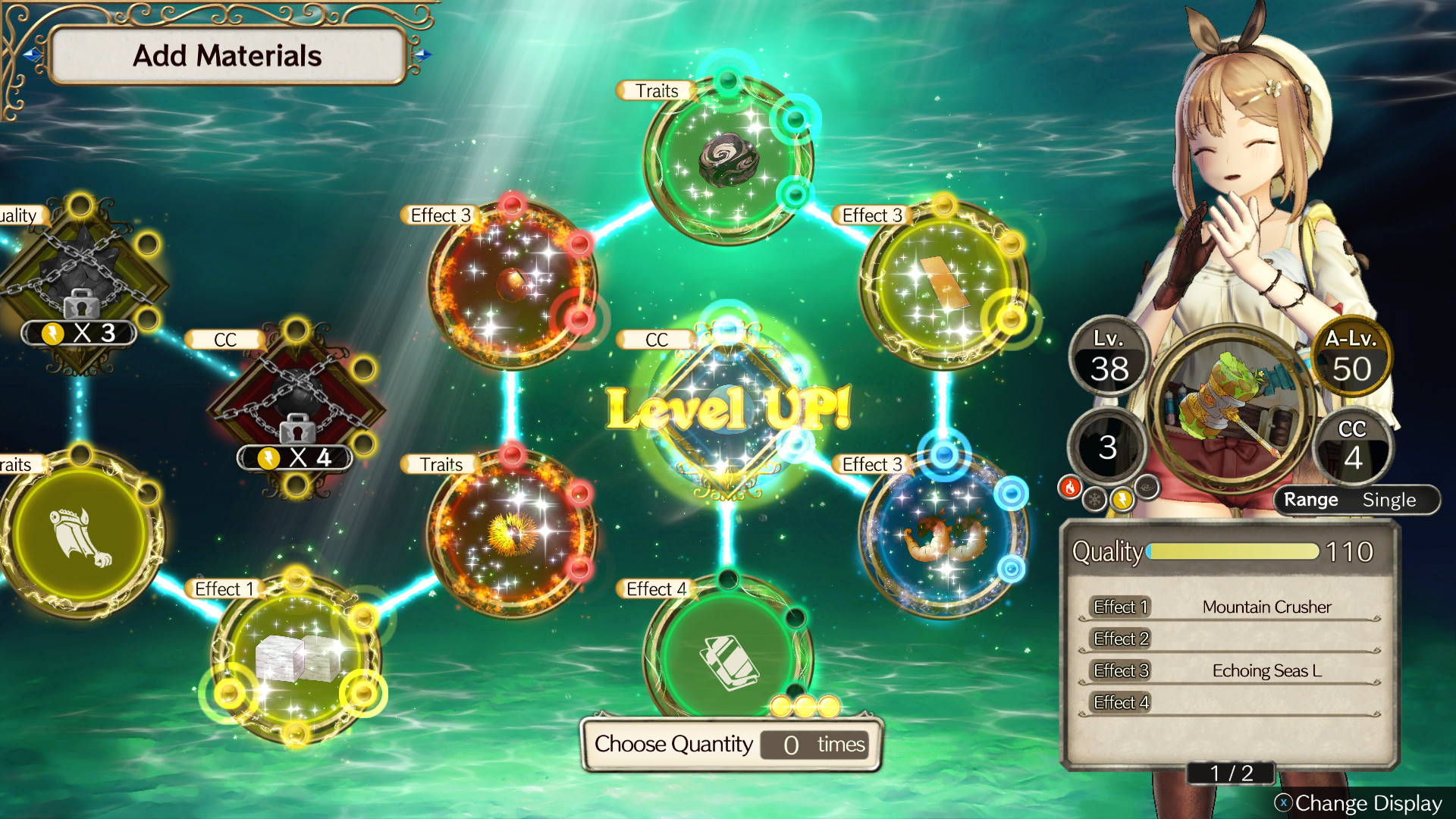 Combat is the worst part of the game. In the past, it was turn based, but this one is more of an active system reminiscent of some of the Final Fantasy games. With every attack, you gain AP. At certain intervals, you can level up your Tactics to unleash additional effects with skills and gain additional hits. While this is not bad in itself, the problem is that only the character that you are controlling can use skills. The characters that you are not controlling can only use basic attacks. And since they will use basic attacks the moment they are ready, they just become auto attacking bots and the game essentially forces you to build characters like that. You basically select one main to control with buffs, debuffs, and maybe heals while everyone else is focused on triggering additional effects with their attacks or assists. You can use 10 AP to have your controlled character intervene and get in an item or skill. 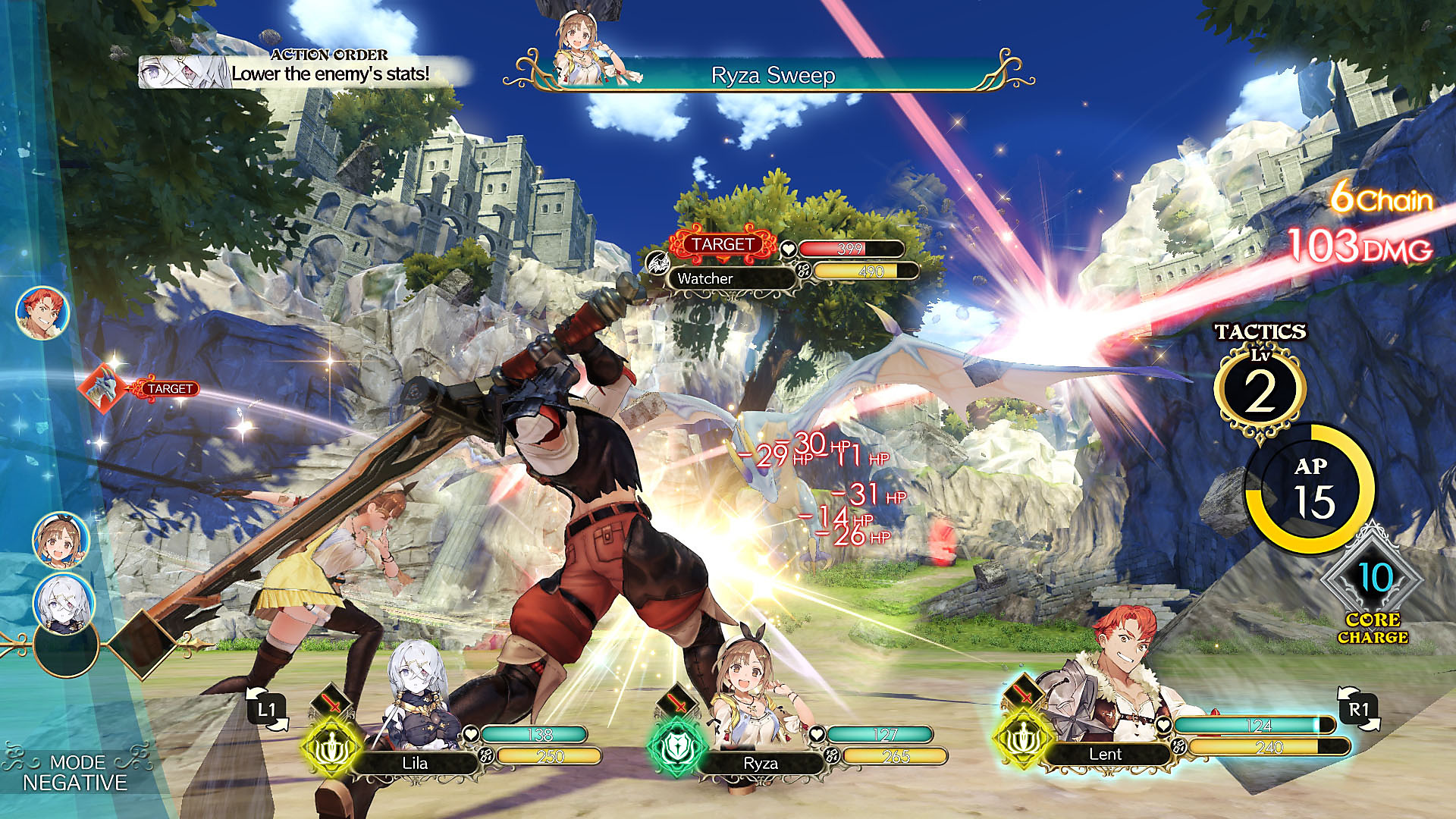 But with this change comes a lot of problems. For starters, the rear guard that slowly recovers while the frontline team fights no longer exists. You can only use the three you brought with you into battle. The addition of passive traits means that you are going to have to bring them into battle just to increase their status values anyways. Items are limited by the number of charges that you have and can only be recovered through battles with some characters. The problem is that by the late game, enemy HP scales up so that it might be more worth it to just avoid fighting since areas are short enough and you can return to the entrance of any area at any point.

Exploration is mixed for me. There are some hidden areas and you do need certain tools with the higher end traits to access some of the areas. The problem is that the tools start combining in the end game, resulting in just one item counting as two. This kind of defeats the purpose of having multiple tools to begin with. There are also a lot of items that are just restricted to one enemy in the form of bosses. The result is that you will easily have access to hundreds of logs, but not dragon parts even though dragons swarm entire maps. It just quickly turns into running to this one spot on the map because it has materials.

They do add some generated worlds to try to change thigns up in the form of flasks that require gems to unlock. But, they are heavily restricted and some worlds that you flat out cannot access because of flask or level requirements. When you appear in these maps, you will see that much of it is blocked off from you. A few items are restricted to these generated worlds because the drop rates for them in the rest of the game are just too low or the enemy was a one time spawn in other locations. The one good thing about them is that they can give very high quality versions of items that make them excellent for producing end game items.

The worst part is that you need time to pass for certain things to happen. For example, the drop rates are low from mini bosses that are locked onto certain maps, so it creates a sense to repetition where you have to walk all the way to the boss, fight it, do not get what you need 9/10 times, return to the Atelier so the boss can respawn, and then head back to the same spot. Quests are the same. Many of them have you waiting for a day before you can do the next part. The day and night cycle also means that even though the quest is listed, the NPC might not actually show up and there is no way to tell until you are inside. You just have to hope you have the right timing. If you do not, then head back to Ryza's house or Atelier and sleep and try again. Some main story quests have you doing nothing for three days, so it is literally just sleep, sleep, sleep.

Much like the first entry of each Atelier game, it is essentially a test run for their new mechanics. I dislike the shift towards the more active combat system and prefer the older turn based by far. Not having the ability to swap out characters in battle, not being able to control all three characters, and having extremely limited use of alchemy forces you into just focusing on one character while letting the other two just auto attack to victory. This is what really hurts the game as much of the strategy is taken out. The alchemy system is a bit simplified, but the addition of some nodes just forces you to take additional steps to loop around your high quality and does not do much to actually change things up since many traits are restricted. It just forces you to dismantle more items for gems to make the item you want. The alchemy system can be refined, but the combat system definitely needs to be overhauled.