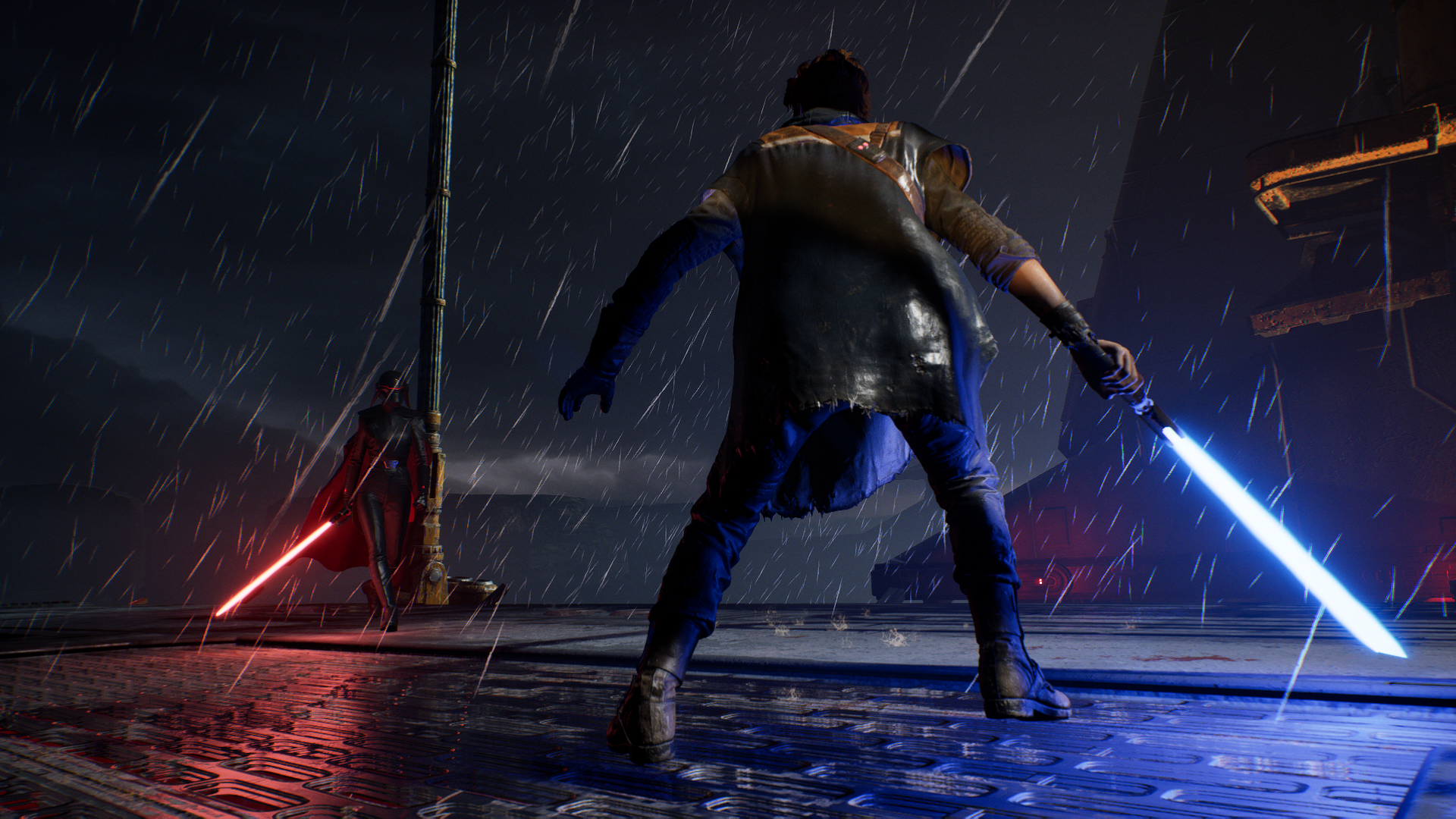 The Star Wars franchise is going through some interesting changes. While its recent films have disappointed many, the franchise has found success in other mediums. Television has been one of those successful mediums with the recent show The Mandalorian. Video games, on the other hand, are more of a mixed bag. There are Star Wars games of many genres, ranging from multiplayer shooters to dogfighting games and even card games. One genre that is new to both the games industry and to Star Wars, though, is the Souls-like genre, and Star Wars Jedi: Fallen Order is a solid first foray.

Order 66 was an event in which most of the Jedi were eliminated after being deemed traitors. This game takes place some years after that event, following a Padawan in hiding named Cal Kestis. After saving his friend from an accident using the Force, he is hunted down by Imperial Inquisitors, but saved by another Jedi in hiding. From there, Cal goes on the hunt for an object that reveals the location of kids who have the Force, but the Inquisitors are also after the same thing.

In terms of the game’s plot, it isn’t anything to write home about. Two rivals chase after something that will aid in their fight against each other, and bits of the past are sprinkled throughout to give greater context to these sides. I would describe the plot as an elongated movie plot, but I didn’t mind because I found other elements of the story to be much more interesting. For me, the characters and the game’s post-Order 66 world interested me more than the plot. The characters are fun to be around but are also serious when they need to be, and all of them are affected by Order 66 in a way that makes their bonding feel legitimate. Reliving Cal’s flashbacks as a kid or learning who the main antagonist really is doesn’t come as a surprise, but they are still heartfelt and emotional in a way I really enjoyed. All of it is accompanied by music that very closely resembles John Williams’ Star Wars scores, which I really enjoyed as well. Overall, I think the story side of this game is pretty good, with a nice set of characters and a good spot in the Star Wars timeline. 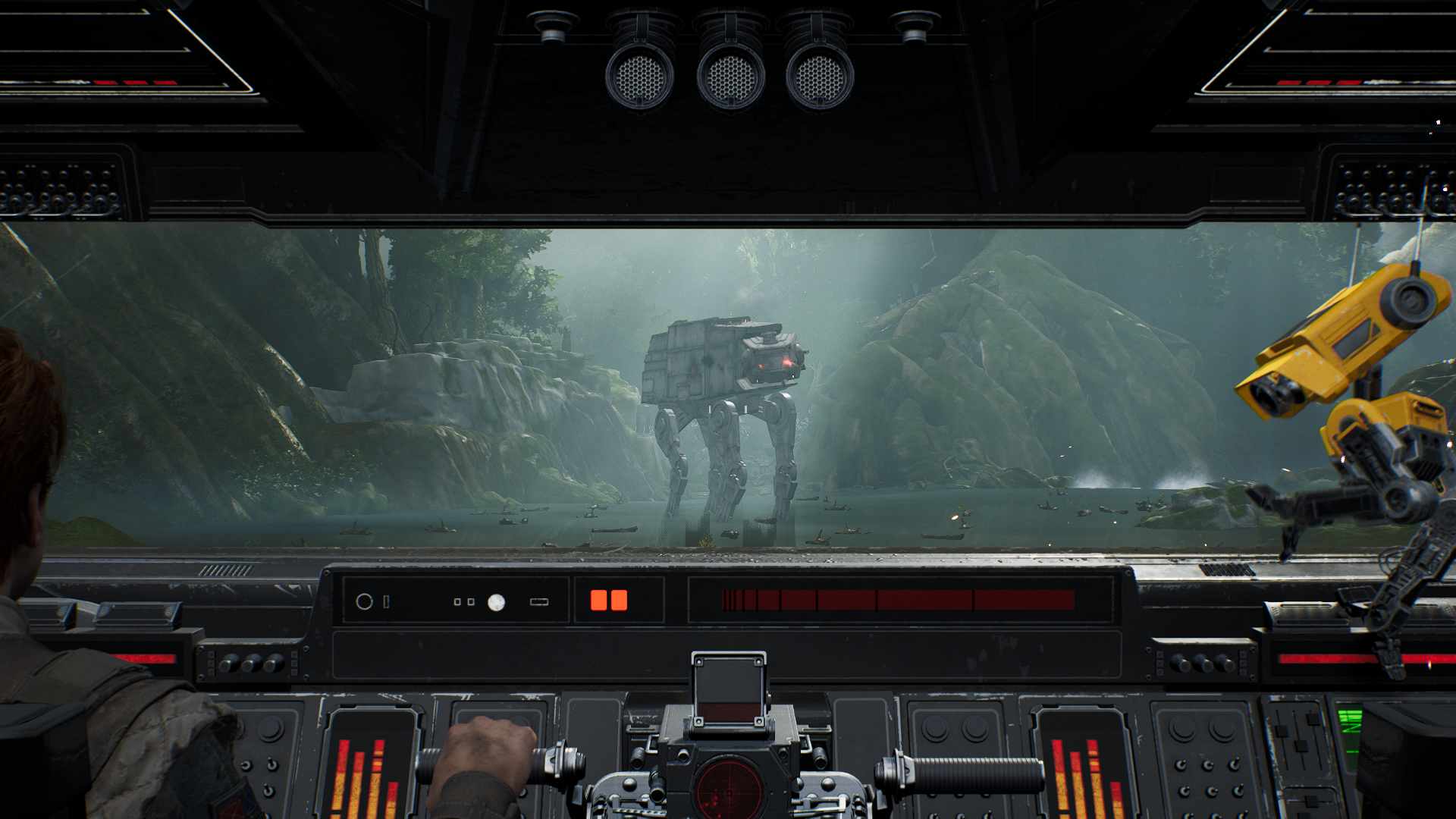 There are a few scripted sequences throughout the game that changes things up.

I made a reference to the Souls-like genre earlier, and for good reason. This game has many of the same trappings that Souls-like games have. At the same time, however, this game also has a few other game inspirations that keeps it from just being a Souls-like. The game’s high amount of platforming reminds me of Tomb Raider, while its worlds have a metroidvania-like quality to them. While none of it is new, all of those inspirations work well together, and I think having multiple inspirations is better than one so long as you nail each one.

In terms of the game’s combat, there is no doubt this is a Souls-like. Bonfires, precise dodges and parries, challenging boss fights, Estus Flasks, and more can all be found here. The difference here, though, is its Star Wars twists. In this game, you unlock Force abilities throughout, as well as some new combat moves. The Force abilities are a fun addition to the combat, and the combat moves adds some variety, but I found myself reverting back to the basics like hitting and parrying most of the time. The basics aren’t too reliable though, as for this game has a wide variety of enemies, both Imperial and not. Each enemy type has a weakness of some type, and learning all of them to effectively get through combat encounters is a lot of fun.

So, just how difficult is this game? In comparison to other Souls-likes, this game is definitely on the easier side, but that isn’t a bad thing. This game finds a nice balance between a power fantasy and challenging that makes it a lot of fun to play, though it does have a few faults. Timing on dodges and parries is a bit more gracious, most common enemies can be killed in one or two hits, I completed all boss fights within a few tries, and Force abilities like slowing enemies or pushing them off ledges helps a lot if you use them. At the same time, it’s a Souls-like, which means you can’t be a slouch. I really enjoyed the game’s balance, and I think it’s this balance that makes this game more approachable than other Souls-likes while still feeling tense and fun. There are some issues, like enemies being able to get a lot of hits in at once before you can regain your footing and the controls feeling a bit unwieldy (which isn’t good for a game like this), but overall the combat in this game is a lot fun. 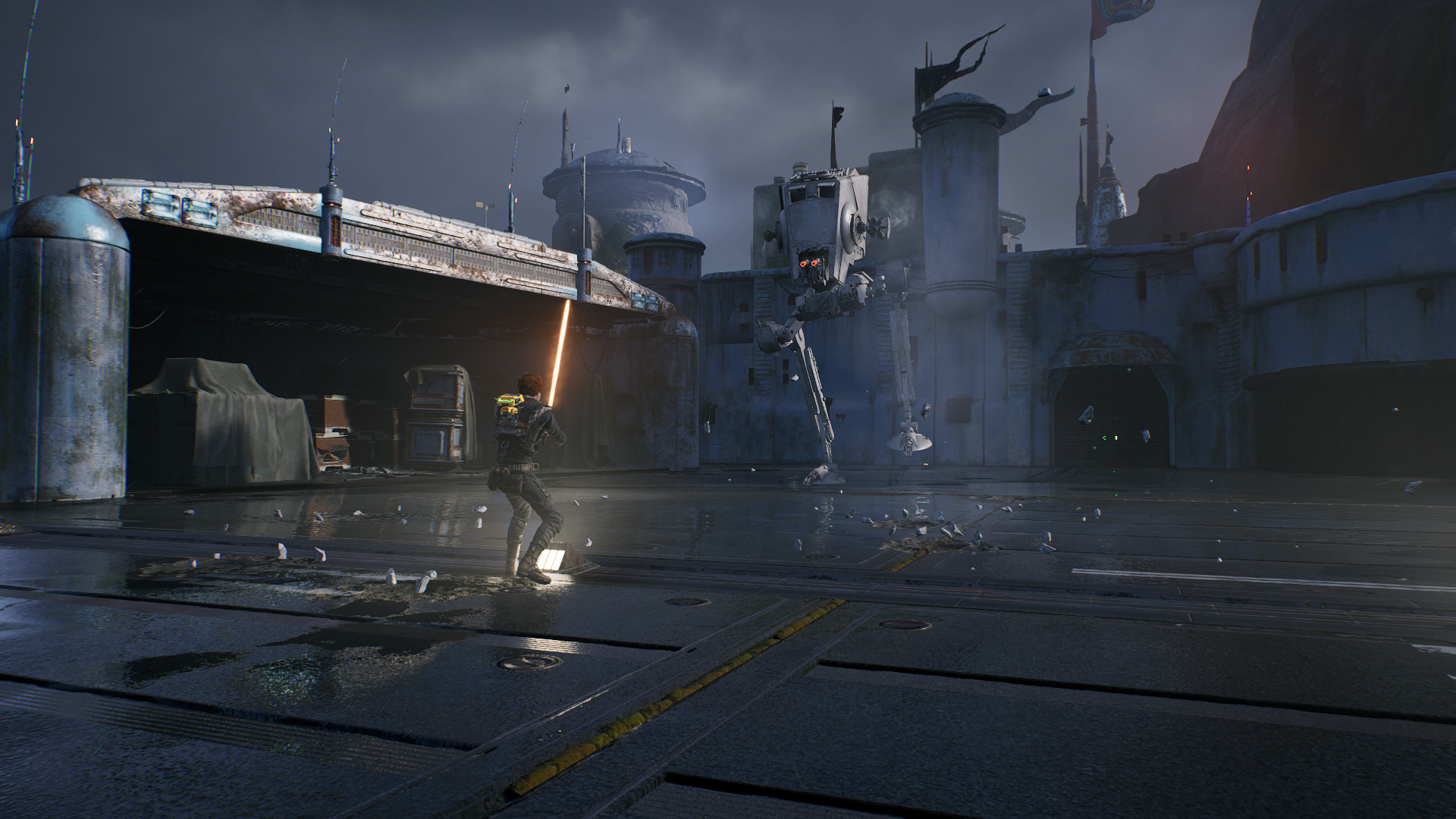 The boss fights are challenging, but they aren’t as difficult as the bosses from other Souls-likes.

Outside of combat, this game has five worlds to explore. This is where the light Metroidvania elements come into play, as for each world is filled with places to explore and items to collect, but in areas that are inaccessible until later on. Most of the items are cosmetics for either your ship, your lightsaber, your clothes, or your droid companion, but there are a few pickups that upgrade your health and Stim (Estus Flask) amount or give additional lore . Most of the cosmetics are fun and all of the lore bits are interesting, but I found the lightsaber cosmetics to be largely unnecessary. Since this game is third-person and a bit zoomed back, you can’t really see any of the lightsaber cosmetics outside of the color, making the rest of it rather pointless.

The worlds themselves are varied and beautiful, and some of them are surprisingly large. To help with navigation, this game has a great 3d map that is easy to use and shows all of the areas you haven’t explored as well as what to pick up in each area. What doesn’t help with exploration is a lack of a fast travel, which a few of these worlds desperately need. One highlight of note are some fun puzzles that remind me of Breath of the Wild. These are huge, level-sized puzzles that often use physics, and I had a lot of fun solving them. Plus, if you get stuck, your companion droid will offer hints, which I think all puzzle games should have. Overall, the worlds in this game are a lot of fun to explore, but a lack of fast travelling made getting around annoying.

Another name to have come up in all of this is Tomb Raider, and for good reason. This game has a lot of platforming, which shouldn’t be surprising considering the developers also made Titanfall. I thought it would be insufferable at some point, but I actually didn’t mind it much. As you progress, you learn new moves like double jump and wall run, and there is even a point where you learn to climb faster. Some of the platforming moves are pretty fun, but some of them also feel a bit janky. Wall running feels mechanical, which is annoying considering how smooth it is in Titanfall 2. My biggest annoyance with the platforming, however, is the sheer amount of it. All of the climbing, wall running, sliding, and overall platforming makes each place feel like a jungle gym instead of a natural world, which broke the immersion a bit for me. Later on in the game, you deal with jump pads and strong wind gusts that makes the game feel even more unnatural. The platforming is fun, but I think its high amount doesn’t blend well with the worlds it presents. 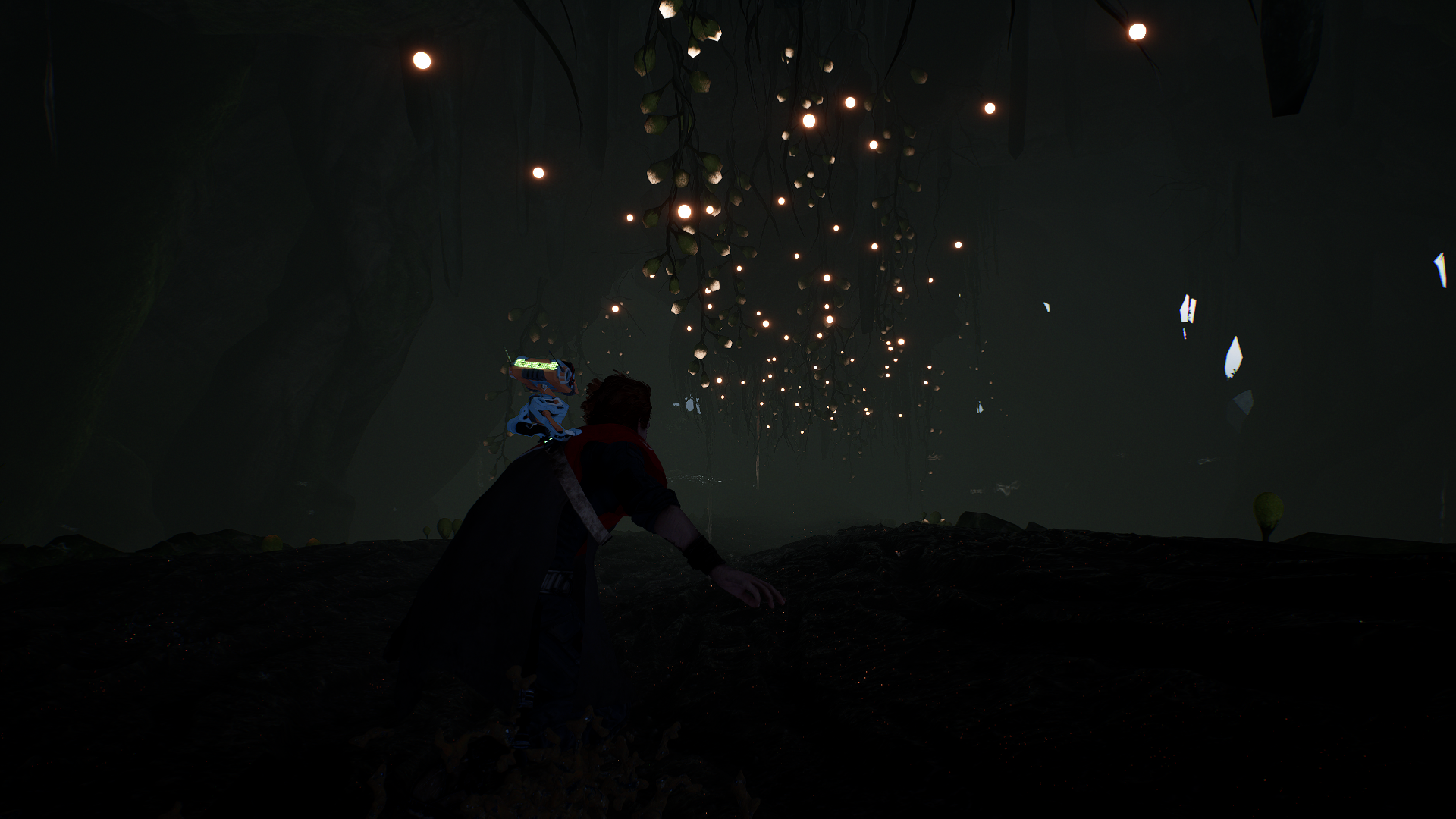 There are a lot of sliding. And I mean a lot.

Performance is a big issue for many when playing this game, so how was it for me? The game wasn’t bad for me, but wasn’t good either. I had small issues throughout like Cal’s poncho blowing all over the place and Wookiees looking terrible, but nothing game breaking. My biggest issue with the game on the technical side was the overall performance. The game chugged for me throughout. The framerate was never consistent, and the whole game felt like a house of cards waiting to be blown down. It wasn’t unplayable, but it certainly wasn’t good for a shipped game, and I expected better from Respawn.

In conclusion, Star Wars Jedi: Fallen Order is a solid addition into the Souls-like genre as well as to the lineup of Star Wars video games. The whole experience feels a bit clunky, but it marries a few inspirations well and adds a Star Wars twist to its gameplay and story that make the overall experience fun and original. It isn’t the best Souls-like I have ever played, but I think it’s a great entry point for newcomers into that style of gameplay, as well as a fun one for veterans to try out.

P.S. you can find a screenshot gallery here.