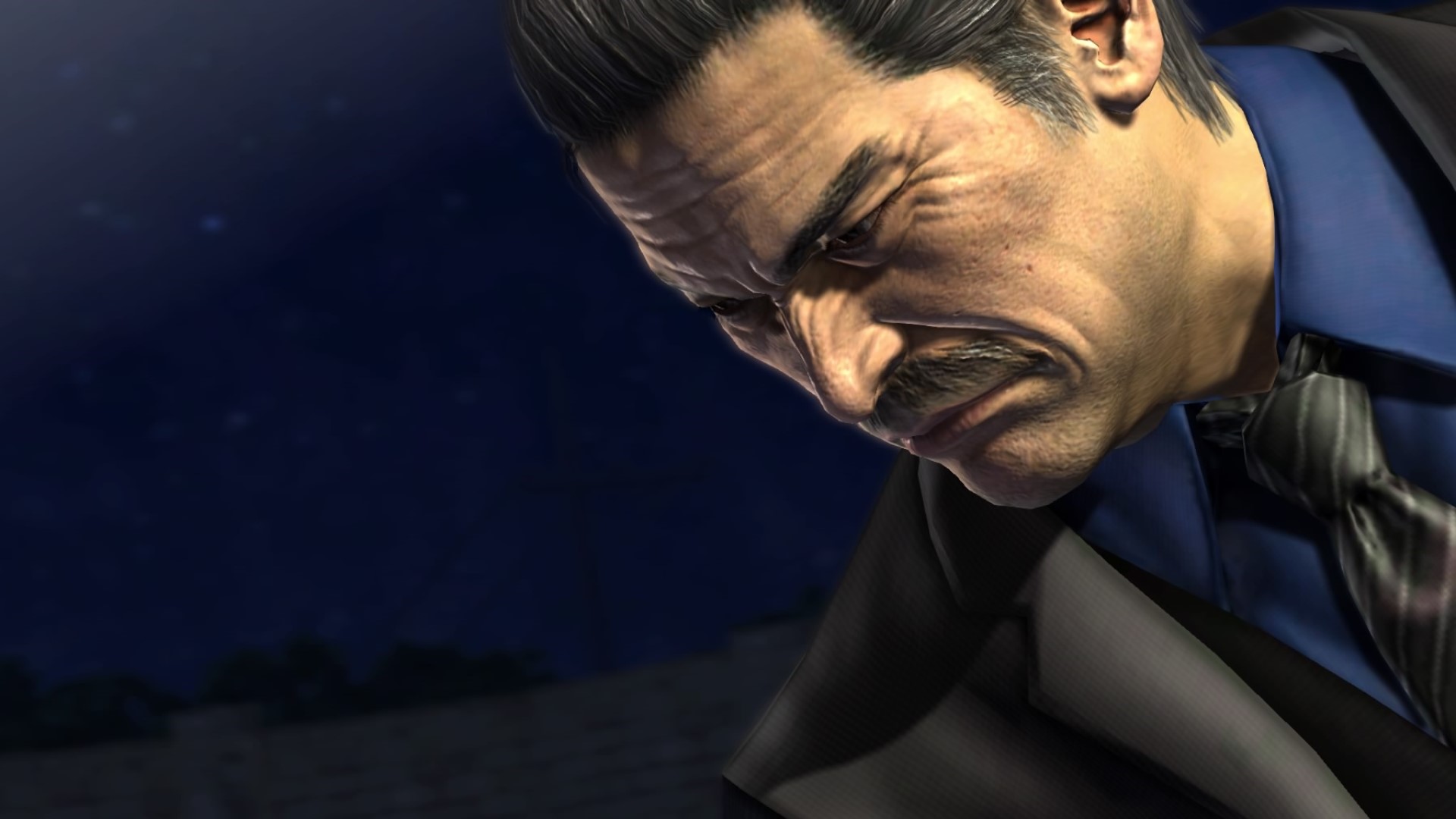 “Just when I thought I was out, they pull me back in.” This is a famous quote from The Godfather Part 3, but it also applies to the life of Kiryu. It’s funny to think that a game about the Yakuza stars a character whose been out since the first game but keeps getting dragged back in, and Yakuza 3 is no different. As always, you can find the rank itself at the bottom.

Kiryu has left city life behind and started an orphanage in Okinawa. While life seems normal on the small island, behind the scenes it is anything but. Two separate individuals, Minister of Domestic Travel Yoshinobu Suzuki and Minister of Defense Ryuzo Tamiya, are fighting over the land Kiryu is on for different reasons, and it wouldn’t be a Yakuza game if the Tojo Clan weren’t involved. Kiryu, back out of retirement, is now fighting to keep his land, but things aren’t so simple.

Kiwami and Kiwami 2 are full remakes, with the second game being on their new engine. Yakuza 3-5, however, are only remasters, which means the gameplay hasn’t been touched that much. While it doesn’t look and feel as good as Kiwami 2 and first-person walking is gone, I found the differences between the two to be surprisingly small. Not only is this game not far off from the recent Yakuza games I have played so far, but I actually found a few of the areas that are scaled back to be more enjoyable. Where downscaling as a positive can first be seen is in the story.

The Yakuza stories so far have been these convoluted tales full of twists and turns; and while this game still has that, it also has a simpler tale going on as well. On one hand, you have the crazy story that includes Kazama, government conspiracies, and trying to take down a secret arms trafficking syndicate. On the other hand, however, is a story of Kiryu taking care of kids in an orphanage and befriending a smaller Yakuza family who is more involved with the community. These two stories clash in interesting ways while at the same time keeping everything more grounded in reality, which was a big issue I had with the last game’s story. This story feels more personal, with stronger character bonds and more personal issues with trying to raise orphaned kids, that makes Kiryu more mature as a character and the character arcs that happen among the people he is surrounded by more believable and interesting. At the same time, it still retains a crazy story that I have come to know and love, but with better ways of explaining the story like a profile tree that explains each person’s background, motive, and connections to each other or cutscenes that come at just the right time to fully explain the situation at-hand. The only issue I had with the story was with the antagonist, which this game didn’t really establish until the end and overall didn’t feel as strong as Ryuji Goda from the last game. The story takes a step back in ways that I think benefit the series and Kiryu, and I hope to see this dynamic in future games. 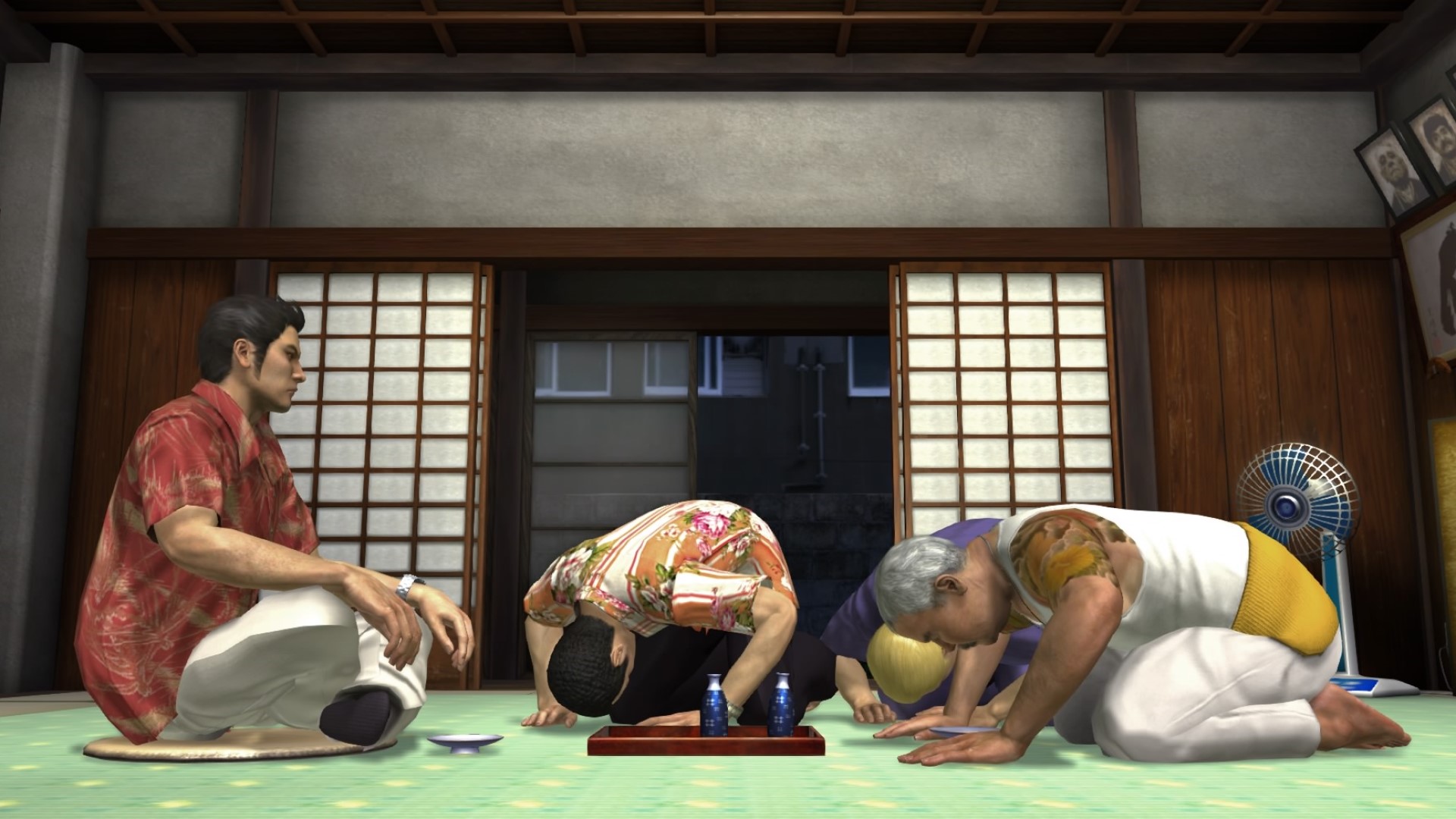 Alright, maybe Kiryu doesn’t escape the Yakuza life, but at least the Ryudo Family has a better moral compass than most other families.

Over the past three games, the Sotenbori map has been in-and-out, but this game replaces that map with a new one: Downtown Ryukyu. This beach city isn’t as big and doesn’t have as many activities as Kamurocho, but it plays to the dynamic of the story in a way I enjoy. Throughout my experience, I found both the story and the side quests in Ryukyu to be a lot simpler and more mundane than anything happening in Kamurocho, and this feeling of simpler living on the beach really shows a more mature Kiryu truly trying to move on with his life. Kamurocho is its same old self, but the new map plays to the story in ways I enjoyed, even though the size and amount of content is smaller.

This game wouldn’t be a Yakuza game if it didn’t have combat, and this game is no exception. I still miss being able to switch between different fighting styles, but I think this game nails fighting. The fighting style in this game is lighter and faster, closely resembling the rush style (my favorite of the three). The combat in this game is less flashy, but weightier overall. Punches and getting punched have more impact, the guys you fight get bloody, and there is overall less spectacle and flashiness to it. It feels grounded, and I hope to see the combat evolve from here. Another cool feature of the combat is the ability to mod weapons. There are weapon recipes throughout that create unique weapons similar to Dead Rising, and it actually gave me a reason to care about weapons again.

What isn’t so great about the combat is everything else surrounding it. The “roaming” thugs don’t roam anymore. They instead stand still in the middle of the crowd (which are a lot larger in this game), are incredibly difficult to dodge, don’t show up on the map, and are everywhere. The upgrade path is much more restrictive, with all abilities falling under five categories, and upgrades go to the category itself rather than upgrading a skill tree to your liking. Item storage is small, with Kiryu only being able to carry twenty items, and equipment and weapons are counted in the same inventory slots. I forgot if the previous games were any better about this, but it still sucks here. Finally, this game includes a new running mechanic where you occasionally chase a guy down the street, trying to keep your stamina in check and watching out for various obstacles. It’s truly a terrible mini-game that this game tries to use throughout, as trying to constantly hit the guy you are chasing gets annoying and the obstacles drain stamina in really dumb ways. This game’s combat is my favorite of the Yakuza games that have a singular combat style, but I think there is a lot to clean up around the edges.

For this game, I mostly mainlined the story, then focused on all of the activities and whatnot in Premium Adventure. To no one’s surprise, this game is very similar to the others in terms of activities, side quests, and more. Locker keys, a lot of the same mini-games, Sega arcades, lots of restaurants to eat at, Purgatory and all of its activities, and more can be seen between this game and the previous ones. There are some new activities and changes to old ones I’ll get into, but it feels like the overall changes to Kamurocho between each game is shrinking. 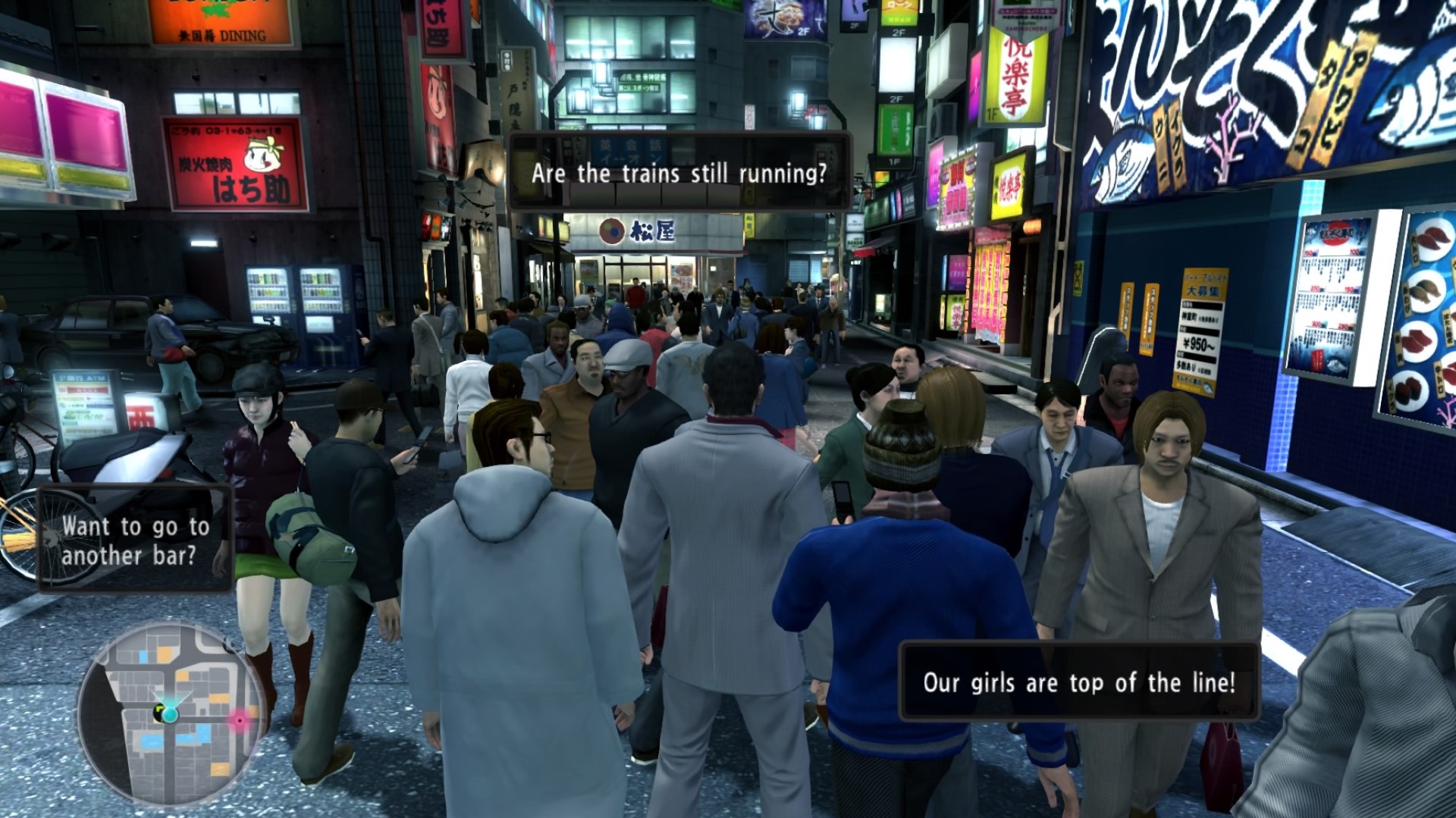 Yep, this is Kamurocho alright.

The first place I usually start in regards to activities is with the big mini-games. This game doesn’t really have any big mini-games, but there are a few I would label as medium sized games. The hostess mini-game (the one where you talk to hostesses, not the Cabaret manager one) returns. Golf is fleshed out to include a proper golf course and the use of all clubs. One of my favorite activities in this game is about trying to solve a crime, and this has its own profile tree where you interview people involved with the case and use evidence to solve the murderer. Finally, there is a new hostess mini-game where you train individual hostesses in a club in Okinawa and try to boost their stats by getting feedback from club-goers. It feels like a stripped down form of the club manager mini-game, but it was still fun nonetheless. There still hasn’t been a big mini-game to rival Yakuza 0’s business mini-game for me, but Yakuza 3’s mini-games are still fun to play.

Outside of the higher tier of big-minigames are the new or changed smaller ones. New notable mini-games include the hitman mini-game, revelations, and aroma massage. The hitman mini-game involves tracking down hitmen using clues and fighting them for money. It’s nothing special, but some of the personalities are fun and it’s a really good way of raking in some dough. Revelations involves taking pictures of an interesting situation and writing a blog about it as a way of learning new moves. These situations range from a grandma landing a flip on an electric scooter to an oblivious kid dragging his father into an adult toy store, and I found it funny to see the move you are about to learn being done inadvertently by the people you are taking pictures of. And it wouldn’t be a Yakuza game without a pervy mini-game, which is where aroma massage comes in. In it, you balance a bar in a meter to get a high score while your masseuse poses. It isn’t as bad as the photoshoot mini-game from Kiwami 2, but it’s still certainly weird. Finally, in terms of changed mini-games, the only one I found of-note was a significant downgrade of karaoke, as this version has no flair and Kiryu doesn’t even sing the lyrics, instead just making sounds to the beat of the song. The smaller mini-games have a few hits and misses, but they are still fun to play. 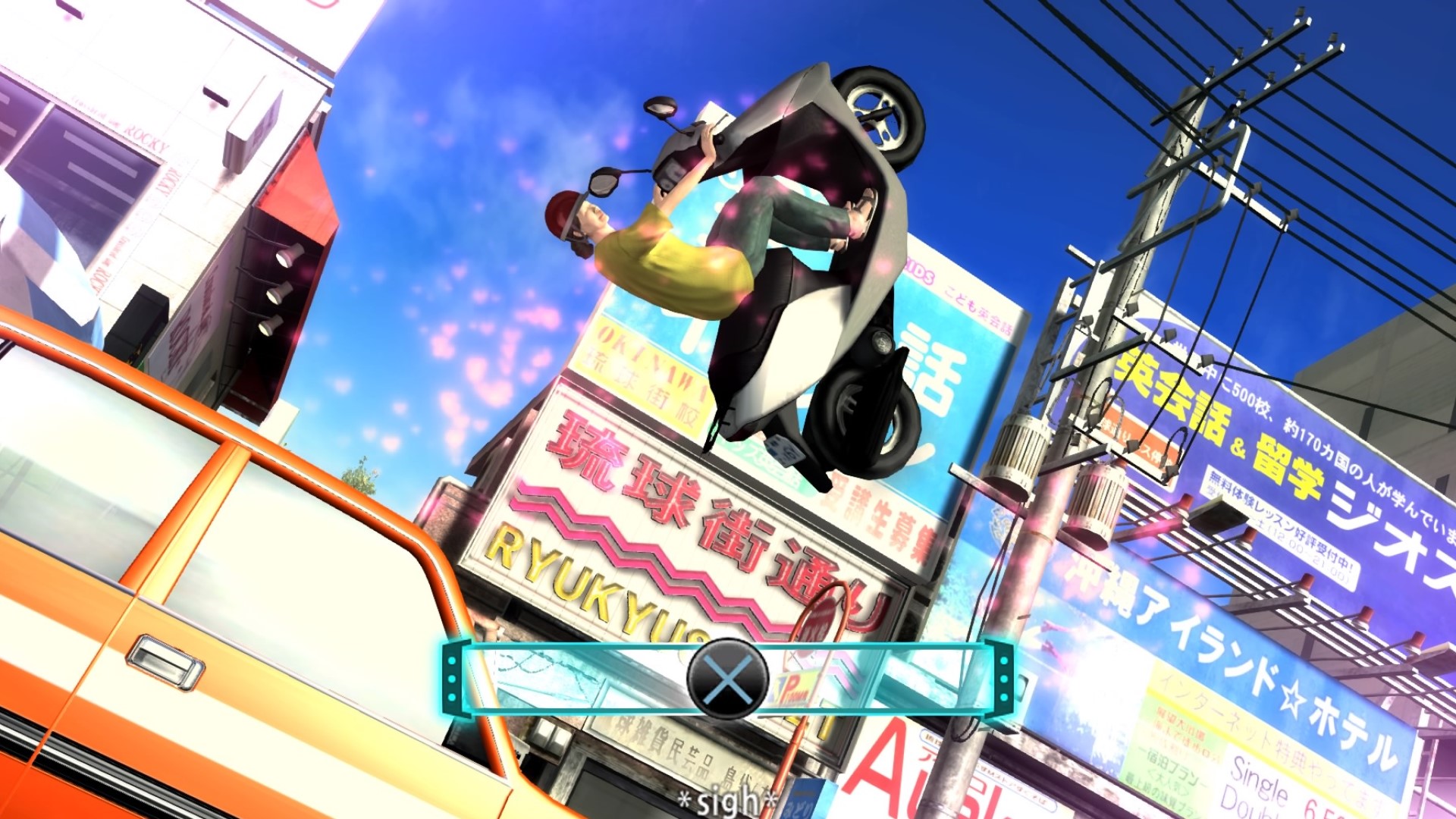 One could say this is a picture-worthy moment.

Premium Adventure isn’t the end of the content in this game, however, as this game also has extra stuff outside of the main game. This game has the usual two player mini-games and combat encounters, but there are two new additions as well. Battle for survival is a mode where you travel around the city in search of boss fights. All leveling is reset, and whatever you fight before the final boss is what you get. The other new mode is survival tag, which is a mode based around the chase mechanic. Both of these modes are pretty lame and not fun to play, but at least they are extra modes you can skip.

In conclusion, Yakuza 3 is a surprisingly solid game that takes a step back to tell a more personal tale. Since this is the oldest Yakuza game I have played gameplay-wise, it’s not hard to see the areas that need improvement and have been improved in the more recent games, but most of what I know as a Yakuza game is there. This was the game I needed out of Yakuza, and because of that I am putting it in the number two position behind Yakuza 0.