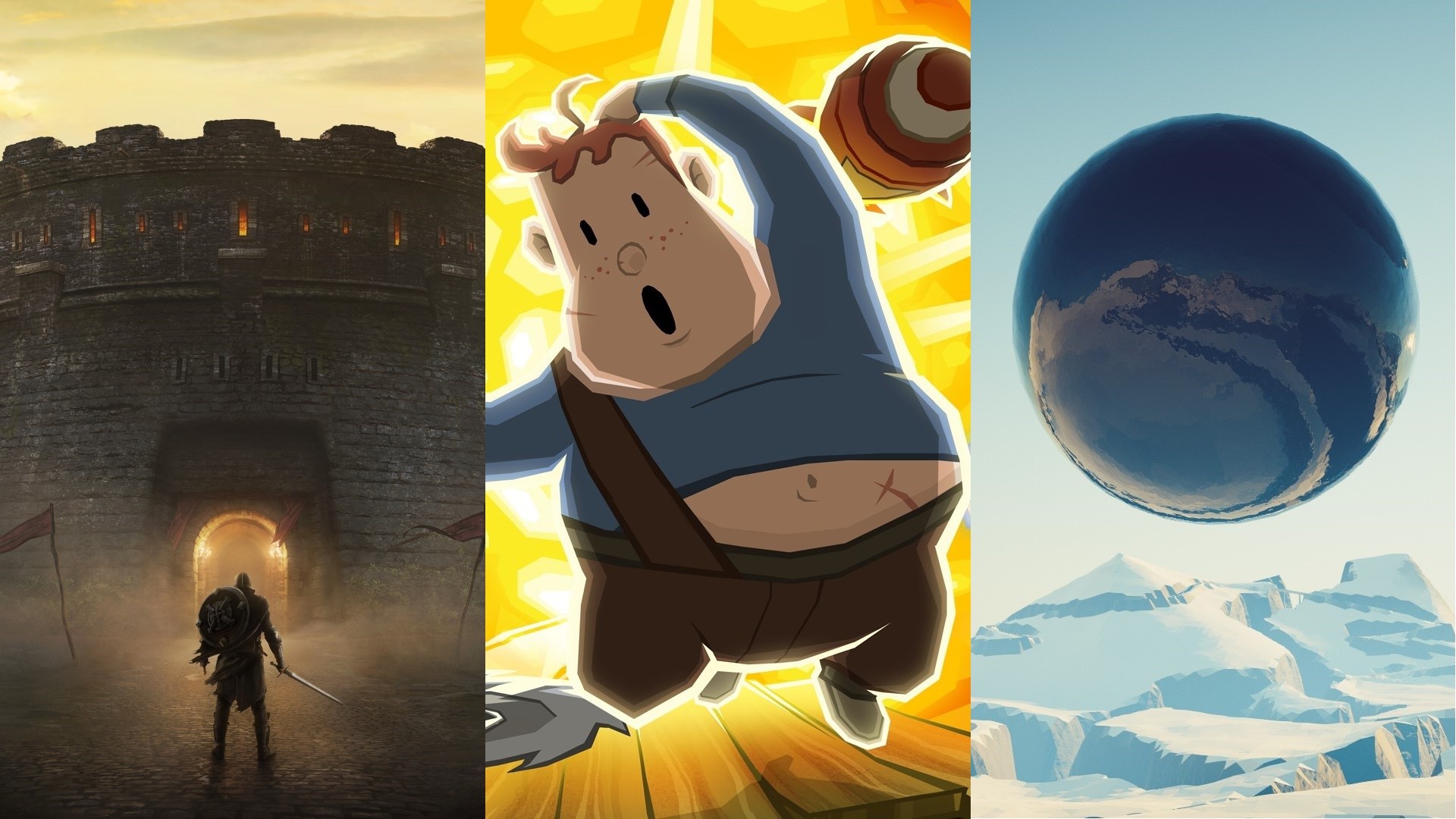 The Elder Scrolls: Blades is a free-to-play game released onto mobile phones and the Switch about dungeon crawling and rebuilding a town. I’m not a fan of mobile games, but the concept of grinding generated dungeons to rebuild a town sounded neat to me. So, I waited for this game to release on Switch, and here I am talking about it now. If you’ve ever needed a great example of mediocrity, then this is the game to look at.

The place where ES: Blades falters is with its combat. How combat works is that you lock into an enemy and you can’t leave until they are dead. You use the triggers to swing left and right, the left stick to raise or lower a shield, and some face buttons for abilities. It sounds simple enough, but the combat feels incredibly clunky and hard to use effectively. Trying to attack, dodge, and use abilities at the same time often felt unwieldy, and I ended up resorting to swinging and soaking damage. There are some neat things about combat like trying to time how long to hold down the attack button to get the most damage, stunning enemies with a perfect block, and some neat combat abilities, but I think turn-based combat would do much better for a game like this. 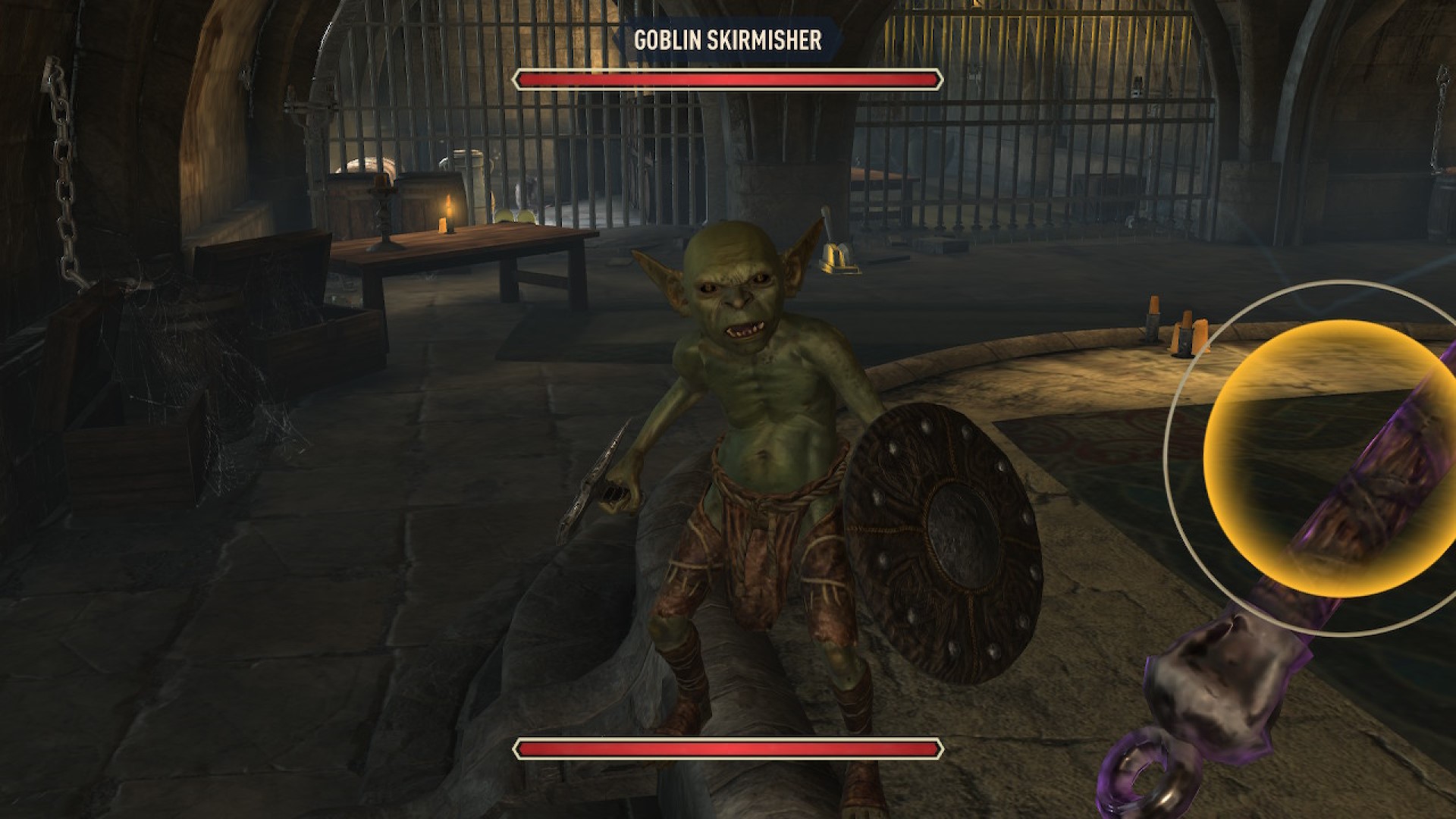 Every combat encounter involves locking into an enemy.

When out of combat, you explore generated levels to loot and complete. Explore is a bit of a stretch, though, as for the levels are very linear. These levels are trying to be more like the dungeons of Skyrim than Skyrim as a whole, but some of the levels are still a bit suffocating. Levels are filled with enemies, loot, and even a few secret areas that give just enough reason to look around. Just like how the combat is awkward, the movement and looking around is awkward both in and out of levels, though that doesn’t matter as much.

Outside of the combat and the dungeon crawling, you spend time rebuilding your town. The town building aspect of the game is neat, but it is also where the free-to-play side of the game begins to shine. Most of the structures you build will be homes to level up your town, but there are a few useful builds like a blacksmith that offer various services. You can also repair some things like the town’s castle walls and add decorations that makes the place look nice. The buildings and the blacksmith require money, and the buildings require time; but like other free-to-play games, the time and money ramp up exponentially.

There are people in the town who offer quests, jobs, and challenges, and level up any gear you have as well as yourself. When it comes to the jobs, they are pretty much all the same to me. I don’t know if there is a main quest line in the game because for me, a mission was a mission no matter its importance. As for the leveling, I found it to be slow, but there are some neat combat abilities to unlock like the ability to dodge an attack and hit right after. Talking to the townsfolk and picking up quests is neat, but the repetitiveness settles in shortly after starting the game. 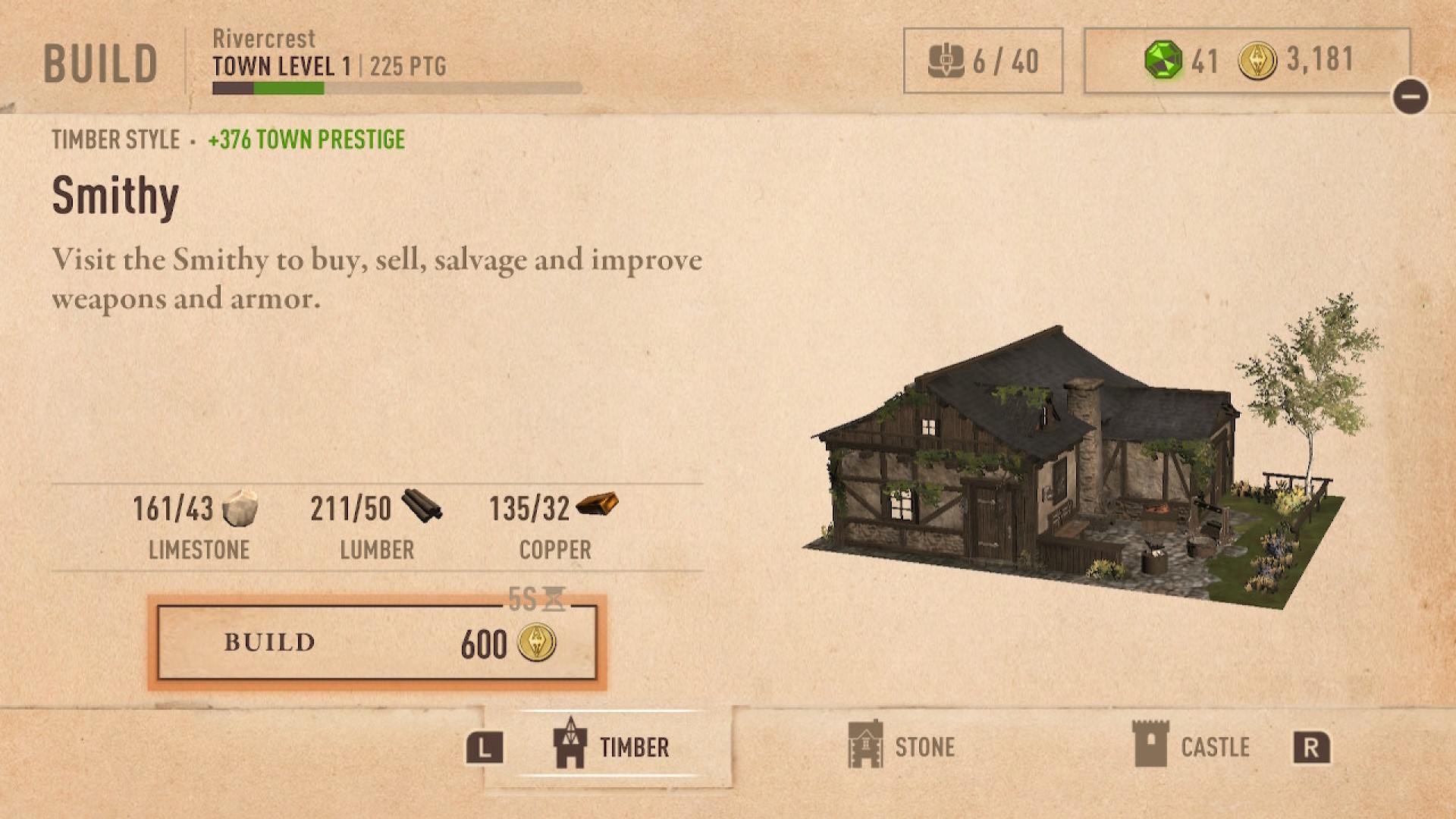 The level one upgrade is reasonable, but can the same be said for future upgrades?

Outside of the main game, there are two other side modes. The arena is a one-versus-one fighting arena where you fight real life opponents, and the abyss is an endless level. Both the abyss and the arena are pretty much exactly how you think they would be, but I think the arena really highlights the poor combat. Both me and opponents would just slash at each other until one would fall because it was easier and more effective than actually trying to use the game’s combat systems, and I would say the mode overall is a hard pass. The endless mode is just that: an endless mode. You go until you die, and that’s pretty much all there is to say.

In conclusion, The Elder Scrolls: Blades is not a good game. The best thing I could say about the game is that it reminds me of a fake video game in a movie, except the ones I have seen often look clunky and terrible overall. I really want to love the game for its mix of dungeon crawling and town building, but its clunky combat stops me from enjoying any of it. I’m fine with doing free-to-play grind if the game is worth it, and this game doesn’t even have terrible microtransactions, but I don’t think what is there is worth any of your time or money.

Penarium is a 2d platformer about a kid stuck in a circus act filled with traps trying to kill him.

I am a big fan of Super Crate Box, and this game is the closest thing I could find to that experience. In this game, you jump around on platforms picking up barrels while various traps try to kill. In other words, it’s Super Crate Box except the weapons are taken out of your hands and pointed at you. And in that sense, I found this game enjoyable. I don’t think it’s as addicting, but it’s still a lot of fun.

This game has three modes: a campaign of sorts, an endless arcade mode, and a multiplayer mode. Its “campaign” mode consists of thirty levels across three areas. While the name of the game is picking up barrels, this campaign has some variety to it that I wasn’t expecting. The modes found in the campaign include the main barrel pickup mode, a Simon Says mode, a mode where you pick up potions before they hit the ground and drop them off to the right cauldron, and others. Another area where there is variety both in and out of the campaign are the traps. They range from heat seeking missiles to a shuriken that travels around a platform to even a bird that steals a barrel and flies around with it. While you have no weapons of your own, you can double jump and screen wrap, which is a big help. The only issue I ran into in regards to the campaign is that some of the levels will dip in frame rate after some time spent in them, but the campaign overall is a lot of fun to play through. 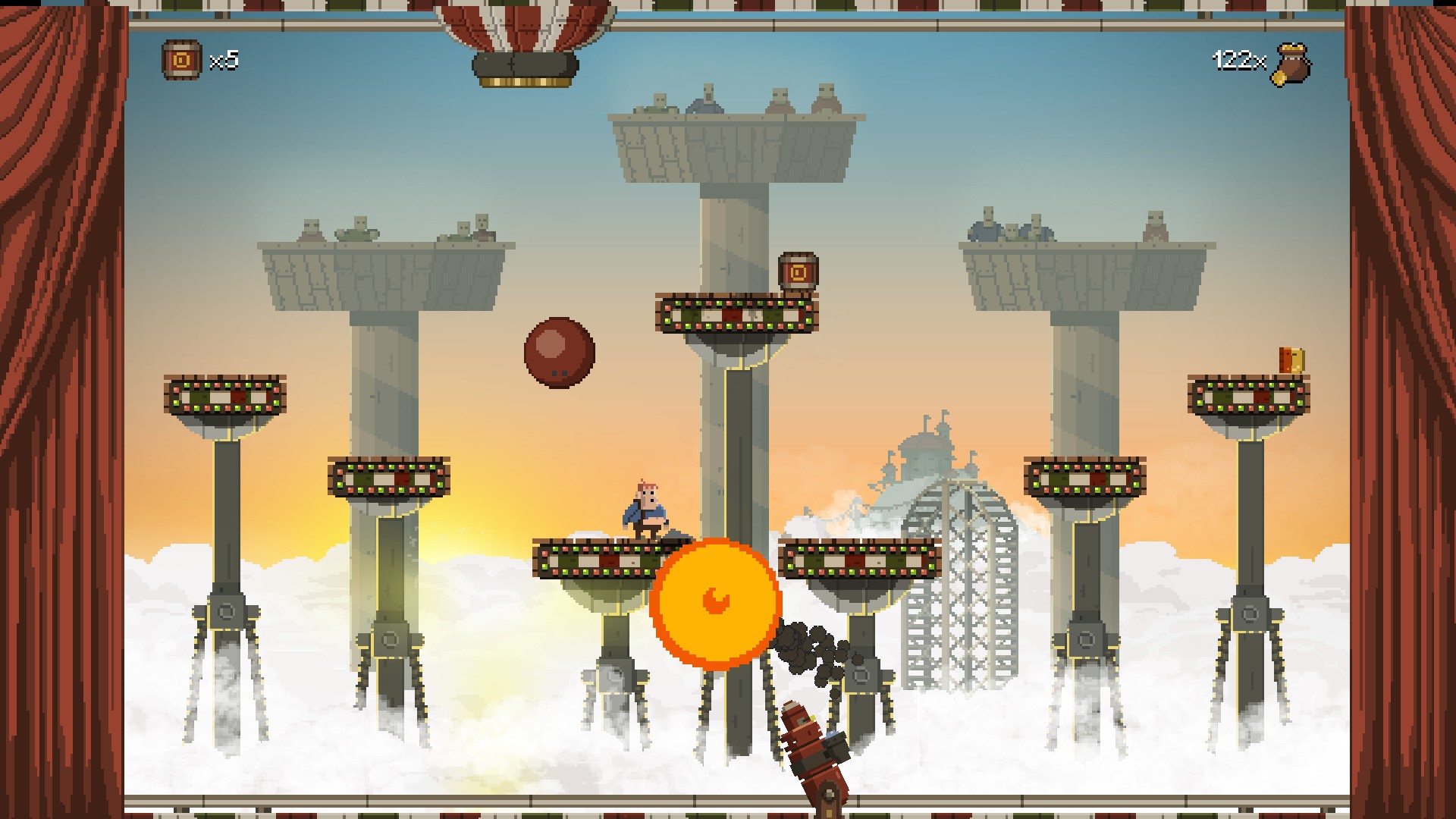 Penarium has a fun circus theme and music to match.

The other mode I played (because I didn’t have anyone to play multiplayer with) was the arcade mode, which is where the Super Crate Box comparison comes in. There are three arenas (for the three areas of the campaign), and the only mode is the barrel pickup mode. In this mode, you go for high score, and every five barrels picked up changes the traps. What makes this mode different from Super Crate Box, though, are the perks. In the arcade mode, you earn money, which can be spent on unlocking perks. These perks range from a money magnet to five barrels spawning in at once, and everything in between. The perks are a nice addition to the game, and it adds more replayability. Even without the perks, though, the arcade mode is fun to try and get a high score in.

In conclusion, Penarium is a fun arcade experience. Jumping around and trying to avoid the game’s various traps while picking up barrels is a lot of fun, and the campaign and perks offer more content and replayability. If you are a fan of Super Crate Box, or you are just looking for a new arcade experience, I would check this game out.

Snakeybus takes the classic Snake game formula and adds a bus driver twist. In this game, you pick up and drop off people at stops around a map, growing more and more as time goes on.

While the premise of a Snake game except with an overhead camera angle instead of a top-down angle sounds simple, Snakeybus adds some new layers of strategy and mechanics that makes it unique. In this game, you have to pick up and drop off passengers to grow instead of just eating a fruit, and game over happens when your bus stops, not when you hit yourself. Since this is a 3d game, you have verticality to your benefit (or detriment), and this game loves to play with that. Your bus can jump, and doing so will create an arch that will last the entirety of your bus length. This verticality adds a whole extra layer to strategy that feels refreshing for this type of game, and seeing my bus arch is pretty neat. In that sense, seeing the whole map covered in bus is pretty neat too, and this game allows you to float around the map and look at the bus you have made once you finish a level. 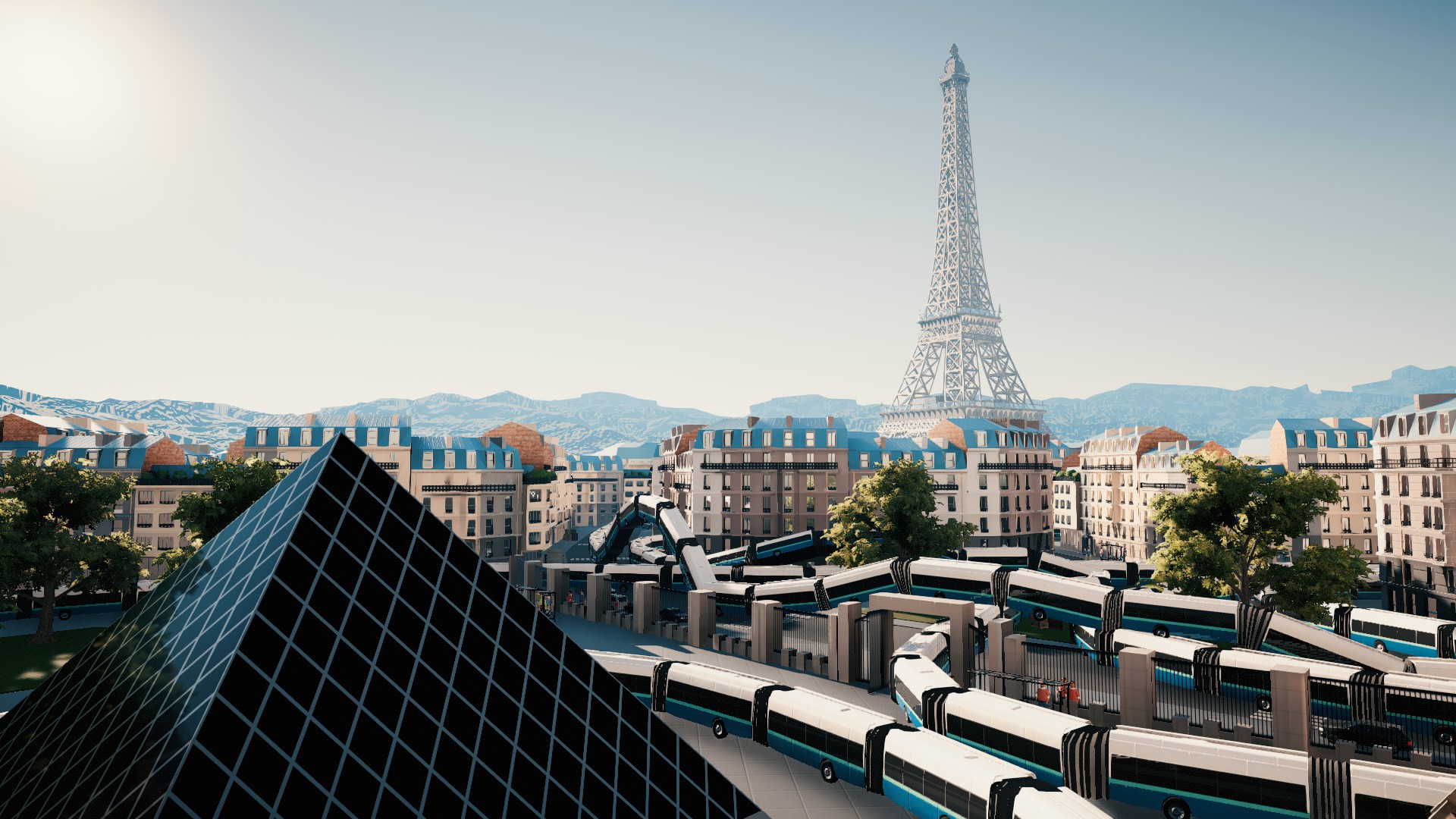 “If you look out your window, you will see a beautiful view of Paris (and more bus).”

Another key difference from Snake are the maps and modes. This isn’t a giant empty square, but true maps, and there are some pretty cool ones. They range from the normal, like a rainy Seattle or a sunny Paris, the strange, such as the human vessel from Interstellar or a bunch of winding paths around a giant orb. These maps are pretty cool, but what makes them cooler is the game’s lo-fi soundtrack, which actually fits really well with the gameplay. There are also a few modes to try and even a multiplayer option, but they all range from okay to bad and aren’t really worth talking about. The maps and modes add variety, but the biggest issue I had with the game was that it didn’t really draw me in. I found myself done with this game shortly after starting it because I didn’t find myself addicted to its premise like Penarium or Super Crate Box. I got what the game was trying to do, but then I just moved on from it, which is a shame because I think the game is pretty cool.

In conclusion, Snakeybus is a fun take on Snake worth checking out. If you can get behind the premise, then there is a fun and interesting game with cool maps and a solid soundtrack. As fun as it was, I didn’t find myself really getting into it, but that was just me. I would check this game out if you are looking for a unique take on a classic arcade experience.