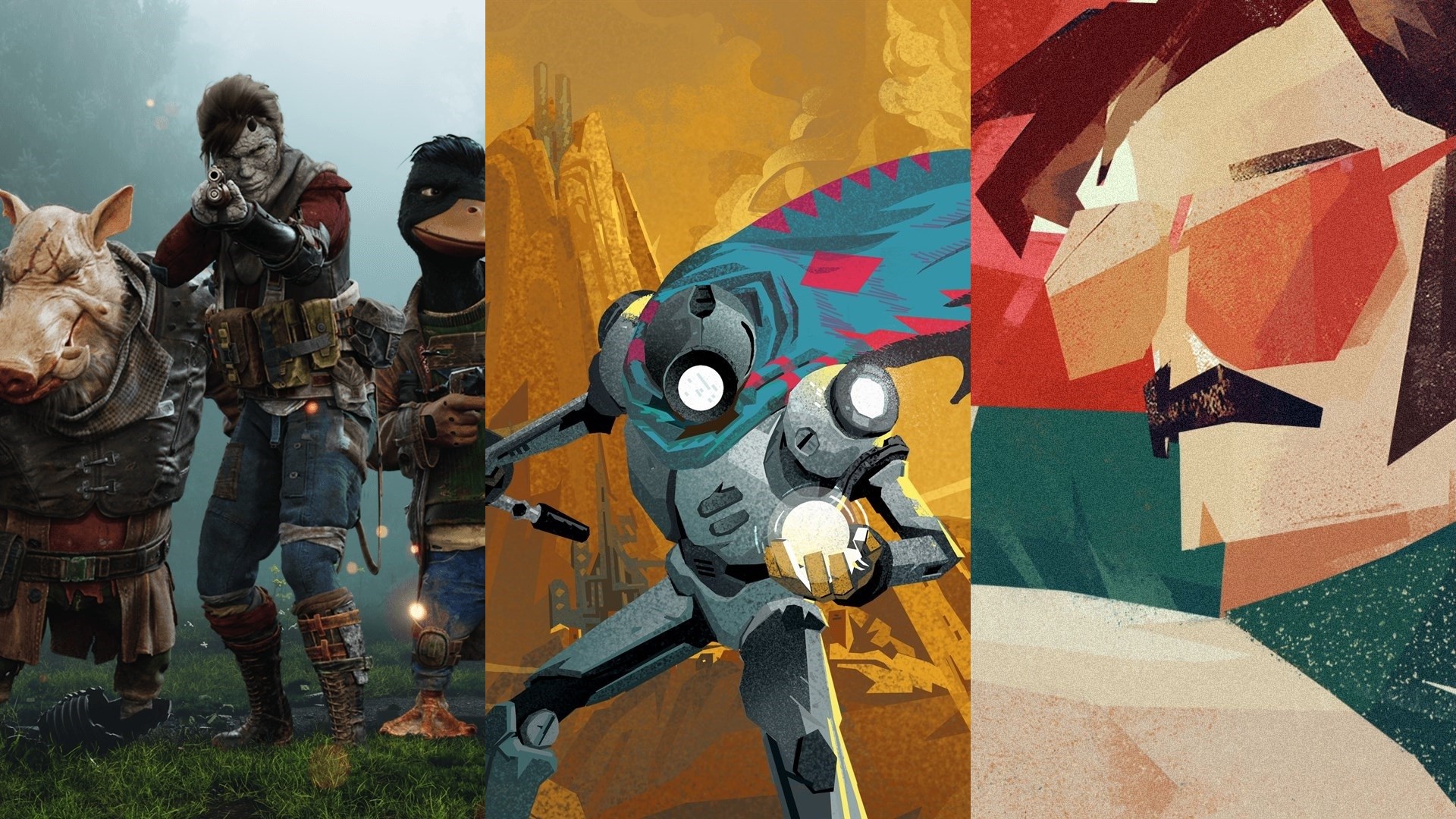 Mutant Year Zero: Road to Eden is a turn-based strategy set in a post-apocalyptic future about mutant creatures searching for a city known as Eden.

Those who have played the recent XCOM games or the countless other games with similar gameplay will be familiar with what this game is. In terms of its combat, I think it’s fine. I felt like the odds were against me when it came to shots that didn’t have 100% guaranteed hits, and some of the angles felt off, like only having a 25% hit chance despite being in a clear line of sight, but the combat works as intended. Also, one neat thing about the combat are the character mutations, which give my allies superpower-like abilities such as the ability to fly, ram into people, and more. What sets this game apart from others like it, though, is the ability to roam around and even play stealthily. Unlike other turn-based strategy games, this game only constricts you to grid-based movement when you are in combat. If you aren’t in combat, you can roam around freely. The ability to roam around is similar to Mario + Rabbids: Kingdom Battle, but this game has a much better flow between exploration and combat. On top of that, this game has the ability to stealth kill and even avoid certain situations. Guards have an alert radius around them, and they can be eliminated quietly if you have the right tools. Characters can also split up, and setting up an ambush feels natural for its genre. The combat in the game offers variety both within the norms of the genre as well as outside it. 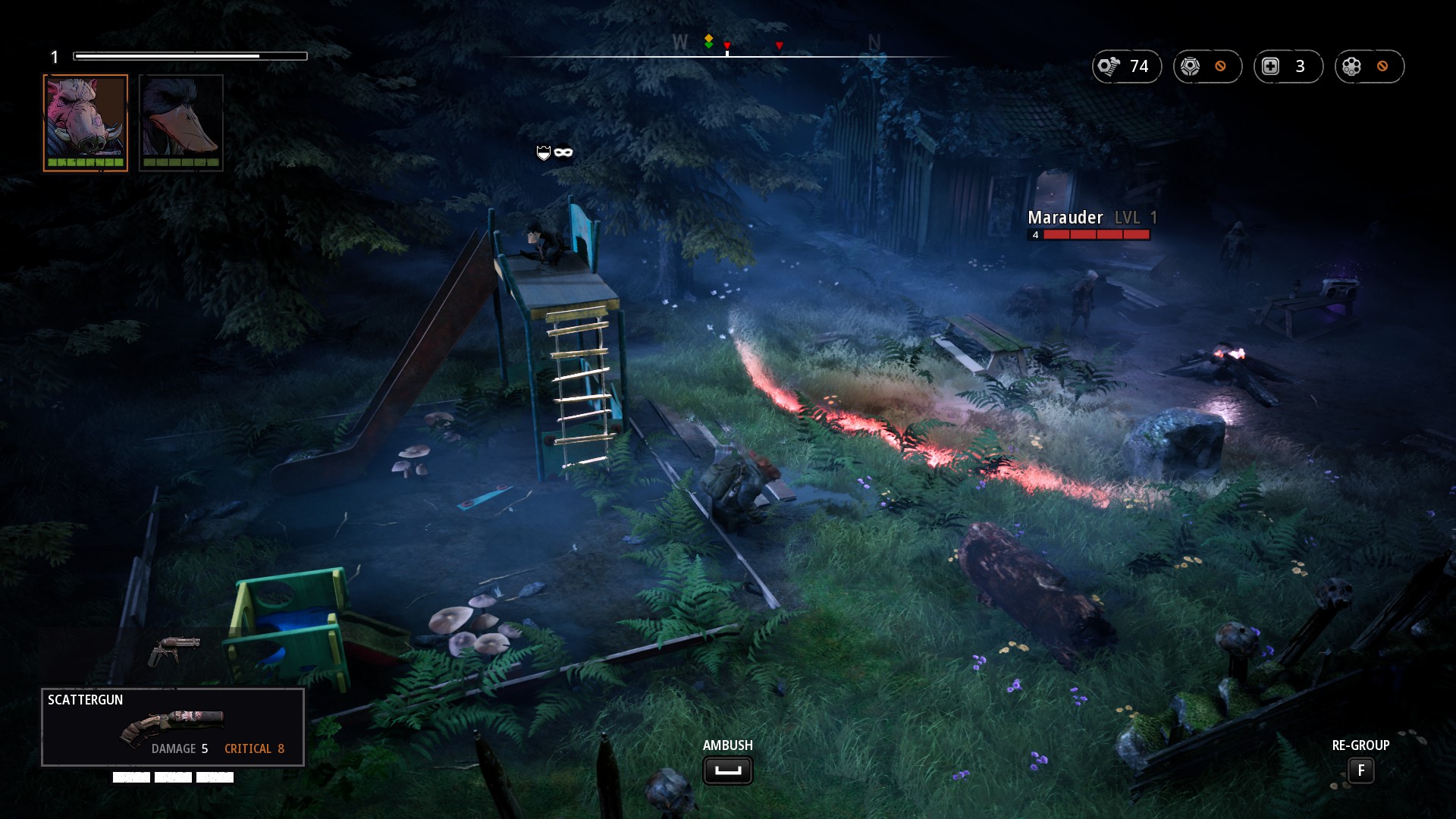 The ability to stealth kill and split up before starting combat should be in more XCOM-like games.

Outside of combat is exploration, which there is a lot of in this game. Mutant Year Zero consists of a bunch of open-ended levels strung together. Each area feels distinct from one another, and are fun to explore and loot. The biggest issue with levels, though, are the leveling. Each area contains enemies, and higher level areas have higher level enemies. While I don’t mind dealing with ally and enemy leveling, I found the balance in this game to be off, as for it didn’t take long for my characters to be under-powered. It’s nice that you can avoid enemy interactions if you are sneaky enough, but all that meant for me was running into even higher leveled enemies. Also, the game only has an overworld map, not a level map, which would’ve been helpful. One area worth noting in this game is your home base, which is where you can upgrade and buy new stuff. The hub world is fun to be around, but not being able to sell equipment or scrap weapons at the hub made my inventory clog up. Despite its flaws, the world in this game is still a lot of fun to explore and rummage through.

In conclusion, Mutant Year Zero: Road to Eden is a solid turn-based strategy game with some fresh ideas. Character mutations and the ability to stealth gives combat variety, while exploring the levels and looting them dry felt right in place with its setting. While there are a few flaws here-and-there, but I found the experience to be overall positive, and I would recommend this game to any fans of strategy games.

Creature in the Well

Creature in the Well is a top-down hack-n-slash game that fuses dungeon crawler with pinball. The game follows a robot venturing into an underground facility guarded by a mysterious creature in hopes of restoring power to a nearby town.

The main two things that got me hooked to this game going in was the pinball-inspired action and Hyper Light Drifter feel. In that sense, this game succeeds, but only at first glance. The pinball-inspired combat is fun and creative, though with a few flaws. How each room in every level works is the room will launch pinballs around the area. If they get near you, you can either hit them or charge them up, which gives them more power and helps you aim them. You use these pinballs to power up bumpers, which gives you power as a currency to open doors. The combat in this game works well to feed into that pinball style, and there are even multiple weapon types that have different abilities. There are a few things, however, that I am not a fan of. The combat, while fun, isn’t as exciting as I thought it would be, mainly due to how much health is given. Personally, I think having three hearts instead of a gradual health bar would’ve been more exciting. On top of that, red pinballs (which are the bad ones) can’t be dodged through, and they stop movement, which I found annoying. Still, combat in this game is fun. 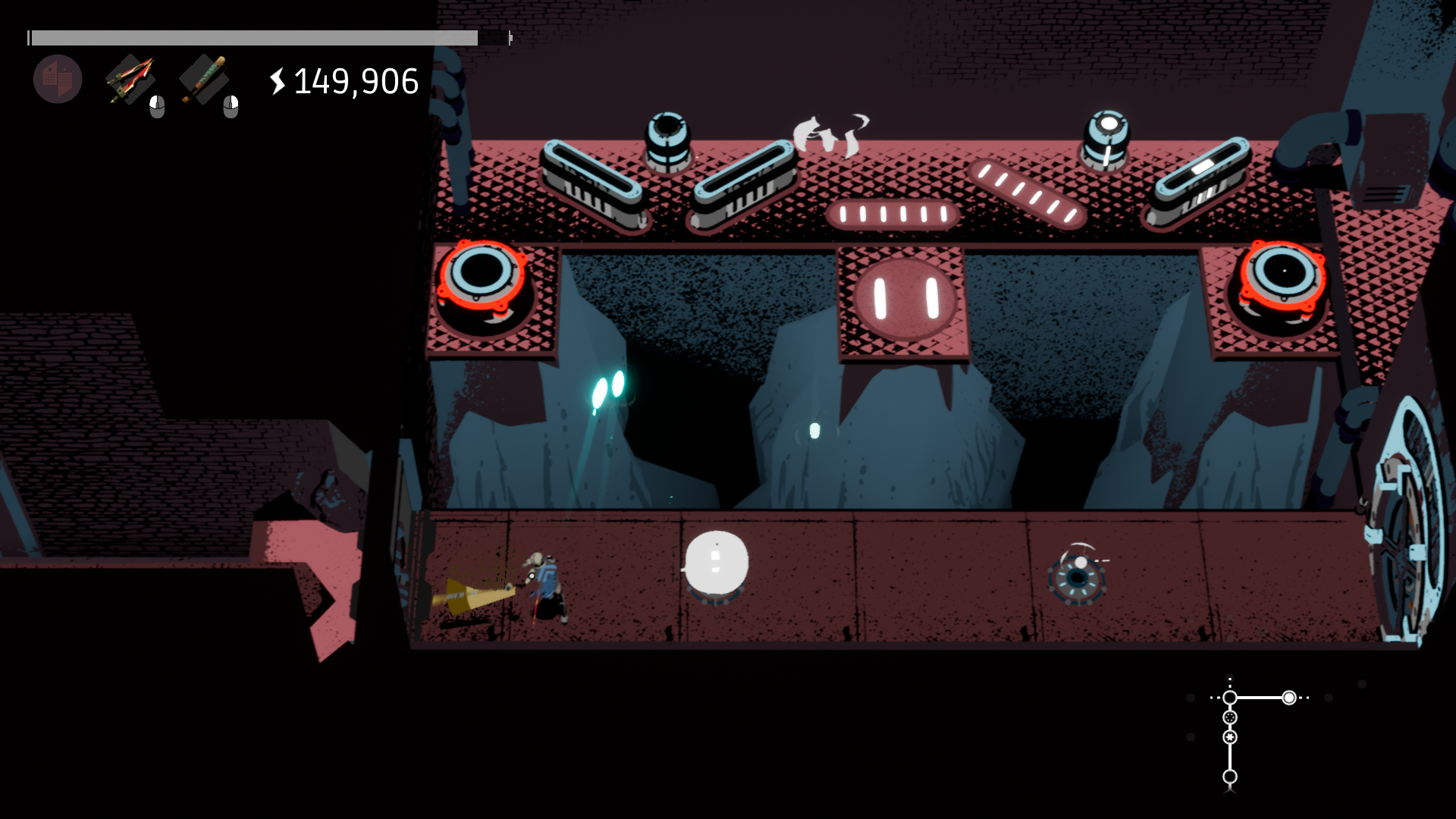 The game gives out enough power to be able to skip rooms if needed.

As for the style, this game has some, but only on the surface. The art style is pleasing to the eye, and dungeons having different color palettes gives the game a varied feel. While it’s cool to see, it also doesn’t last. The eight dungeons in this game have different colors, but all of them use the same few rooms, which I find interesting considering the game’s description says the dungeons are “hand-crafted.” Also, the town that you can explore outside of the dungeon feels like wasted potential, as for it is empty with the exception of a single shop-keep to upgrade your stats. Even the main villain seems interesting at first, but ends up being confusing because it has no reason to keep you alive, yet it is the one who brings you back to the surface if you die. The game has a great style at first, but once you settle into the game, it’s not hard to see the flaws.

In conclusion, Creature in the Well is a short, fun action experience that introduces pinball elements to its combat, but doesn’t do much else. It’s worth a look if you can access the game for free, but I would recommend Hyper Light Drifter over this game otherwise.

Serial Cleaner is a top-down stealth game about a guy who cleans up bodies after serial murders. As the game goes on, who his primary client is and how it affects his life are revealed.

Unlike other games, Serial Cleaner is about being there after the deed is done. It’s a neat concept, but it only goes so far in practice. The majority of the game involves being dropped in a level, completing tasks like body disposal or evidence pickup, and leaving. In between levels, you have a brief second at your house to interact with a few objects. While this game is short, I still found the gameplay to be surface level and repetitive by its end. There are a few neat mechanics, like being able to lock people into areas with the help of movable objects and the objectives moving around every time you restart a level, but there is nothing that is really compelling in this game. On top of that, there are a few flaws to the gameplay. Cops instantly react if you hit their vision cone, but you can easily run away from most of them. Also, you can hide right in front of a cop in a hiding spot, and they won’t find you. Finally, while I think the movement is overall fine, it does show a little stiffness when it comes to cleaning blood. While the gameplay isn’t fundamentally broken and is pretty fun, I can’t say it is anything memorable or worthwhile. 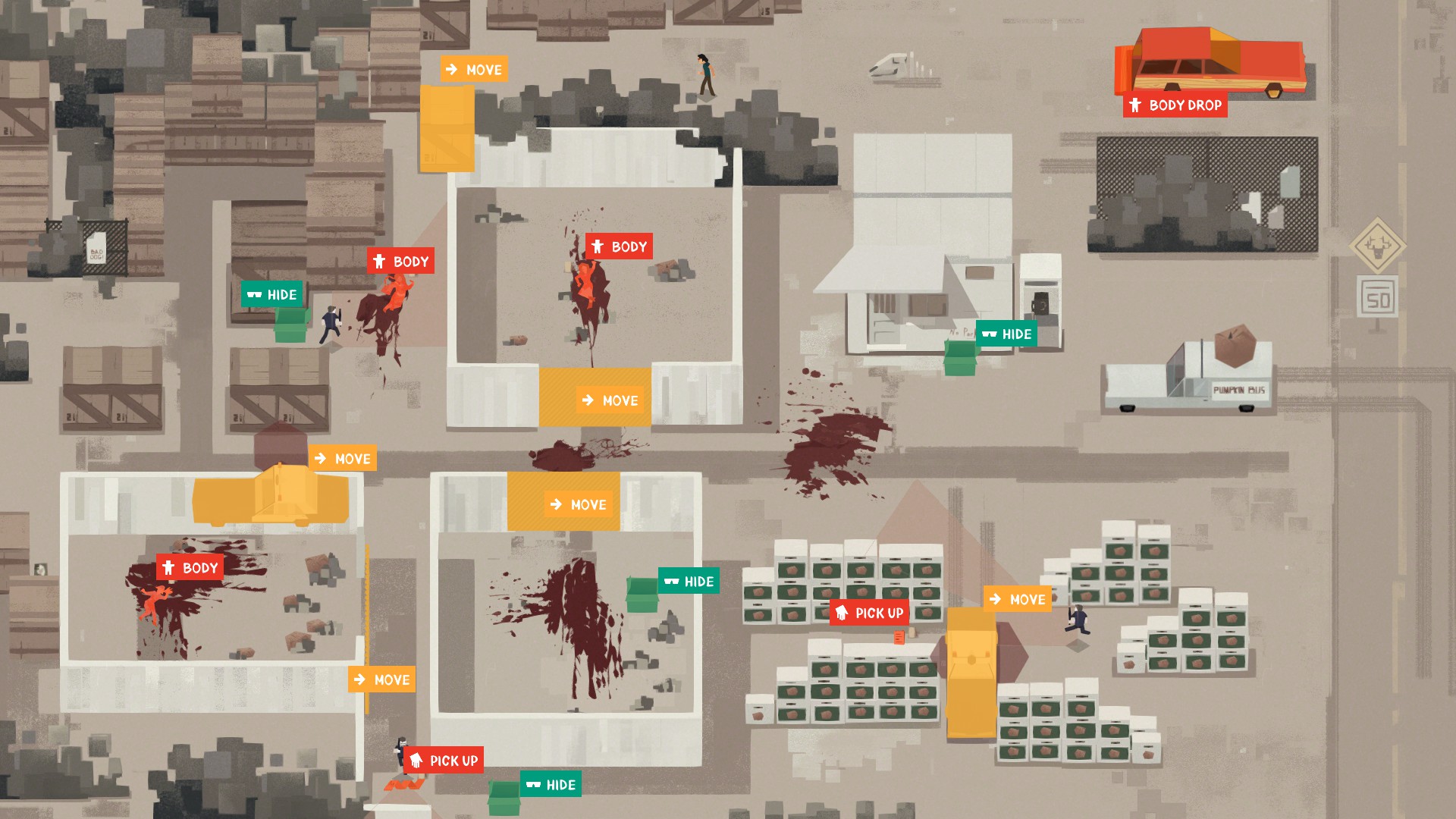 If you’re fast enough, you can lock cops into areas.

This game is at its best with the style. The game takes place in the 1970s, and it shows with its funk music and minimalist art style. Each level is also aesthetically unique, with different locations and even cool fonts for each level based on the location. At the house, there are some neat little interactions that adds more background to the game as well as follows the serial killers you work for through the news. What I love the most, though, are the movie references. In the game, there are hidden costumes and levels that reference various films like A Clockwork Orange and Taxi Driver, which I think is really cool. The gameplay needed more work, but the style is great for a game like this.

In conclusion, Serial Cleaner is a decent few hours to kill (and clean). While there is nothing inherently wrong with the game, it doesn’t do anything great either, and its style can only go so far. I wouldn’t say it’s a bad game though, and I would recommend trying it out if you already have the game in your library.