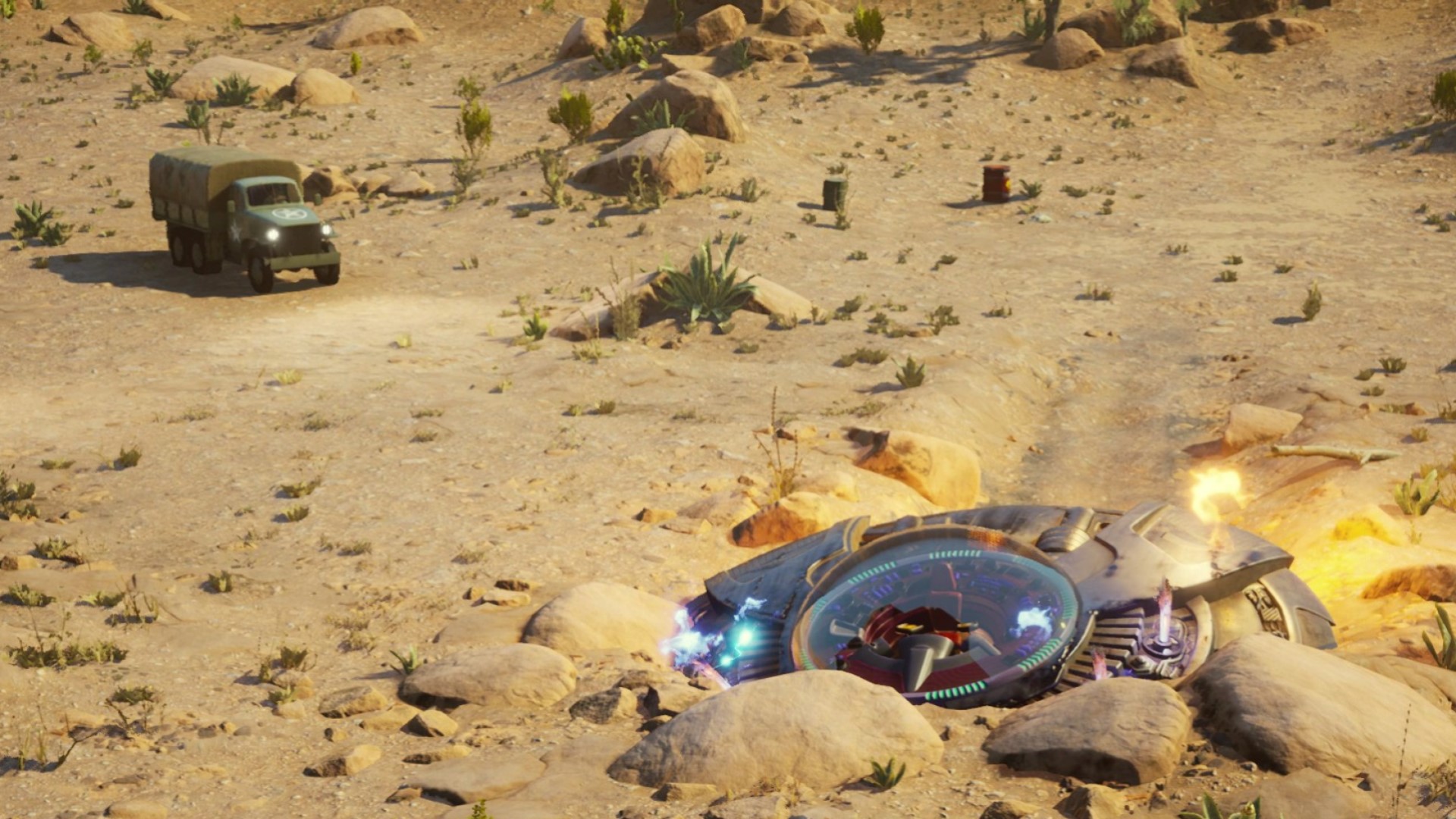 Note: Review code provided by Terminals.io and by the developers/publishers. Also, I have no experience with the Destroy All Humans! franchise, so this review is best suited for those who are new to it as well.

Are there life forms out in space? Maybe, but the question we should be asking is whether or not we want those life forms coming to Earth. There may be aliens out there whose intentions are noble, as they travel the galaxy in search of a new home among us humans or want to share technological advancements for the betterment of mankind. The Furon Empire, however, does not belong in that category. Sometimes, it’s good to be bad, and the remake of Destroy All Humans! sure makes a fun time out of it.

The Furons are a race of aliens who have no choice but to clone themselves to stay alive as for their race lost the ability to procreate. The cloning is beginning to fail, however, so they set off to Earth, as for Furons mated with humans a long time ago and the Furons believe they still have a small amount of pure Furon DNA left in them. You play as Crypto 137, a warrior clone who is sent to 1950s America to rescue another clone from the humans as well as harvest human DNA. But the Furons aren’t the only ones trying for world domination.

In terms of its story, there isn’t a lot to say about the plot. You go around to a few locations in the United States and take over the country with chaos and deception. Some of the stuff surrounding the story, though, is mixed for me. I think the best aspect of this game story-wise is the humor. It isn’t perfect, but I did get a few chuckles out of it, and it’s never in-your-face. Whether it be references to other media, everyone calling you names that doesn’t accurately identify you (including constantly calling you green despite being grey), or some cleverly written tool tips, the humor in this game is alright. Also, I really like the game’s 50s setting, and its music fits that 50s alien vibe well. What isn’t so great are the voicelines, which are actually from the original game. They aren’t bad, but you can hear their age, and some of the lines sound stiff. The original voice acting makes do, but I think voice acting in modern games has come a long way. Overall, the story elements of this game are fine, but don’t expect any gripping story. 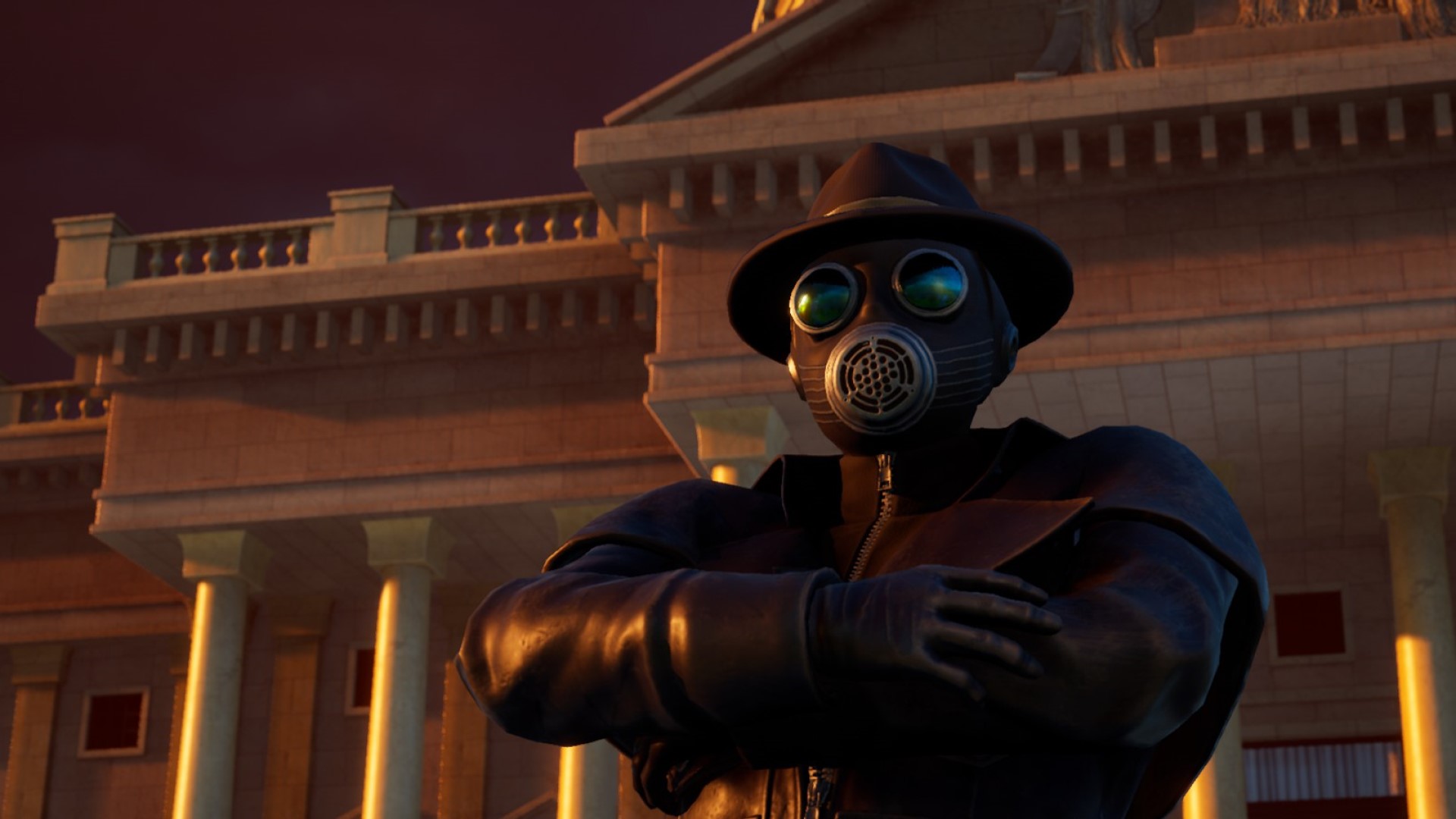 Silhouette is a shadowy character who is the leader of Majestic.

In Destroy All Humans!, you travel from mission to mission, completing objectives for your handler. One thing this game does well in terms of the missions is variety. One minute, you are hopping in your saucer wreaking havoc, and the next, you are disguising yourself as a soldier and infiltrating a military base. On top of that, each mission has its own set of optional objectives to complete, which also some variety to the gameplay. The campaign isn’t too long, but at least it never got old with me.

With these objectives, there are essentially two states you are in: action or stealth. In terms of the stealth, it’s fine, but it is lacking. In this game, you can disguise yourself as a human, which won’t get you spotted. The costume drains, though, and the way to fill it back up is to read people’s minds. At first, reading people’s minds was cool because it was fun to see the different thoughts people had, but those thoughts eventually repeat, and mind reading became a thing to do by the end. There are a few other mechanics around stealth like a forget ability that makes your target, well, forget, and some enemies and objects in the world that drain your disguise faster than normal, but getting in a disguise and keeping it from fading away is the main mechanic surrounding stealth. It makes do, but it’s easy and basic so long as you keep reading minds, and I was hoping for a little more there. Also, you can’t manually drain a disguise, which was an annoyance for me whenever I wanted to get out of one. It isn’t bad, but I wish there was a little more challenge there.

The main gameplay dish, though, is creating chaos in the streets, and that is where this game is at its most fun. Whether it be on foot or in a saucer, the weapons and abilities are a lot of fun to use. On foot, Crypto has four weapons as well as the ability to make objects and people levitate, and combining the two while fighting off hordes of soldiers is a lot of fun. The combat evolves a bit as you start picking up more upgrades and dealing with tougher enemies. Enemies throw grenades and shoot rockets at you, but you can throw them back at soldiers. Majestic soldiers, which are this game’s version of the Men in Black, have items that disable weapons, so it’s up to you to figure out how to deal with them. For me, early on or in the end, the best weapon by far is the Anal Probe, as for it has a neat timing mechanic to its shots, and streamlines the process of getting DNA from humans.

To get around the map, Crypto has a hover-like ability that is similar to riding a skateboard as well as a jetpack, and both are fun ways to get around. The ultimate way to get around, though, is your saucer, though I found it to be a bit wonky. In this game, your saucer is pointed diagonally downwards, and controlling elevation is done by either moving up and down the mouse or moving up and down the right stick. The controls are a bit weird, and the angle makes it a bit more difficult to see your surroundings, but none of it stops the ship from being fun to use. The saucer also has its share of weapons and levitation ability, though it doesn’t have as many tools and abilities as on-foot gameplay. In the saucer, you can destroy buildings, and wreaking havoc on multiple buildings at once using the Quantum Deconstructor is quite a sight to see. You can also deflect missiles, which especially comes in handy considering your shields don’t replenish like they do on foot. The saucer isn’t as fun as on-foot, but it certainly gets the job done. 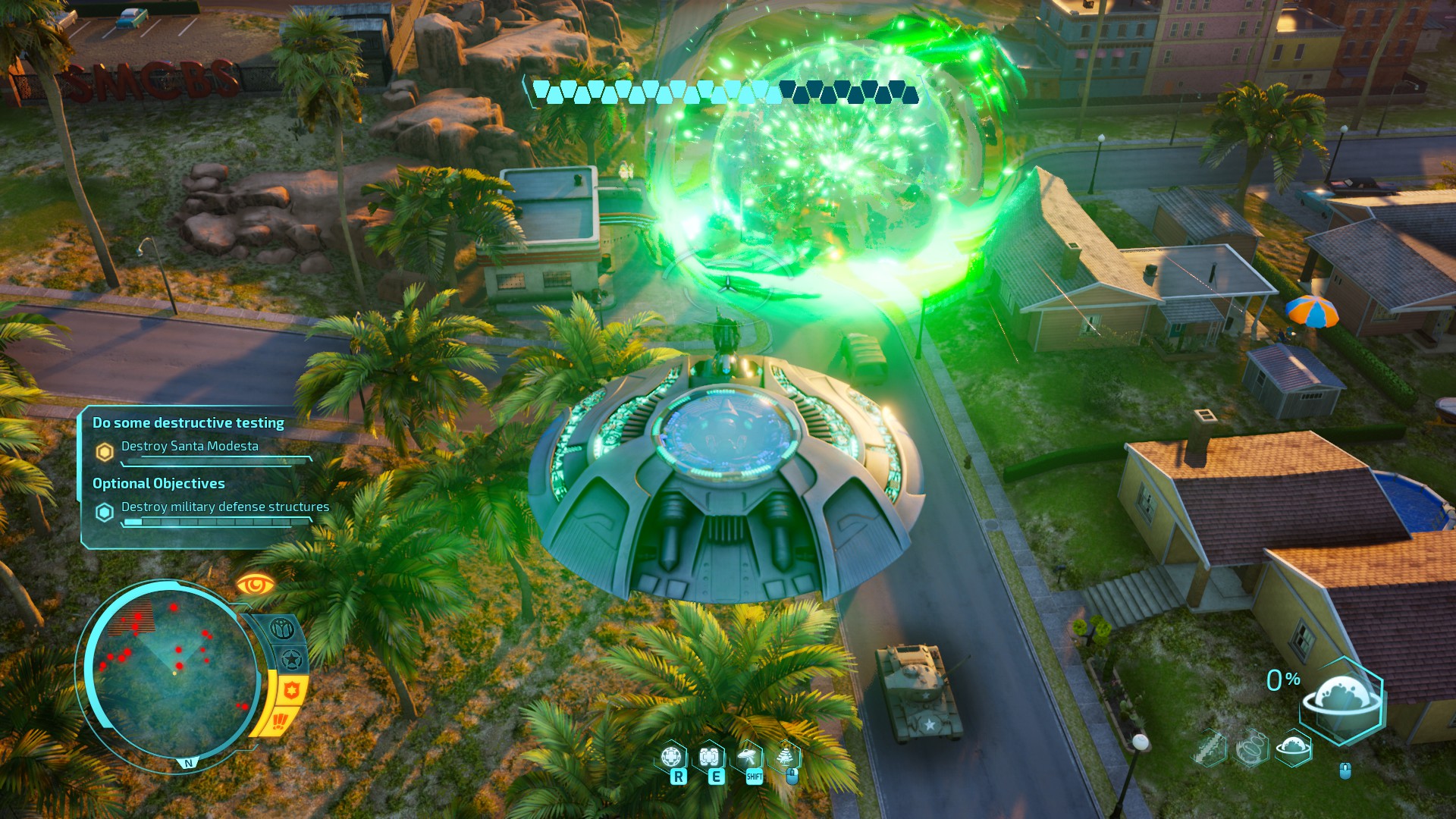 The Quantum Deconstructor creates a stunning green explosion that decimates anything near it.

While all of it is fun, it leads to an issue I talked about earlier: the game is a bit too easy. Any challenge comes from either the main objective or the optional mission objectives, but even they only offer a minimal level of challenge. When it comes to actually fighting against others, you have to practically stand there and soak bullets to have any chance of dying. The only times I really died in this game from combat was either from the final boss or from not paying attention. There is no difficulty options, so this is what you are stuck with. I get that this game is a bit of a power fantasy, and if you are into that then I think you will really like this game, but I personally only find that lack of challenge entertaining for so long.

The main missions aren’t the only thing you can do in this game. All of the missions take place in six locations, and all six of these locations can be explored after visiting them once. These maps are diverse, ranging from a military base in Nevada to this game’s take on D.C., and they are all fun to explore. More than just an open area, though, these locations all have a bunch of probes to pick up as well as four challenges to complete. The four challenges are a racing challenge where you chase down a probe, a destruction challenge where you try to destroy as much as you can, an abduction challenge where you throw certain objects into a tractor beam, and a rampage challenge where you go on a killing spree. These four challenges are in all six maps, all have a three star rating to achieve, and all are on time limits. I really like the idea of being able to explore the levels you played in the campaign, and I found the probe collection and challenges entertaining. There are a few small issues, like not being able to know where the edges of the map are until the game yells at you (which doesn’t help with judging the size of the map in relation to probe-finding), not being able to land the ship wherever you want, and not being able to see probes from the ship (at least as far as I know), but the exploration of these areas overall is fun.

Even with the exploration and the missions combined, this game isn’t that long. It took me around 18 hours to 100% complete this game (all missions with all optional objectives done, all probes and all challenges three-starred in all six areas, and all character and saucer upgrades purchased), but I spent a lot of time looking for probes, and I would actually guess the length of this game is around 13-15 hours to complete if you use a guide. I don’t think a shorter game is a bad thing, though, and I think the game’s $30 USD price tag is certainly reasonable for what is here.

I couldn’t end this without going over what I think is the best part of this game: the look. This is one of the prettiest remakes yet, as for it finds a perfect balance between modern and cartoon in a way that looks amazing. Seeing the sunset on the beach town of Santa Modesta or the swampy night of Rockwell is simply stunning, and there was hardly a moment I didn’t enjoy seeing. Plus, its cartoon look fits with the 50s alien theme well. People getting electrocuted go back and forth between their normal look and a skeleton look, and using the blaster melts the skin off of enemies and leaves a skeleton for a brief moment reminds me of a cheesy cartoon. This game looks great all around, and I am glad this game took the direction of cartoonish. 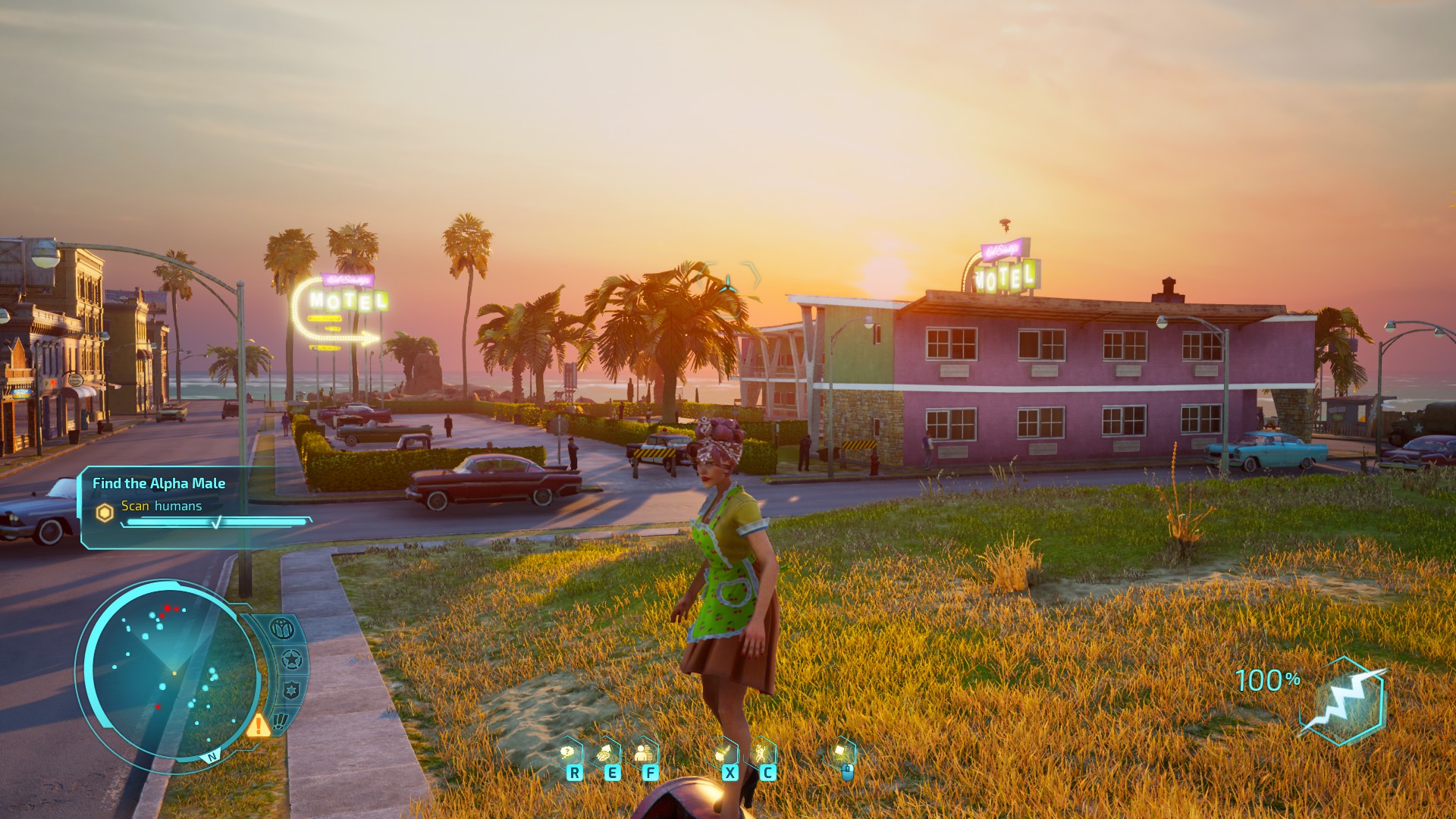 A lovely sunset at Santa Modesta.

In conclusion, Destroy All Humans! is a solid game with fun gameplay and gorgeous visuals. I think the game is on the easier side, but whether or not you think that is to the game’s detriment is up to you. I think what is offered here is worth the price, and I recommend this game to anyone looking for a short but sweet power fantasy type experience.