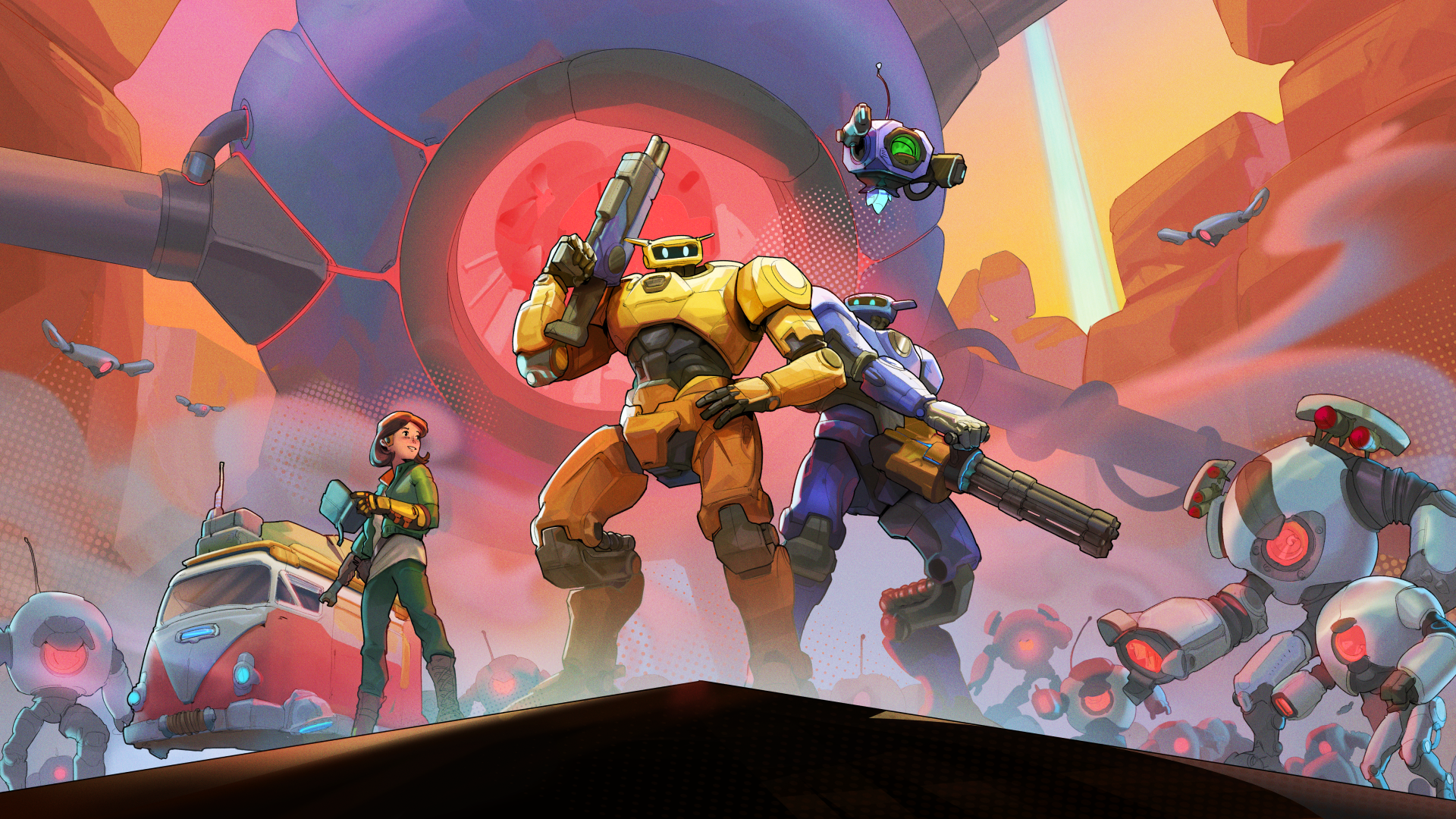 There are a lot of rogue-likes and rogue-lites releasing every year, so trying to keep up with them can be tough. In this sea of games, however, are a few games worth investing time into. One of those games I found worth the investment is Gunfire Reborn, a first-person rogue-lite that released into early access earlier this year. While browsing the Steam store, I came across Roboquest, a game that reminded me a lot of Gunfire Reborn. So I requested a key, got a friend to buy the game, and dived into this game.

Roboquest released into early access on August 20, 2020, and it is a first-person rogue-lite with a comic book art style taking place in a dystopian future. You play as a robot whose job is to protect humanity. One day, you are reactivated by a human named Max who is exploring to survive. Unfortunately, the thing between you and exploration are hundreds of murderous robots programmed to destroy humans. So, you do what you do best: pick up a gun and start shooting. 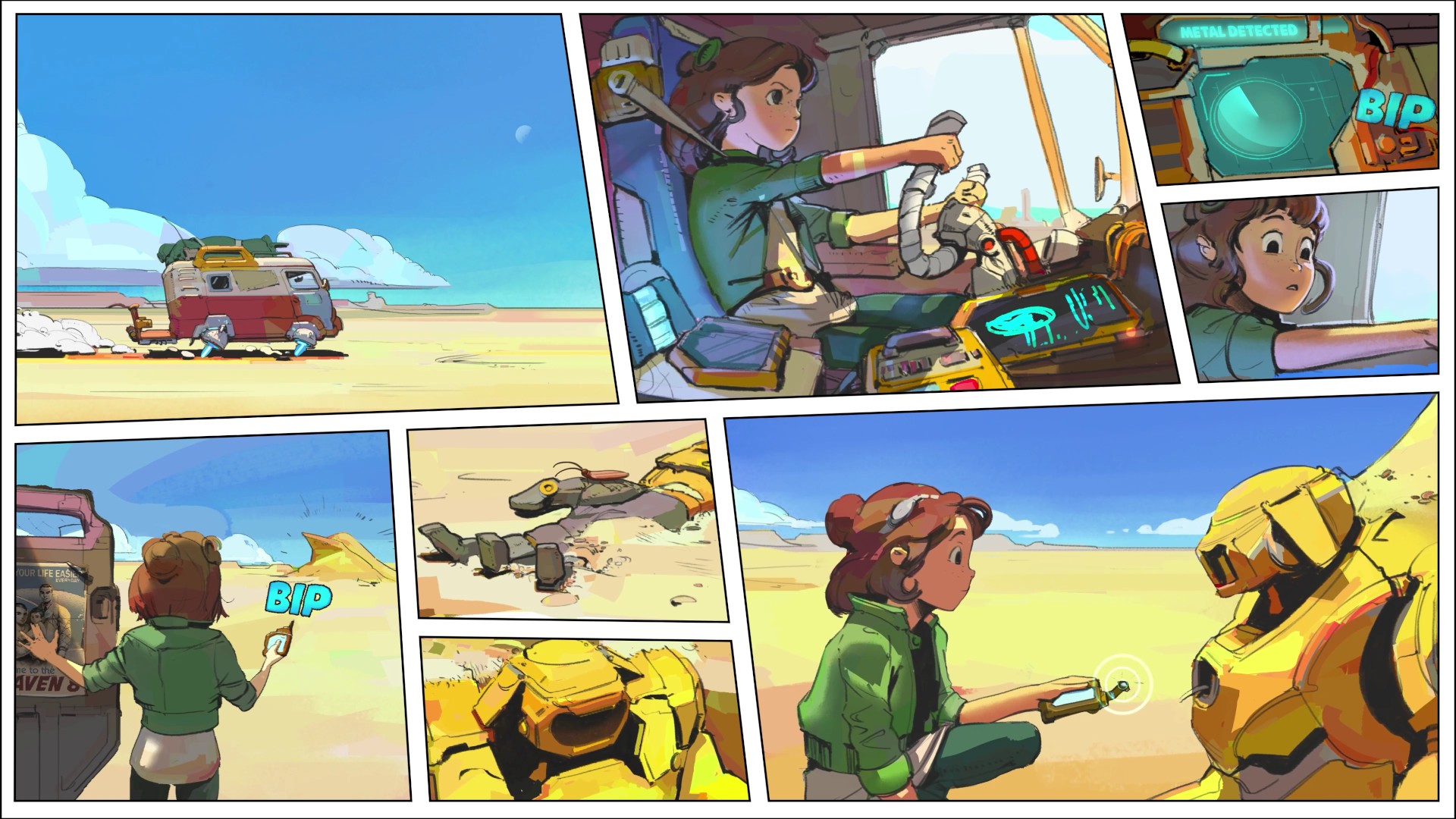 The story cutscenes are presented in a comic book fashion. The gameplay also has its fair share of comic book flair.

While there is a story there, it currently acts as a backdrop more than anything. What really matters here is the gameplay. Roboquest is one of the best feeling rogue-lites I have played to-date. It takes the formula of Gunfire Reborn and improves upon it in almost every way possible, leaving an incredibly tight and fast-paced experience.

The combat in Roboquest is where this game shines. It’s pace is not far off the reboot Doom games, which I think works well for this game, and the controls are tight. What also helps with this speed is the ability to double jump, slide, auto reload a weapon when it isn’t in use, and even grind on rails that are found around the map, and if anything else the head-bopping hard electronic music will make you want to keep pace. The difficulty scales based on the level and not the character, which means a smoother leveling experience and the ability to play co-op with people at different levels. One area where I think the game does a particularly good job at is with weapon leveling. In this game, weapons are assigned a color, and instead of picking up weapons based on their stats, you pick up items called cores that upgrade the color classification. For example, if I have an orange and a blue weapon, I would try to find and equip orange and blue cores, as it is the core that upgrades the damage output. I really like this style of leveling as it allows you to choose what weapon to use based on whether or not you like to use it instead of being forced to use weapons because they have a higher number than the one you are using. It also gives greater freedom to changing around weapons and cores late into a run instead of building a build at the start and being stuck with it to the end. 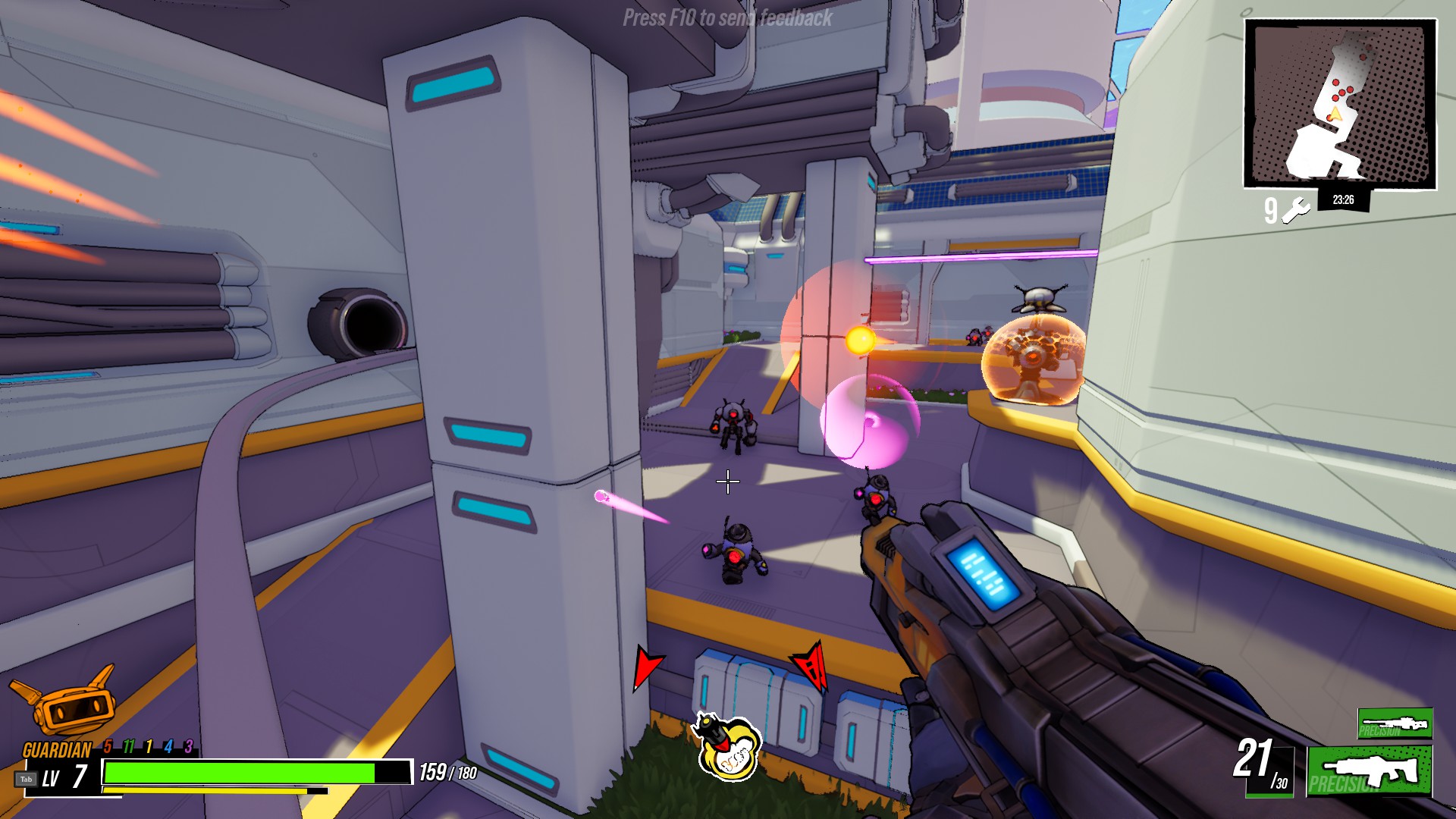 Grinding on the rails and shooting at enemies is a blast.

No good shooter is without weapons, and this is no exception. This game has a lot of weapons to try out, and I’ve had a lot of fun with a lot of them. Dual wielding shotguns, a crank shotgun, a bolt action sniper rifle, a mine launcher, a turret that you shoot in your hands as well as place, and much more can be found in this game. The abilities, on the other hand, are a bit lacking. As of now, there are three character classes, with each only changing an ultimate ability and melee type. The three abilities to choose from are either a missile to launch at enemies, temporarily turning invisible, or activating an attack drone. Not only could there be more characters, but I also think the characters could be fleshed out more.

Like many other rogue-lites releasing currently, this game has progression in between runs. As you play, you earn a currency that allows upgrades to a base camp. The upgrades are primarily about improving your options and starting loadout, including more core and weapon options at the start, the ability to save a weapon in a box between runs, more health out of health robots, and more. While I would like stat upgrades in the future, I understand not putting them in for the sake of being able to play with others at different levels. Speaking of which, co-op in this game has a few interesting choices. For starters, it’s only two players, which sucks but makes sense considering the size of arenas and amount of enemies. Weapons and cores are not shared between players, but xp and health drops are, and I hope to see shared loot in the near future. Finally, reviving a downed partner will reduce both player’s max health. They are interesting choices, but I don’t know if I necessarily agree with all of them yet.

While there is a lot to enjoy with this game, the biggest issue I have with it is an overall lack of content. Even for an early access game, this game is lacking. There are only four stages (with each stage only taking around ten minutes to complete), two bosses, a handful of base upgrades, and a small amount of map elements. While the combat can distract from some of this, it still feels like there isn’t enough. It only took me around two hours to beat the game, and not much longer to buy all of the base upgrades. Every time you beat the game, you unlock a new difficulty level, and I’ve had fun seeing how high that goes, but it isn’t enough. I know this game is in early access, and the developers seem committed to a solid roadmap of updates, but it’s something to keep in mind as of now. 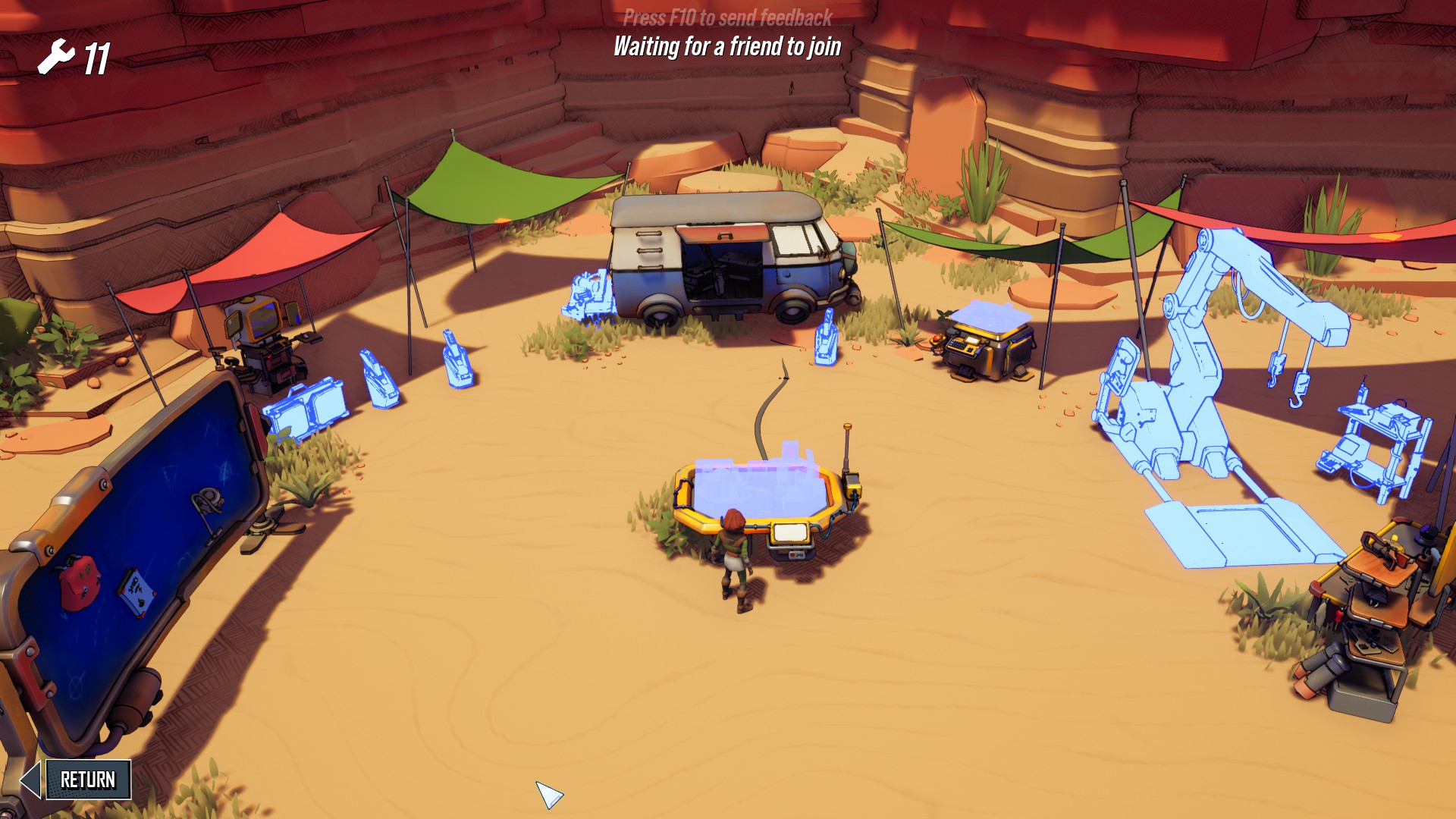 Base camp does not take long to fully upgrade.

In conclusion, Roboquest is a great rogue-lite shooter that needs a little more time in the oven. I love its fast-paced combat and the ways it handles weapons, but it’s not something you can get a lot of hours out of currently. I recommend this game to fans of fast-paced shooters or those looking for a spiritual successor to Risk of Rain 2 or Gunfire Reborn.