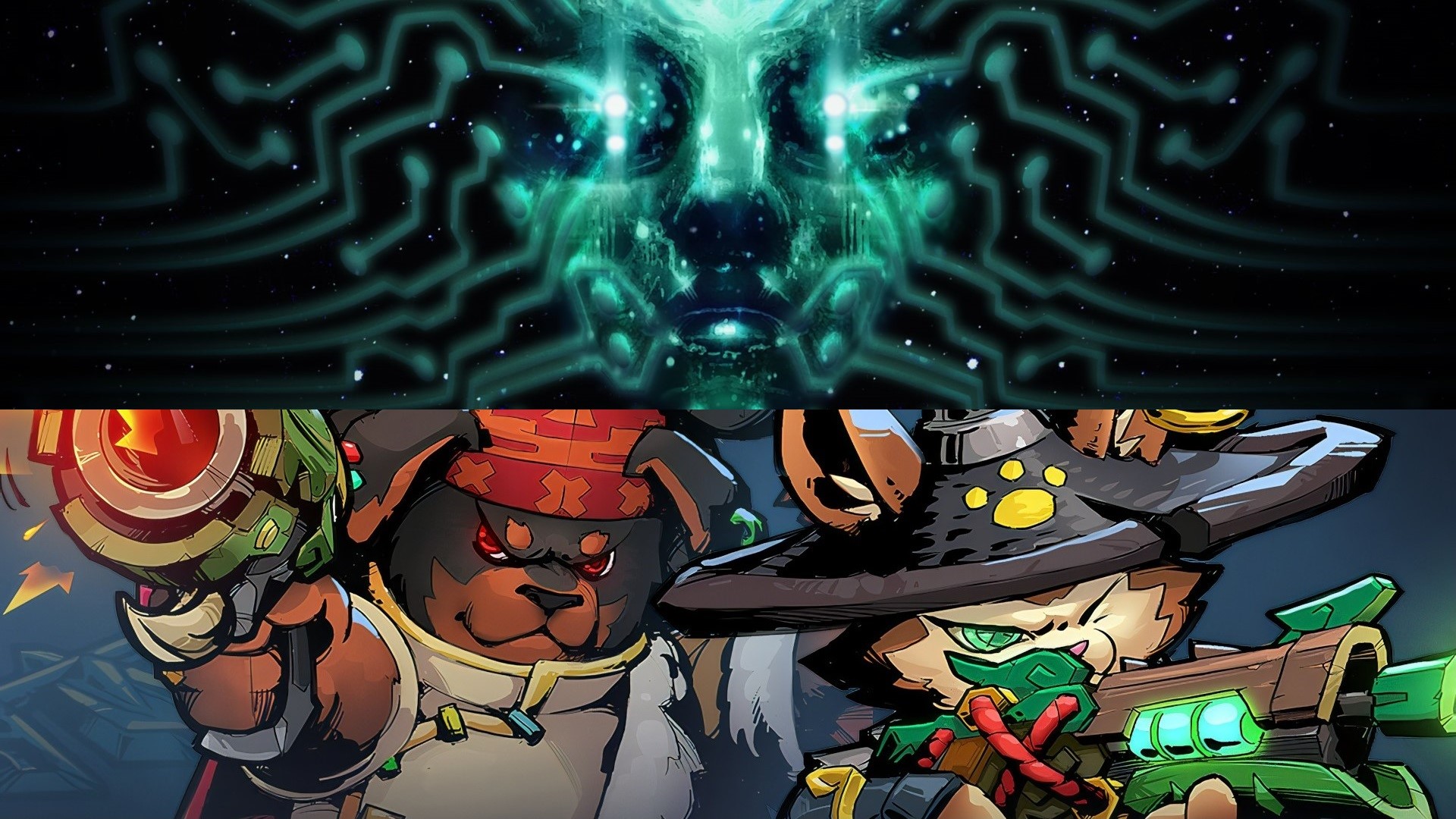 Gunfire Reborn is an FPS rogue-lite action co-op game released on May 2nd, 2020 into early access. The current price of the game is 12 USD, and the game plans on being in early access for 2-4 months according to its Steam page.

An indie rogue-lite in early access is as surprising as hearing the term ‘battle royale’ in 2018. Not only that, this one is only 12 dollars and is made by an unknown studio (at least in the United States). With that said, how is this game? A surprising hit. What makes Gunfire Reborn so special isn’t that it revolutionizes anything, but that it nails what it sets out to do and understands it scope.

In terms of its combat, Gunfire Reborn takes inspiration from games like Borderlands, Risk of Rain, and Overwatch. In each run, you pick up weapons, ascensions, and occult scrolls, which are all lost upon death. The weapons remind me of Overwatch both in look and feel, and I really enjoyed some of them like the throwing knives or an assault rifle that can spawn a floating orb that increases damage if shot through. Also, each of the two characters have an ability (an orb that freezes enemies for the cat, dual-wielding weapons for the dog) that remind me of Blizzard’s shooter. These weapons are similar to Borderlands as well, as for they drop from enemies and have various effects like elemental damage and modifiers. Inspirations or not, the shooting in this game is tight, and mixing it with abilities and a dash mechanic made for some fun non-stop action. 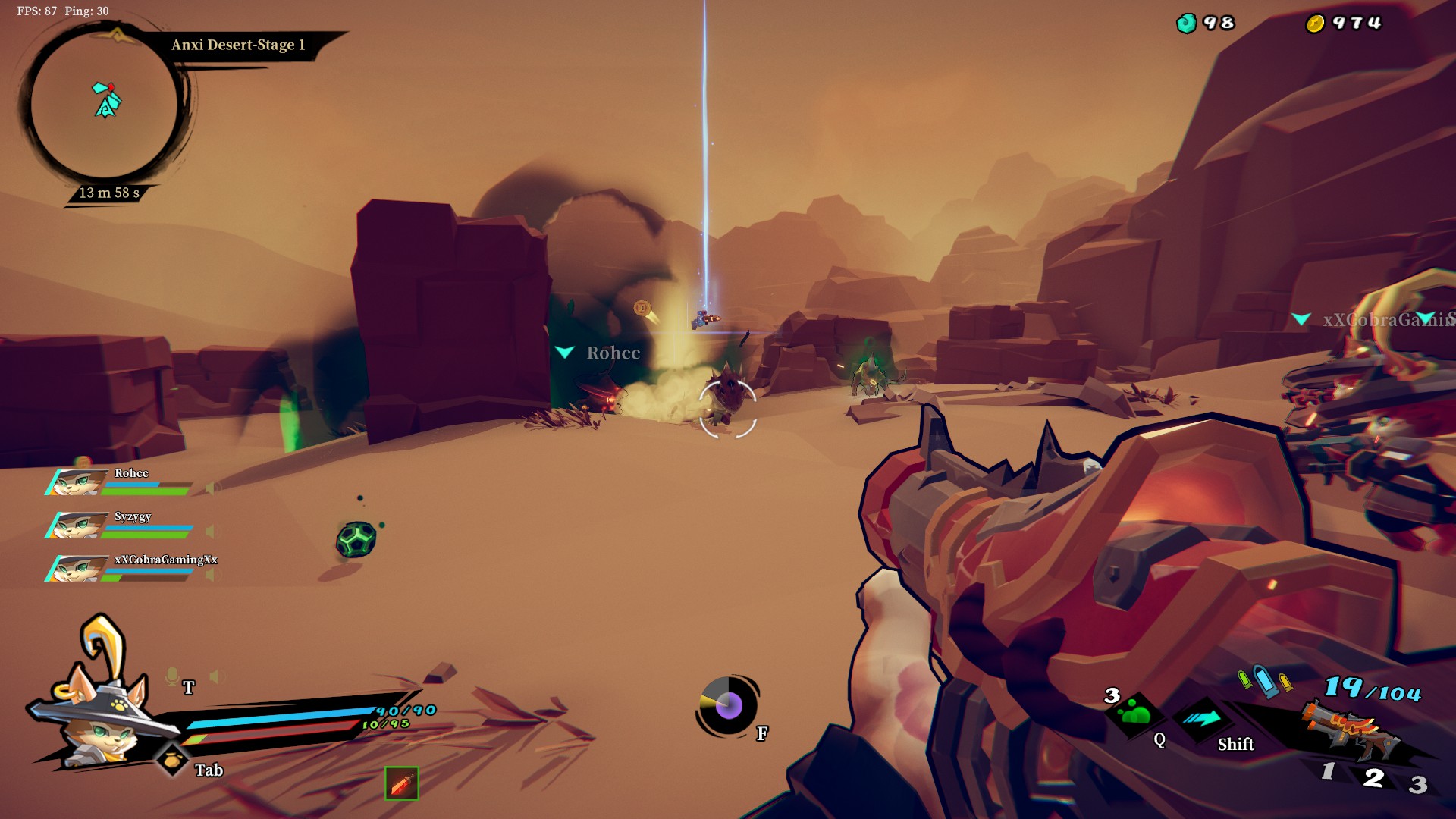 This weapon has the damage and firing speed of an assault rifle, but shoots multiple bullets at once like a shotgun.

The ascensions and occult scrolls are another set of items to pick up in the game that give upgrades (or maybe downgrades) to various aspects of the character. Ascensions only drop at the end of each level and upgrade a few aspects of the character, whereas occult scrolls can be obtained throughout and upgrade all parts of the character. This type of item is nothing new in a rogue-lite or rogue-like game, but some of the items remind me of the pickups in Risk of Rain. The similarities don’t end there, as for the game’s difficulty seems very similar as well. The enemies’ damage output and health scales as the game progresses, though in this game the difficulty scales with each level compared to Risk of Rain’s time meter. One issue I did have with the game in regards to difficulty was the scaling, as for this game gets brutal quick. There are only three chapters with roughly five levels in each, and each level is pretty short, but it’s a struggle to get through enemies because of how difficult they can be. Boss fights are fun, but they can kill in just a few hits if you are not careful, and the common enemies that spawn throughout a boss fight certainly don’t help. It’s even harder in co-op at times, as for enemies have even more health and allies that die can’t spawn until the end of a boss fight. None of it is frustrating, but I think there should be a better difficulty curve.

At the end of each run, you lose all of your items, but you have the option to spend a currency called soul essence on permanent upgrades. This currency is picked up like the normal currency in this game, and can also be spent on reviving yourself. Most of the permanent upgrades are pretty basic like higher critical shot chance, more health and armor, and so on, but I still think it’s nice having that progression. Speaking of progression, another form of progression involves trying to unlock all items, and most of these are tied behind challenges. They aren’t the deepest systems in the world, but they give enough reason to go back and grind the game out. 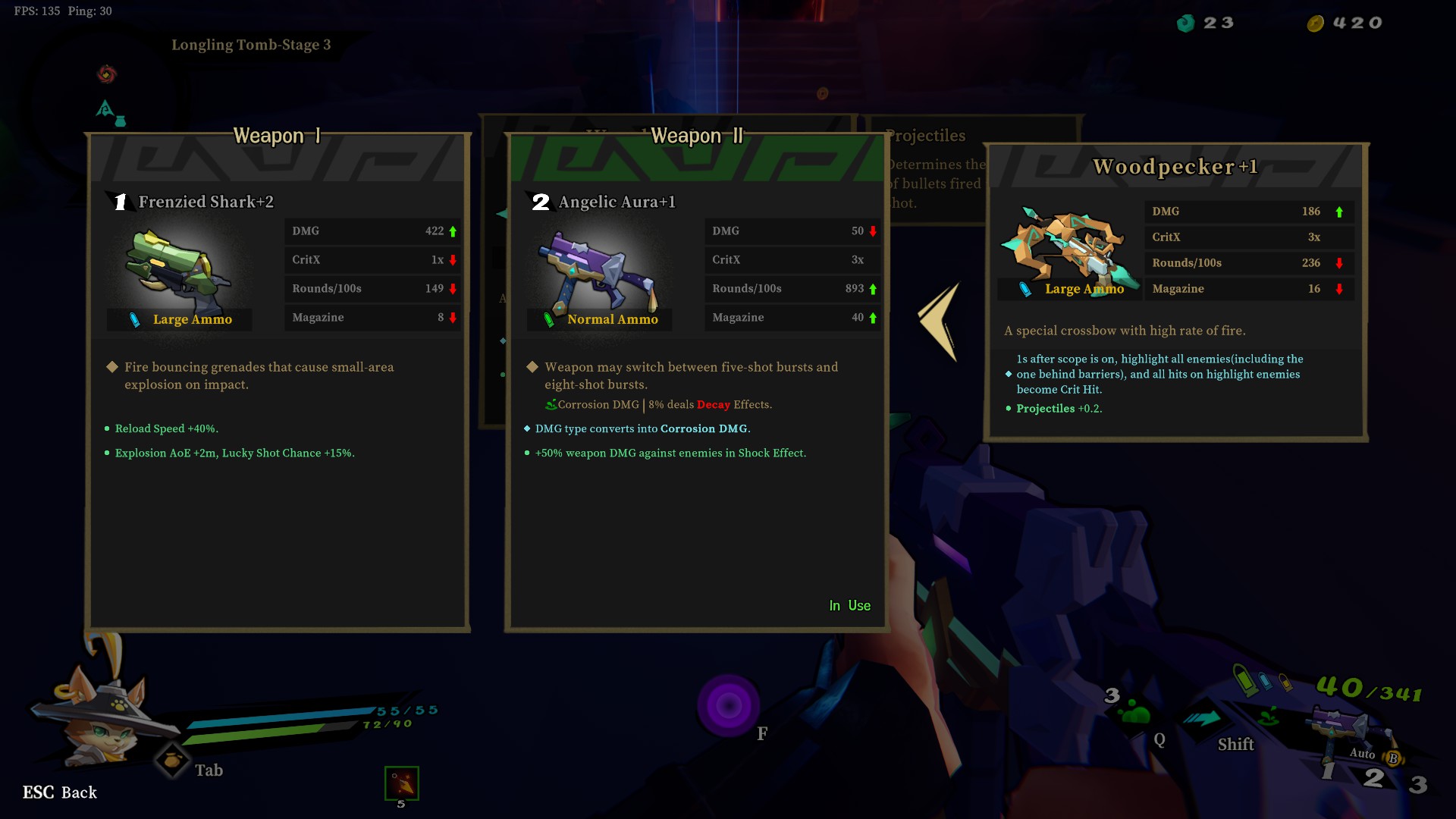 It’s a little weird to lose these weapons instead of keep them at first, but it makes sense with how the game is structured.

The biggest issue I had with the game was the overall lack of content. Rooms repeat pretty fast, the optional side areas in each level repeat even faster, the amount of weapons and weapon modifiers is short, there are only three chapters and two characters, and more. In terms of early access, however, I think this is the optimal issue to have, as for I believe games that need to ship in early access should be at the very least functional and mainly just missing content. I did run into a few technical issues like some broken English and some server lag in co-op, but there was nothing really game-breaking for me.

This game may get a few things wrong, but it also gets things right that I feel other games don’t quite nail. As far as I could tell, difficulty doesn’t scale based on character level, which means anyone from a vast array of character levels can play together. Weapon drops can only be seen by you, but weapons dropped by other players can be seen by everyone. Combat rooms, which lock the player in when entered, can still be entered by players late to the party. There are quite a few things in terms of co-op play and difficulty that games of higher budget and price get wrong that this game gets right, and I have to applaud them for it.

In conclusion, Gunfire Reborn is a surprising indie hit that I love. It still has some quirks to work on and some more content to add, but what is there is still a surprisingly fun time. On top of that, the game is incredibly affordable, making its barrier of entry low. Even in its current state, it is a game I would recommend checking out if you are a fan of shooters or rogue-lites.

System Shock is a cult classic game said to be the inspiration to Deus Ex, Bioshock, and others. NightDive Studios announced a remake of the game quite some time ago, but has had some turbulence throughout. Despite this, the game has a release date of 2020 and released a demo to try out. There is no specific date for release or price as of writing this. Also, while I am aware of the System Shock games, I have no experience with them, so I cannot tell you the similarities and differences between this game and the original.

The thing I found the most surprising with this demo was how long it was for me. I was expecting a 10-20 minute demo, but it took me roughly an hour to complete. I certainly don’t think an hour long demo is a bad thing, but one thing that didn’t help was the inability to save, which forced my time to be in one sitting. Playing a game for an hour isn’t crazy for me, but I still would’ve found saving nice.

One reason it took me some time to complete was due to the game’s level design and lack of a clear objective. Again, I don’t know what the original game is like, but I found myself lost in a maze and without a map. I found the game’s tight corridors to be refreshing, but I had very little sense of direction. What didn’t help was the game’s lack of a clear goal. When I played, I mainly tried to explore new areas, and while doing so I found keycards and whatnot that helped me open new areas. After a little while, I started smashing cameras and interacting with weird electrical pillar things, but once those ran out, I eventually had to look up where to go. I don’t know if any of what I did mattered of if I could’ve just walked to the exit, but I hope this game does a better job at explaining what these things do. 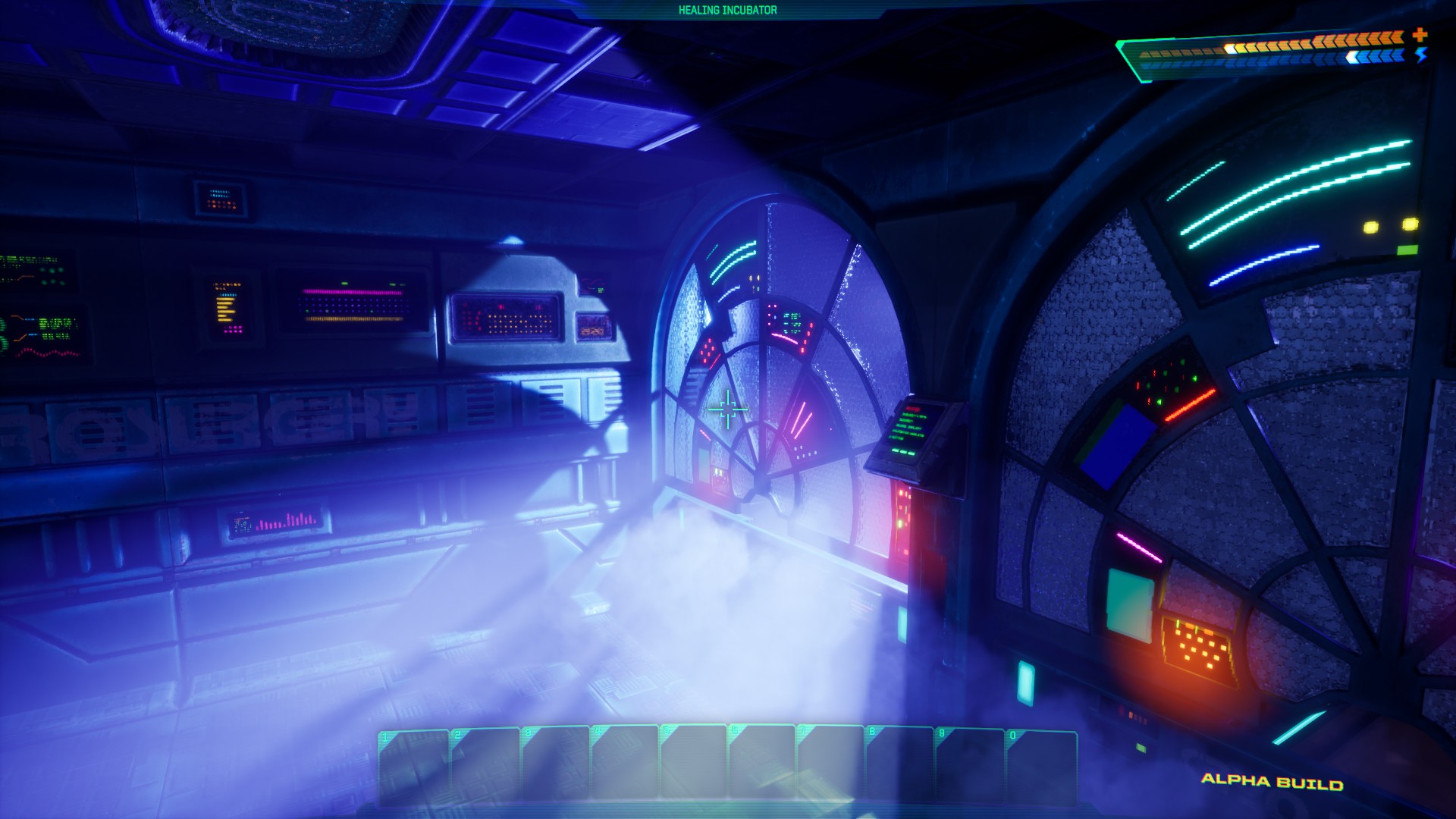 One of the benefits of exploration was seeing how great this game looks. This game looks incredible, but I found fascinating is how they made it their own. You look at a distance, and everything looks new and polished, but most of the textures up close are actually purposefully pixelated. This mix between old and new looks great and unique, and I loved every bit of it. Another thing I found interesting was with the storytelling of this game. The entirety of the story relied on audio logs and environmental storytelling, which I think is a good way of telling a story while still keeping you immersed in this world.

Exploring a giant area is too easy though, which where combat comes in. It’s here where I can see the connection between this game and Bioshock. The gameplay has that slight bit of survival horror to it, in that you have a low amount of supplies, but not a scarce amount. You have to make your shots count, and you have to play carefully as for you don’t have that many supplies either, and it’s here that I really enjoyed the combat of this game. I also found the gunplay to be a lot of fun, as for each weapon felt weighty against enemies, and the ability to lean helped give that feeling of trying to survive. Also, there are puzzles throughout that reminded me of the safe puzzles from Biohsock that were also fun to solve. Not all of it is perfect though. The melee weapon didn’t really connect with enemies well, one of the guns was broken for me, the common zombie-like enemy looks too goofy to be scary, the frame rate constantly dipped both in and out of combat, and I didn’t find any of it to be that challenging. Still, the combat is a lot of fun, and its relationship to games like Bioshock is what has me interested in this game. 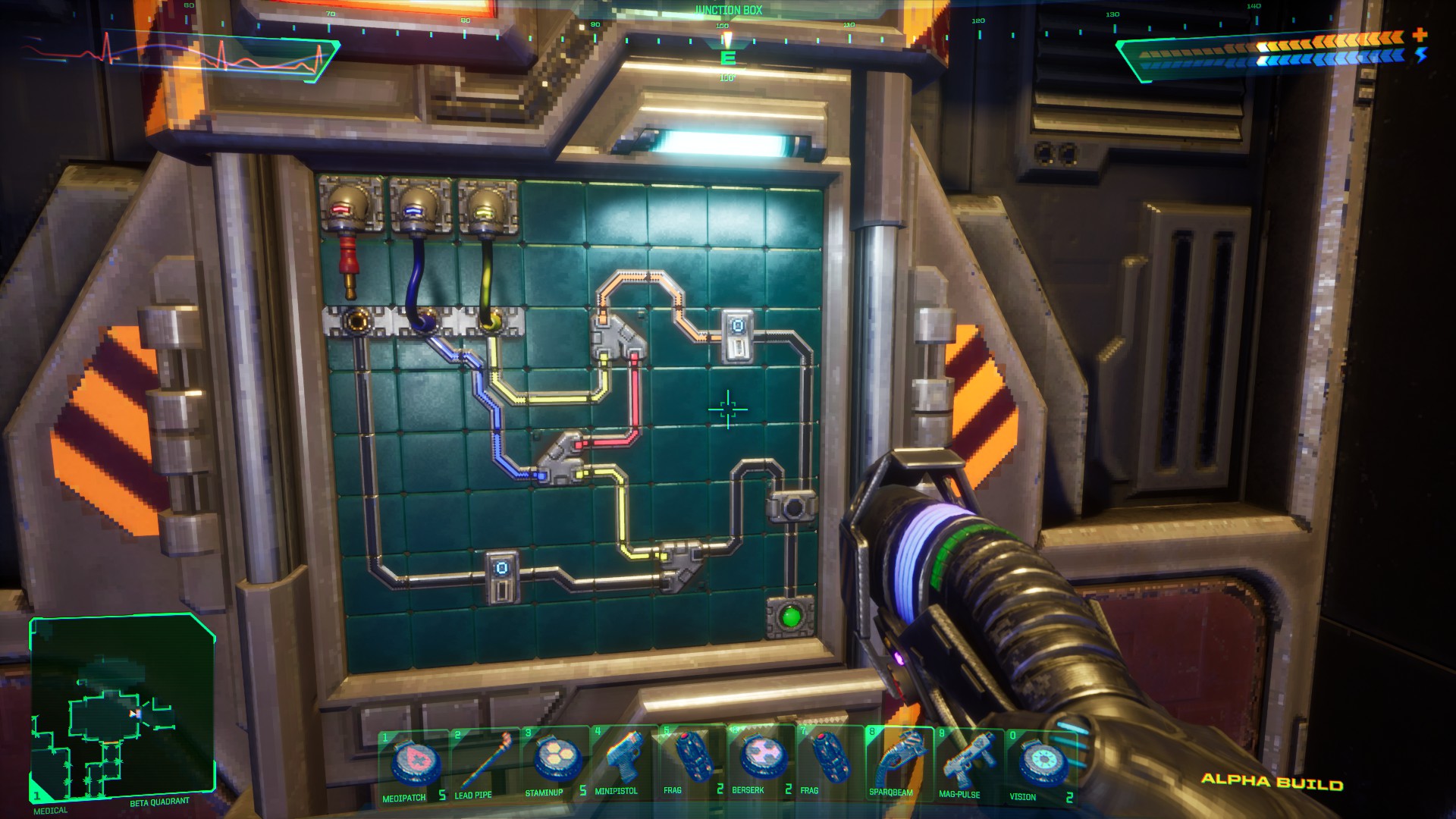 This puzzle involves mixing colors together and trying to end up with green, which I found neat.

System Shock is a game I now have some interest in after playing its demo. I think the game is super promising, but it needs some more modern touch-ups to its gameplay. I don’t know if I should be excited for this game yet considering it may not come out for some time, but it is a game that is certainly on my radar.