"E3" is Getting Out of Hand 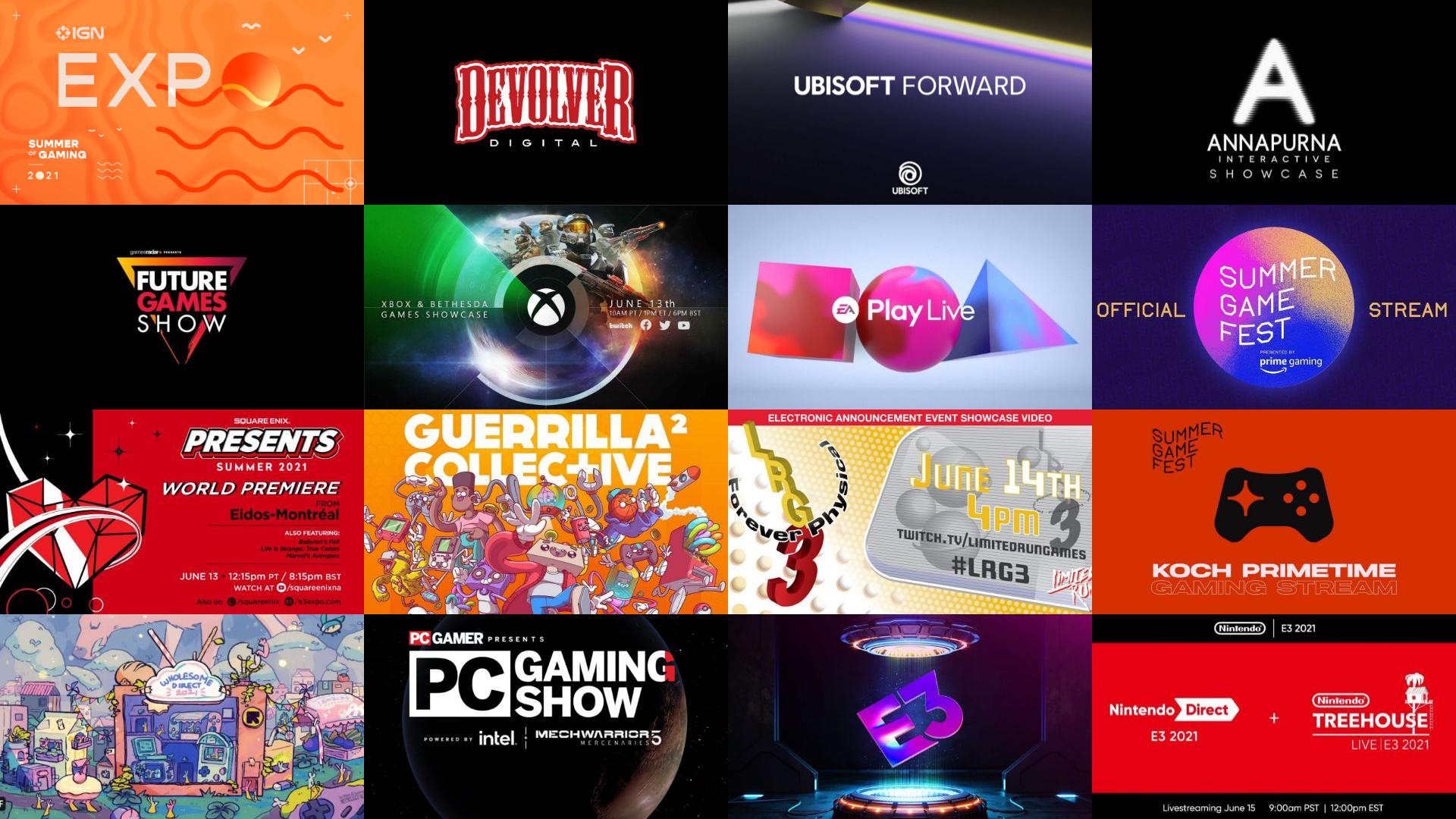 Normally during this time of the year, I would start covering “E3,” which at this rate is more of a blanket term for all of the gaming events surrounding the ESA’s Anaheim Convention Center Expo like the blast zone of a nuke. I have been covering “E3” (to the best of my abilities) since 2018, and each year I had to change up how I covered everything because of the changes happening to the main show and shows surrounding it. The year is now 2021, and “E3,” at least for me, has gotten out of hand.

So, what do I mean specifically? Well, for quite a few years, there have been a few companies like Ubisoft and EA who have split off from ESA’s event and started to host their own event. These events are close to actual E3 both in time and location, and while they did make everything a little more confusing, all of it was still pretty contained. Over the past few years, however, more and more companies started to split off and do their own event. It isn’t all that surprising, though, considering the games industry is only growing at this rate, and a lot of these companies have decided they have big enough followings to where they can showcase their own games more directly to consumers instead of paying the ESA to have a booth in the Anaheim Convention Center. Plus, it doesn’t help that the ESA has had plenty of controversies like their major data leak in 2019.

ESA’s E3 was beginning to change more to meet this new shift. They decided to open their doors to the public, and they even started talks about focusing the show on influencers and fans more than it being a press-driven event. That (and many other things in life) all changed when the Covid 19 pandemic hit, bringing the world to a crawl. E3 2020 was cancelled as a result, leaving a void that not even the alternative events could entirely fill considering most of these events were for singular companies. This prompted more companies to start their own showcases, including IGN Summer of Gaming, Future Games Showcase, Guerrilla Collective, and more. While it was certainly more to handle, there were still a manageable amount of shows spread out enough to be edible.

This year, however, is way too much. I’m not talking just one or two more shows than last year too much, I’m talking six-seven shows a day for three days straight too much. There are so many shows happening, that I have yet to find an “E3 Schedule” article that actually has every single event. There are events announcing events, such as Day of the Devs (which was part of Geoff Keighley’s Summer Game Fest this year) announcing an Annapurna showcase event. Some of these showcases are actually part of ESA’s E3, but even excluding those there are way more events than the previous few years combined. Koch Primetime, Summer Game Fest, Guerrilla Collective, ESA’s E3, Wholesome Direct, Ubisoft Forward, Gearbox E3 Showcase, Upload VR Showcase, Devolver Digital, Square Enix Presents, Freedom Games, Mythical Games, Take-Two Interactive, Limited Run Games Showcase, Nintendo Direct, PC Gaming Show, Bandai Namco, Capcom, and EA Play Live are just some of the over forty events I could find that span the months of June and July.

Now of course, one could argue that not all events are the same or at the very least people can wait until the end of all this mayhem to find the highlights. Both of these things are true, but neither are true for me. As someone who writes and who has covered E3 in the past, I feel a need to soak up every bit I can so I don’t miss out on anything. Also, even if I was just an enthusiast who didn’t need to be on top of things, why would I want to wait until late June or even July for the dust to settle? The fun part of E3 is being right in the middle of it, whether it be for writing or viewing purposes.

Another issue about skipping out on the smaller events has to do with the games being announced. Last year, I noticed a lot of games were being announced by multiple shows. A single game could bounce back and forth through multiple events, making it hard to pinpoint which event it was originally announced at and how many actual new announcements were being made, and I’m expecting that same soupiness of trailers to infect this year too. I’m guessing every show is going to have at least one or two brand new announcements, which means watching these events for the new announcements while having my time wasted on the old ones. While it’s easy to know that the single-company shows like Ubisoft Forward and Bethesda Games Showcase will show their own games, there are still a lot of shows that will showcase any game, and I’m expecting a lot of repeats. Even the single-company shows aren’t off the hook either, as they usually don’t have enough to justify an entire show to themselves. Right now, all of these alternative events are starting to feel like where streaming services currently are: it started out with just one service (Netflix), but it has spiraled out of control to where every company has their own services, and a lot of them are trying to ride off on having one or two popular shows that the other services don’t have.

None of this is to say that there shouldn’t be competition or variety though. I’m not saying there should only be E3, and I’m not saying there should only be Netflix, as having a healthy competition usually results in better outcomes for the consumers. Or better yet, someone discovers a new way of announcing games just like how streaming services came out with a new way of experiencing shows and movies, and that will at least solve this problem until the new solution becomes overcrowded. While I think E3 (despite its many issues) largely contained the industry from exploding into what it is this year, I don’t think they should be the sole gatekeepers on content for the sake of convenience. But at the same time, there needs to be a limit. Maybe spawn multiple large E3-like expos or showcases and have them compete for each game announcement, or have a week dedicated to games announcements each season where different companies can take up different seasons, or even limit games to only having two announcements during showcase season: one for announcement, and a second later down the line showing gameplay and a release date. I don’t know if there is a perfect solution, but as the industry gets larger, this issue is only going to balloon if untreated.

So, am I going to cover E3 this year? Unfortunately, not really. I may put out my highlights at the end of all this, but I’m not going to cover it like I normally would. It’s a shame, because as difficult and time-consuming as covering E3 was in years past, I still enjoyed doing so because it was fun being caught up in that whirlwind. Hell, I even had plans and half of a blog written up for this year’s E3, in which I was going to do five-day recap blogs on my highlights of each show. But it was when I started to write down every event that was happening this year on a piece of paper was when I decided to not cover it this year. If games media outlets couldn’t even manage to get every event on their “E3 Schedule” article, how the hell am I to cover all of it by myself? How could I even watch the six or seven events happening each day on June 12th, 13th, and 14th, let alone write about it? I suppose I could cover only the large events, but that would mean cutting out the small events where a lot of the indie announcements live and that wouldn’t be fair. Knowing me, I would try to force myself to watch all of the events to give every event and game a fair shake, and that simply isn’t possible for me to do.

I love E3 season, and I’ll try to keep up with it as much as I can, but I think this year is a breaking point. Rather than try to expand, I think it’s time to condense. Less repeat announcements, less older announcements with little to show this time around, less time spent on interviews few people care about or musical performances, and ultimately less shows. Both as a writer and viewer of these shows, I believe it’s time to pump the brakes on all these shows as it is getting confusing and difficult to follow for both people within and outside of the industry.

P.S. I did put out my highlights after all this, and you can find it here.