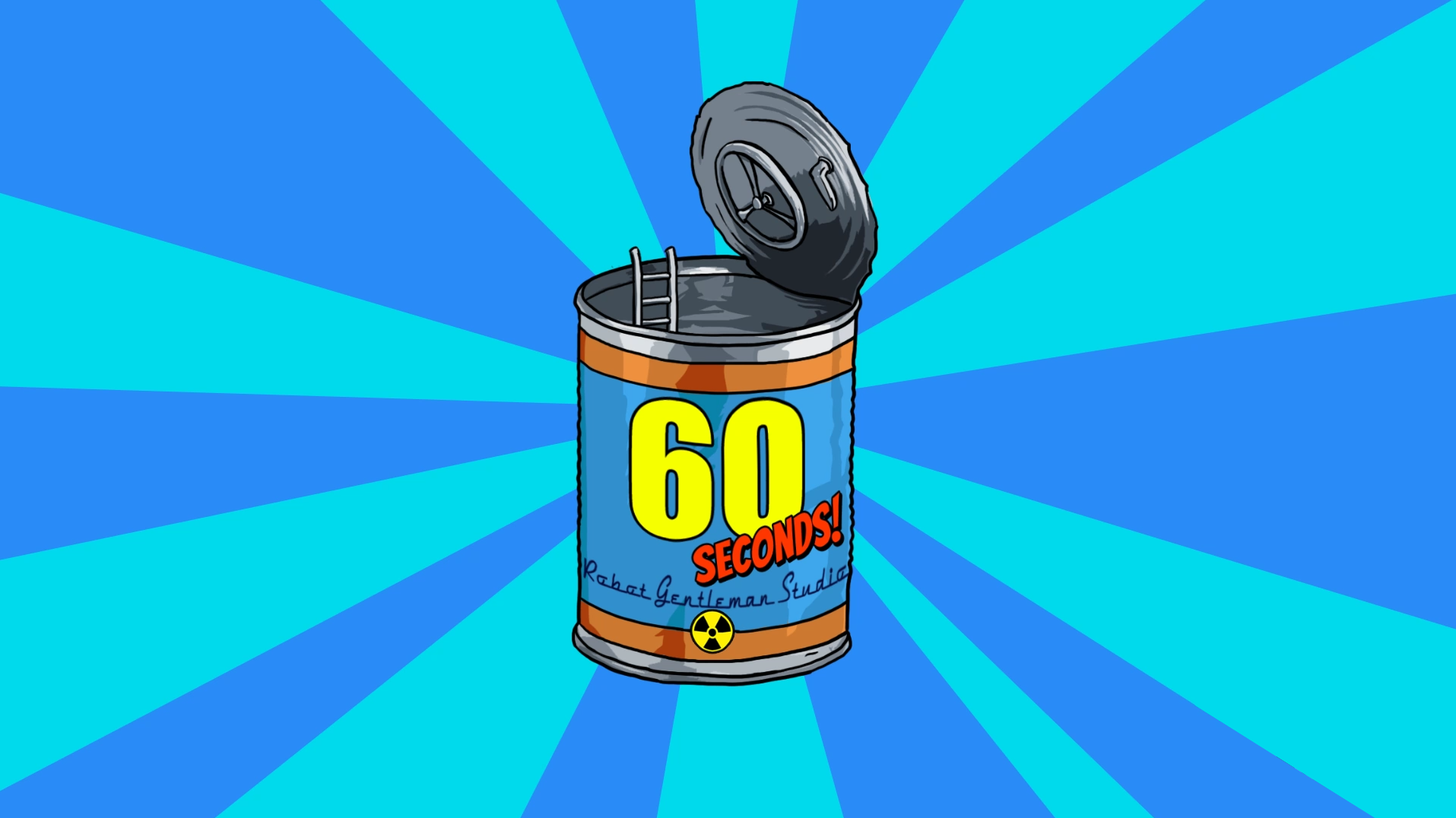 From the independent games developer Robot Gentleman comes their debut title 60 Seconds!, a dark but humorous choose-your-adventure style game with survival elements where you must gather supplies, save your family, and hold out as long as possible in your handy personal fallout shelter in the wake of atomic annihilation!

The majority of 60 Seconds! Takes place in your humble homey bomb shelter as you try to survive day to day making tough decisions from how to allocate food and water between family members to deciding to venture into the radioactive wasteland to scavenge for supplies. There are four game modes including Atomic Drill (Tutorial), Apocalypse! (Scavenge + Survival), just Scavenge, and just Survival. With the exception of the Atomic Drill mode you can play each of the modes on one of three difficulties: Little Boy, Fat Man, or Tsar Bomba in order from easiest and most generous to hardest and least forgiving. Prior to braving the wastes and fending off merciless raiders, however, you can learn the basics in the Atomic Drill game mode. 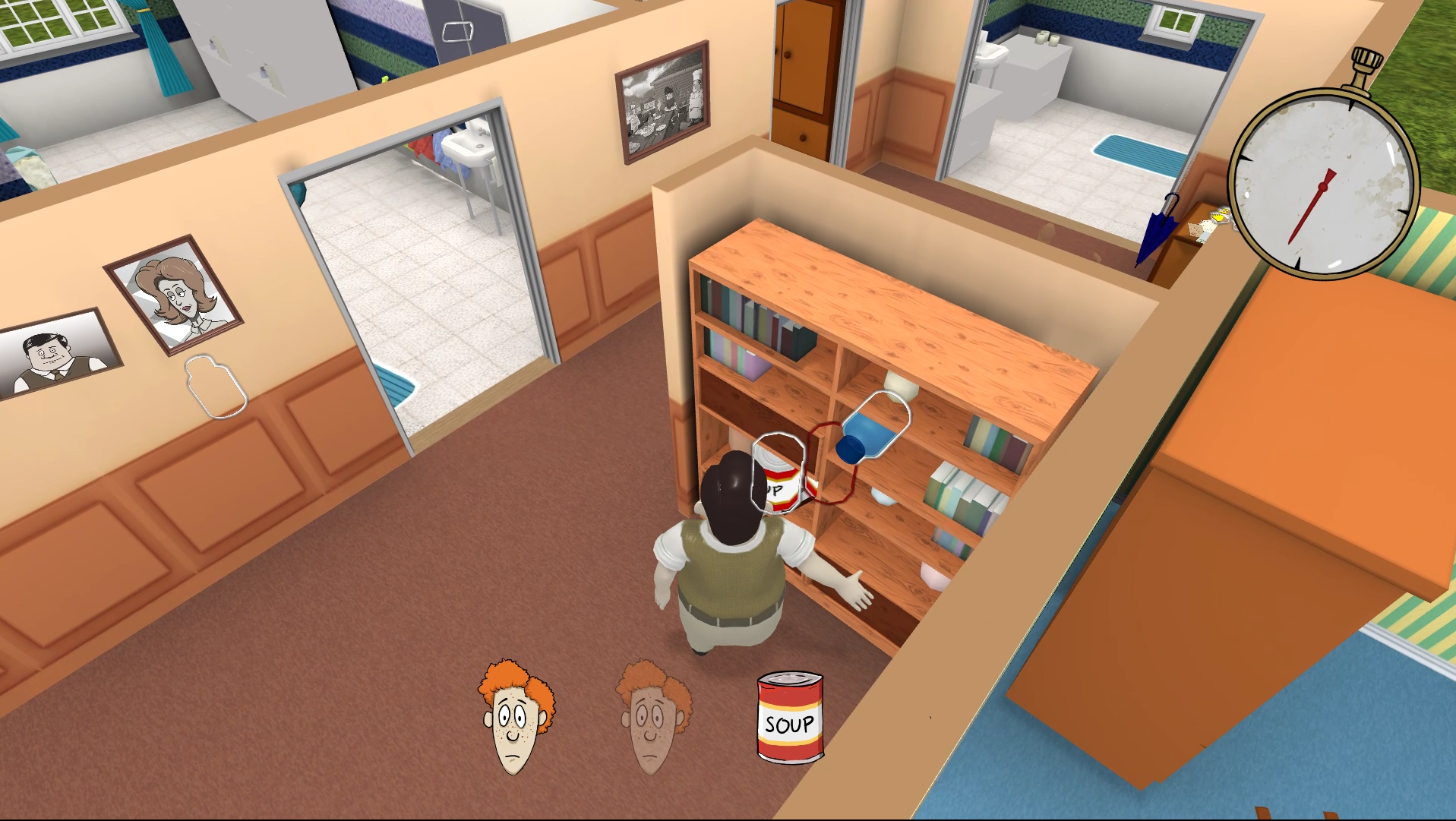 In this section, you learn all of the basics of the game and even play through the first 10 days of a government sponsored simulated post-apocalyptic scenario. With the help of a friendly neighborhood Soldier, you will learn how to make the most of the 60 Seconds (hence the namesake of the game) before the bomb hits. During this time, you play in third person as Ted, the father, in a 3D version of your house scrambling to gather as many supplies and family members as possible before time runs out. You have limited space, so you have to pick and choose what you take with you on each of your trips to the shelter. Do you take lots of water but sacrifice food, what about the radio? Will you be able to get rescued without it? These kinds of decisions must be made quickly, for if you are not next to the shelter when the time runs out…well it doesn’t end well for you or your loving family. Once you have mastered the first phase of the game, you move on to the main body of gameplay, survival! 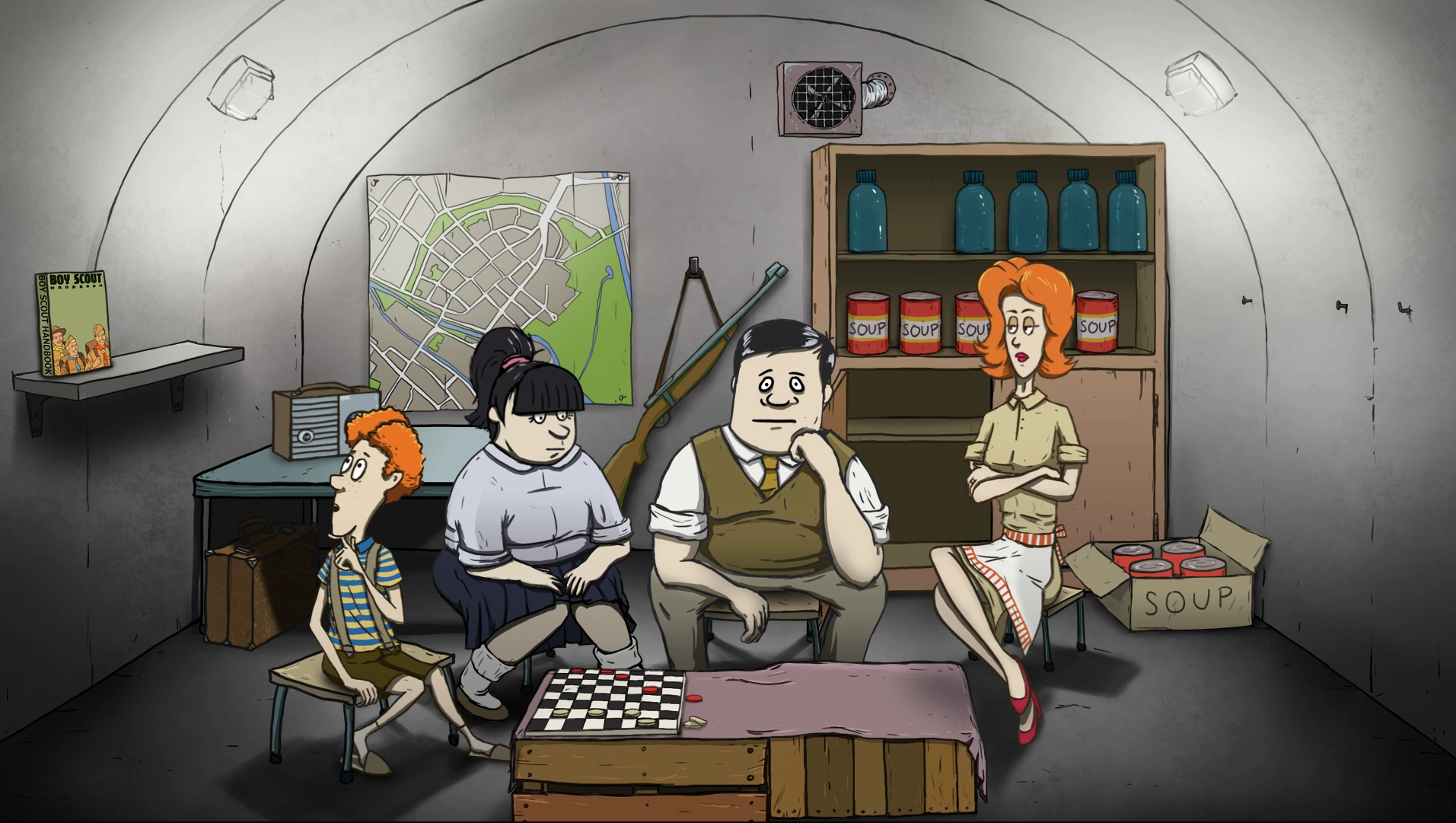 Switching to a 2D cartoony view of the shelter Ted, his daughter Mary Jane, his son Timmy, and wife Dolores (assuming you saved them all) must work together and take turns braving the nuclear wasteland to stay alive. Each day starts with a summary of what happened after the previous day as well as a run-down of how each member is fairing, all written in a journal detailing the events of your efforts. Next, precious food and water is rationed out to each member and the choice of whether or not to travel outside is made. The day ends with either a random journal entry for flavor or an event where you must make key choices that will directly affect your future success or failure.

The key to surviving is effective supply management. Too little food and water and people will run away and never come back or die off leaving a grim skeleton in the shelter to remind you of your failure. Excessive boredom can be dangerous and can render even the toughest minds insane leading to random irrational decisions including running away. Journey outside without a gasmask and you may just become gravely ill and perish without proper attention. Every few days, someone is going to need water or food, clued in by a helpful reminder in the daily journal. Your reserves will only last so long, so you have to send people out to scavenge for additional supplies. After a few days when they return, that is if they do ever return, they will bring back a random assortment of goods or sometimes come home empty handed. It tends to be a big juggling act and is likely you will drop the ball now and again.

The daily events are really a mixed bag. Some events will have immediate consequences, good or bad, depending on your response. A herd of animals is seen not too far outside of your shelter; do you attempt to hunt them? Yes? Whelp, congratulations you just got Ted killed! Others are more of a long-term investment of sorts, sometimes taking 10+ days to resolve themselves. For example, at one point you are given the choice to help a pair of twins early in the game (10+ days) and if you do and manage to survive to 60+ days, you will be immediate saved by them winning you the game! 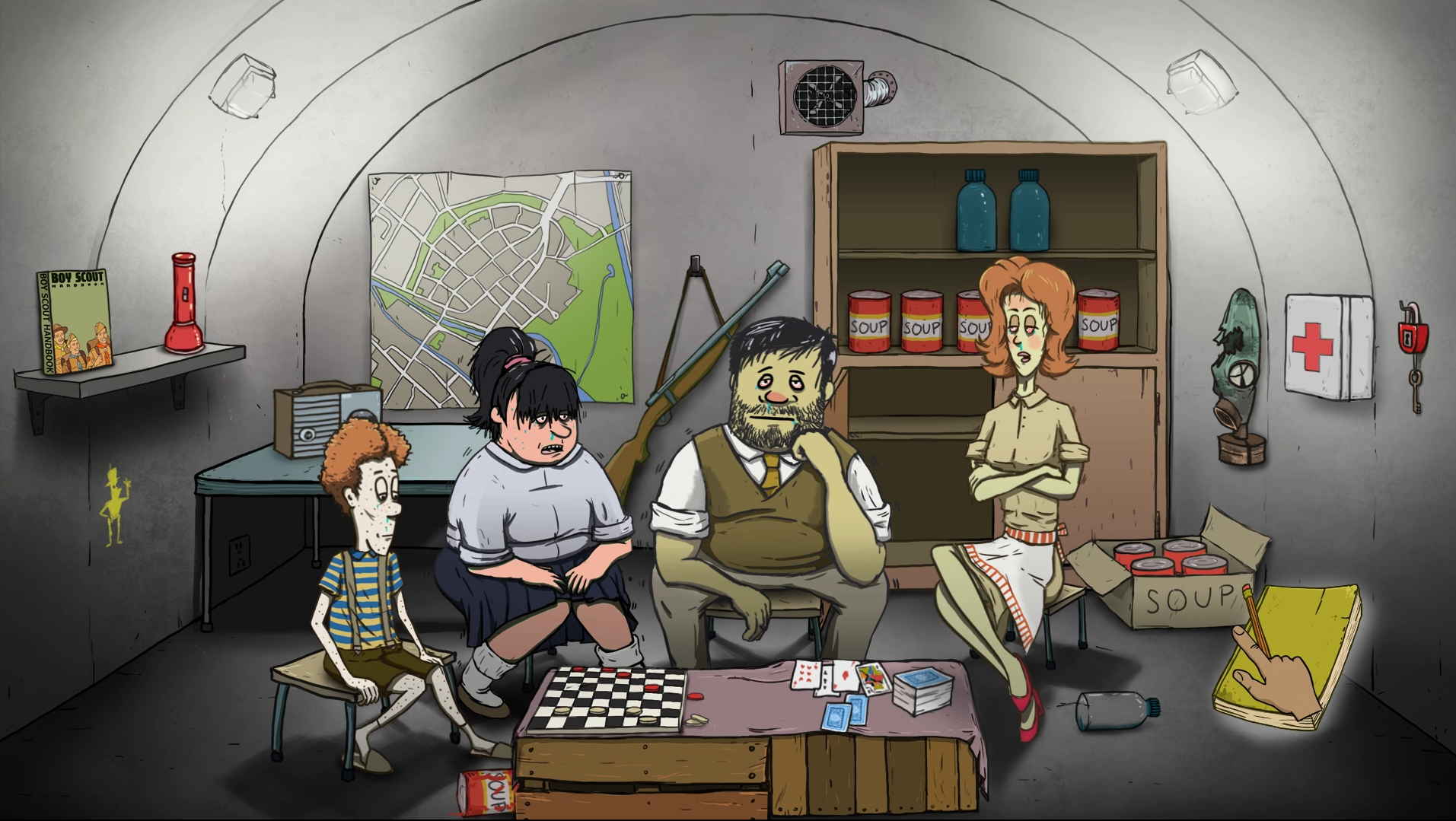 As previously mentioned, the game contains both 3D and 2D sections. The 3D part is very basic graphically, even on “Explosive” settings (highest settings). The animations serve their purpose but are similarly basic. Don’t let this make you think this section is dull however, as the cartoony feel of the game in maintained here and is accented by comics-like BAM!s and POW!s as your run into things crashing through your house in a terrified panic racing to gather supplies before nuclear death arrives. Since this section is only ever a maximum of 80 seconds (60 seconds plus 20 seconds of scouting time on the easiest difficulty), it doesn’t really need to be mind-blowingly hi-fidelity. In the 2D survival portion, you can see all of the supplies you have gathered thus far, changing as you use them up or they are damaged. The family will change too depending on their status. If Mary Jane is crazy, she will switch positions to standing on top of her stool making herself look like a chicken. If Ted is sick, he will turn green and his eyes will be blood shot. Bandages will appear on Dolores if injured. If someone dies, their model will be replaced by a Skelton wearing their clothing strewn about the shelter; morbid but also mildly comical. It’s a nice way to visually convey each member’s status. Also be on the lookout for all the hidden pop/gamer culture references hidden within the events, art, and challenges, such as a dead courier in the screen for getting locked out of your shelter or an event where people dressed as knights banging rocks together show up looking for a holy cup…

The music of 60 Seconds!, though limited, is pretty good. It does a great job of matching the happy/blissfully unaware times at the prior to starting the game, and really captures the desperate and grim nature of the game during play. Unfortunately, as stated, it is somewhat limited so the music will get repetitive after you have been playing for a while. As for the sound effects, during the Scavenge phase it sounds like you are smashing things with a baseball bat when you bump into them which is most likely by choice and does make trampling through the house a little funnier. Additionally, the biggest use of sound effects is in subtle sound cues during the fade to black between each day. These will sometimes give you hints to the outcomes of the previous day’s event choices or will let you know someone has left to/returned from the wastes. A random gunshot heard before the next day loads can be really quite ominous and adds just the slightest bit of suspense that I think benefits the game.