The Update and PSP Poser

4:57 AM on 01.23.2009 (server time)    0
Hello, and it�s a big welcome back to Mr. Batthink, one of the many lurkers that this wonderful site called Destructoid has. For those new to me, and wondering who the hell I am, this amazing lad of 27 years of age who has overcome mental trauma, public and popular distain, as well as the odd mistake in the job-seeking department, and got life back on track (thanks in most part to God). A gamer since the C64 years, I�m on DToid�s IRC channel, trying to get attention like the attention-whore that I am, and occasionally farting and sneezing at the same moment (the IRCers there may know what I mean, since they actually saved my documentation of the slightly painful and surprising incident).

Anyway, I�ve had to recently move house, which explains my sudden almost-disappearance from the internet. Still, I�ve been able to use my local library�s connection, whilst BT constructs a 6MB broadband connection in a bid to keep my custom. That connection better be enough for my Xbox 360 to play online decently. 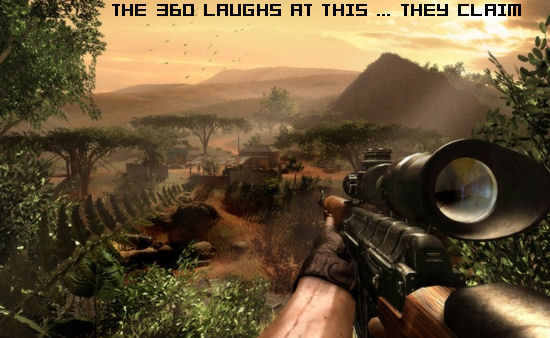 Far Cry 2 I have finished, and found it a worthy enough effort by the boys at Ubisoft. It plays well, with only the frequency of weapon-rust and, subsequently, weapon-jamming becoming an annoyance. Well, that and one particular mission where everything went FUBAR. Upon entering the corrugated iron-shed of the head of one of the factions (war-torn African country, y�see), I spotted the aforementioned target. He cried, �Charlie, what�s going on?� before I increased his weight somewhat with a hail of lead bullets. The target then decided to curl up on the floor, and, in the middle of a gunfight with understandably angry bodyguards, spasm out of the building through the south exit. Said bodyguards displayed use of the ability to float upwards against the building, even to the point of shooting through the roof. I knew this was going to be a hard mission, but honestly�

As for Eternal Sonata, I�ve had to put playing the game on hold. A very lovely looking game, along with a research of Chopin�s life that helps the game achieve a personal touch. However, a couple of little stinkers (I won�t name names) misplaced my scart connection at the youth club where I took the 360 to, so I�ll have to wait until I get it back to finish it off. I just hope the ending was a bit better than Far Cry 2�s climax. Note to self: try to persuade someone on Retroforce Go! (DToid�s best podcast) to parody Polka�s whiny voice. Hopefully Topher Cantler will be made to have a go.

This has lead me to plug away at the PSP (my DS, for which I need to complete Final Fantasy III, is still being fixed; I can�t be bothered to set up the PS2/Wii yet). I�ve completed most of the games (sixteen, count �em) on the SNK Aracde Classics, and I must admit, I�m interested to see what they release for volume two. I heard there was even a version for the little Wii. Do tell me how the controls ended up for that, will you?

I�ve never been a big one-on-one beat-em-up fan (only six foot, sadly), so Art of Fighting, Fatal Fury, KOF �94 and World Heroes (the poor man�s time-travel ruckus) did little to change my view. However, Samurai Shodown (Showdown? A play on Shogun?) actually had me grinning. Playing as Charlotte, I cut, and was cut down by, the opposition in a similar manner to the other bunch of games, but I found it more fun than the rest. Could it have been the fact that less moves were required to learn on each character? Or just fighting with a sword made the difference? Or a final boss where you didn�t feel you needed to spam a single move? Either way, I want to check the other games in the series. This might be the beginning of a wonderful relationship�

Otherwise, more diamonds in the rough. Looking a little ragged were Sengoku and Burning Fight, a couple of scrolling brawlers that stand in the shadow of Streets of Rage. With tins begging for change. In need of a change was King of the Monsters (enough said), the half decent Last Resort couldn�t get sued by R-Type because there was no �spaceship and drone� copyright and Top Hunter was an okay platform adventure. And there is no easy mode to Magician Lord, a game cursed with the most diabolical translation imaginable (�Be dead down there!�).

The diamonds started appearing in the form, constructed by the bases upon the dirt within the stadium, of Baseball Stars 2. To my mind, it is in the running for Best Arcade Baseball Game Ever, unless someone knows a coin-op that says otherwise. The right amount of character, sound effects and drama to draw the casual player in, and enough to enthral the hardcore one.

Then, what can we say about the game that is synonymous with the letters SNK, Metal Slug? I�m sure you already know that it is the best parody of commando-based shooters out there, with lovely animation and drawings to boot. A little less slowdown could have made things better, but it is still fun. Coming along one year later in the Neo-Geo�s life-cycle, and Shock Troopers could have taken that award that I mentioned above. More arcadey, more-anime-ish than Metal Slug, with a top-down perspective than a side-on one, it has a place in my heart but not on the pages of history.

The only game I�ve left to mention is Neo Turf Masters, or to put its full title, Neo Turf Masters 3: The Next Glory FX Turbo Hyper Kitchen Sink Unnecessary Long Title Edition (try to guess where I added words). It�s arcade-effort on the beautiful game, whether you call it football or soccer you needn�t argue about, since SNK didn�t offend anyone by including either word in the title. A very good effort too, but some way of increasing the time of a half surely? This is an arcade classic, after all.

And finally out of the SNK-gasm, and into the RPG haven I regularly inhabit (btw, did SNK do Koldeka, the PS1 RPG with the World�s First Welsh Videogame Heroine? I�m pretty sure�). Star Ocean is a game that never made its way to British shores in its original SNES form. I am sad about it, but no more. I purchased a copy of the highly-regarded series in its new Director�s-Cut Hyper 2008 Edition for the Sony handheld, and I am happy. It has a �Star Trek� plot from the view of those the other side of the Prime Directive. I�ve travelled through the land, levelling up my group to Level 30+ proportions, and I�m about to have a friendly chat with four kings of Roak. No doubt they�ll be happy to see two Earth space-travellers, two be-tailed warriors with the most unlikely hair-colours imaginable, one highlander, one emo-featherfolk (*cough*angel*cough) and a lady handy in orb-mashing (who may or may not be undead), ask about an Eye of somethingorother. A joke can be made out of this, surely?

And for some reason, there seems to be a cut in the first cut-scene of the story. It seems to happen just before Millie announces that �it�s all settled, then�� and then you start control of the game proper. Do you think that short period had to be removed in order to fit the rest of the game in? Would that scene be floating around the internet, the desktop recycling bin or the cutting room floor?

And that brings an end to my activities for the while. By the time you read this, I�ll be seeing if my internet connection is up to snuff on the 360. In the meantime, a little thought; just because Sony isn�t doing all that well with the PSP, doesn�t mean that they�ve �failed�.

Looking above, it�s quite clear why I show my support. Retro-games or new versions of them get released quite a lot on the PSP, and at the beginning, that was nearly all the PSP had on offer. Games like Exit and Loco Roco came out, but didn�t help change people�s minds about the amount of identi-ports. It became a serious problem in my eyes, since I heard a rumour that Level 5 would release a Dark Cloud sequel on it and got me salivating for its mere presence (the game that they eventually released was Jeanne D�arc, an RPG I still haven�t had the pleasure of trying). You can�t help but feel let down by Sony and their PR.

Nowadays, people here are waiting for that Final Fantasy Game Where You Have A Chance To Beat Up Tidus, but the fact that anyone is fapping to a game that is on a handheld that isn�t made by Nintendo is akin to a minor miracle. Sony has done amazingly well to just get a foothold in a market where Nintendo dominate. Remember the Game Gear? The Atari Lynx? The Neo Geo Pocket, even? Didn�t they do well? But did they do better than the Sony PSP?

I�ve got a few personal reasons of my own to support it. Europe is getting games that never got on the PSP, like Tales of the World or Star Ocean. This may be true also of the NDS, which I love as well, but that is no reason to knock the other handheld.

Rant over. Soon, I�ll be introducing a new blog with a different topic that you can contribute to. All I can say is that the title is �Perfect Match�. See if you can guess what that means.

Batthink out.
#Community
Login to vote this up!