Fail List: The Console/Platform Wars Will Never Be Over Edition 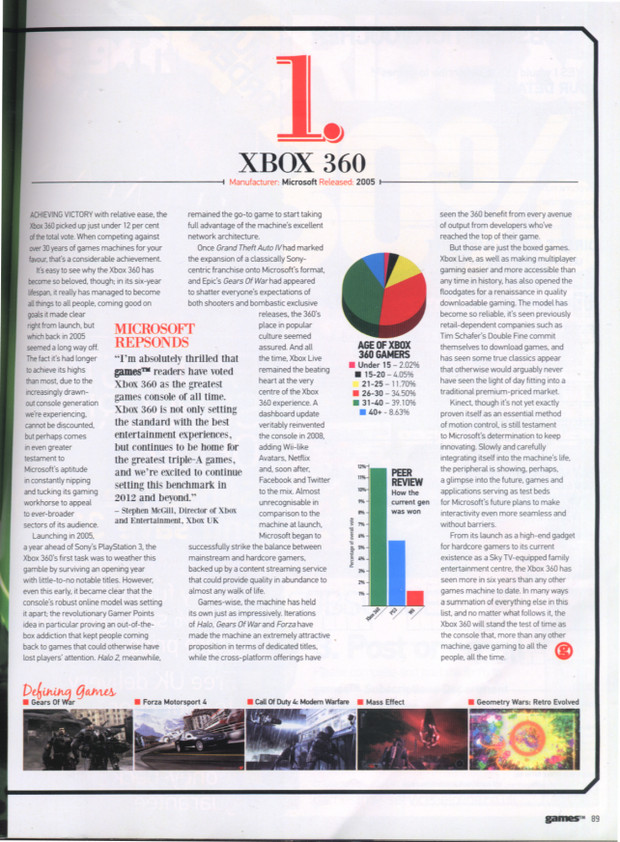 See? That was surprising! Considering how many broke down and how many votes the Playstation 3 got (half compared to the winner!), you�d think it would be lower. But no, the Microsoft Xbox 360 is GamesTM reader�s favourite console. Explanations? Well, the pie chart on its page dispels any myths about pre-teen fanboy spamming, because they only made up two percent of the vote for the console. Over three-quarters of the 360 votes belonged to gamers 26 years-old and upwards. It was run very close by the SNES (my prediction for the top), which had a huge percentage of the first choice of each gamer, but featured far less as second-to-fifth choice. This polarisation, including decent survival of a first year without many big titles thanks to Gamer Points and backwards compatible play with Halo 2 helped the leader. Along with the expansion of the Grand Theft Auto series to the platform as well as Gears of War, Forza and more Halo, the updated experience of Xbox Live to include both mainstream and hardcore gamers as well as downloadable titles (from established developers as well as independent), those are the reasons GamesTM holds up in support.

And my ideas of the rest of the places? Well, I�m glad the Game Boy and the NES managed to squeeze into the chart, although they were under threat from the Nintendo DS, which was only 0.27% off the original handheld�s standings. It�s proof of how well Nintendo managed to keep their vision on what was important in their portable gaming machines. As for the Wii, it factored only just over 1.5% of the total console gaming vote. The Big N will need to learn from that particular rating.

Interestingly, mobile gaming for Apple is growing well, with iOS getting 6.17% of the handheld vote, close behind the Game Boy Colour and Sony PSP. The Amiga had a lead of almost 5% percent lead from the PC in the gaming computer vote, whilst the poor old Atari ST only got 0.61%. What also intrigued me was that the Dreamcast managed to accumulate double the total votes over the GameCube, as well as matching the favours towards the Playstation 2 two-thirds of the way. I find it a little mindboggling that, although the Dreamcast died a premature death in the West and the games (and not the console) sales were what earned Sega the profits, it didn�t survive even with that amount of support.

So what do you think? Be good, comment nicely and don�t start a flamewar.
#ShareonCommunityBlogs
Login to vote this up!