3:19 PM on 03.20.2008 (server time)    0
So I was planning on doing this a little later, after I played some more Smash, but Rorschach’s contest finally compelled me to get this thing under way.

The following is a critical look at the biggest and baddest (in a good way) Wii release yet and possibly for a good long while hereafter, Super Smash Bros. Brawl. I know for a fact it will be the last Wii game I ever purchase. I simply am fed up with Nintendo’s online and kiddie-oriented bullshit. As a pretty hardcore gamer, I’m sick of them catering to new customers rather than those of us who have supported them for so long. I’m done with it, but that’s not here nor there.

This is all about the game they released and how I feel about it as a whole. It will likely be comprised of multiple parts as I have a lot to say. For this first part I will cover the graphics, content, and gameplay. Later iterations will include in-depth analysis for every character on the roster as well as suggestions to characters I feel deserved to make the final cut.

Let’s get it out of the way right away. I think this game looks fantastic. The gathering and conglomeration of all the separate character worlds and styles really impressed me. I heard some people find it too odd for their liking anymore since the game has become so much bigger than its humble beginnings as a fighting engine demo, but I think it fits well.

Despite the series’ attempts to become something bigger and more profound than it began as (thanks to the Subspace Emissary) in my mind the game is still about little toys fighting it out at the behest of the almighty hand. That simple idea as to why these characters would ever come together simply makes sense to me. Much more so than a giant cartoony universal threat ever will. Plus, I have fond memories of the original title (and its commercials) and like to think of it as an evolution of that idea. 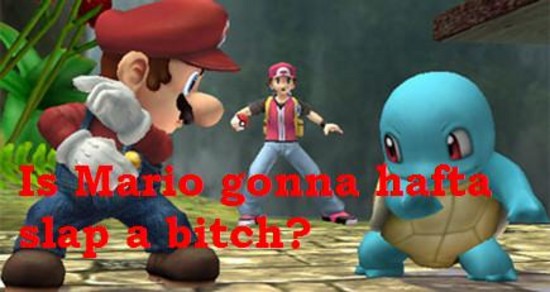 The other big complaint leveraged at the series is that there is too much going on once you factor in items, trophies, and the newly introduced Final Smashes. Too many veteran players get their panties in a bunch because their kid brother or girlfriend can manage to kick their ass once and a while. Their dominance (and surely their 1337ness) is called in to question. That is not allowed.

I, on the other hand, love it. I openly dislike playing games where either A) I win all the time when playing with friends or B) my friends win all the time when playing them. Anyone on the losing side knows it’s no fun to lose. I love the fact the game throws so much unpredictability at you that a true first time player can jump in and kick ass right alongside a veteran. Although I usually tend to turn off items when playing by myself and against the computer, I love to turn on items and Final Smashes with friends. The crazy chases that ensue when certain items (especially the Smash Ball) appear are just great fun. Brawl is one of the very few games I have ever played where I still manage to have fun playing when I lose. That’s the single greatest praise I could give it.

In summation, the game is simply fun, which is the most important reason to play any game. Despite my gripes, I still have a blast playing against friends and the computer alike. It’s one of only a small handful of games my girlfriend even attempts to pick up and play with me, so that means a lot to me, too. Sometimes I truly don’t wanna play Rock Band or Guitar Hero 3. They just get more tiring than Smash. While Kirby spamming is mostly to blame, the control mechanics and unpredictability are the other two big factors. Thanks, Nintendo.

Thanks for reading. Next up will be an in-depth critique of every character adorning the top row of the roster and maybe a suggestion or two for a character I think should have made it in.
#Community
Login to vote this up!