If you love it, change it: GTAIV Pissed List

11:16 AM on 05.03.2008 (server time)    0
This is a repost of my blog from yesterday in which I raise some problems I have with the current belle of the gaming ball, GTAIV. I forgot the Monthly Musings theme, so here it is all titled properly and such.

I’ve been playing for a little over 16 hours since I got the game Tuesday afternoon and am roughly 34% through the title. Nothing to be overtly proud of, I certainly haven’t lost sleep over the title, but I have been taking my time enjoying the game and what is has to offer. Unfortunately, I’ve also had to experience the inherent flaws the game has.

Now, I don’t plan on sitting here and spewing hatred all over the place, I love the game. I think it’s the best represented city in any game ever made, but beyond that there are some glaring gameplay and mechanic faults that I believe should have been addressed prior to release. And, no. I don’t necessarily mean the driving. I think the physics engine is robust enough to warrant a more realistic experience than any of us were ready for and now we’re all pissed. I don’t have too much of a problem with the driving, so forget about me bitching about it. I have other points to make. Now go ahead and read them. 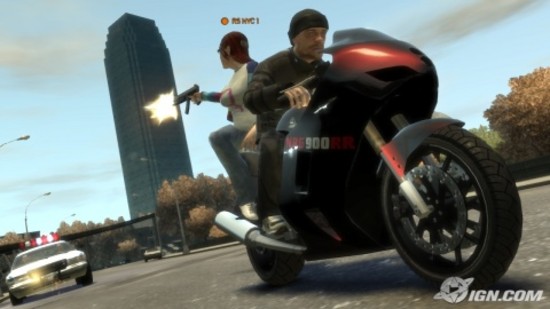 Is this what it's like to play GTA with friends? I wouldn't know anything about that...

I mean, fuck, Rockstar. Come on. Everyone going into this game’s release was anticipating sales of at least $400 billion or more. That’s millions and millions of titles. How did you not have server capacity at fucking maximum? Did you forget the game had multiplayer or something?

Beyond the terrible implementation of the cell phone (honestly, why does it take two button presses to get to the first worthwhile menu screen on the damned thing?) how the fuck do you expect me to enjoy half of what your game has to offer if I can’t even get online to play it? Since you (very intelligently) don’t offer any sort of lobby service/ability, you either have to land in a game or be shut out of multiplayer completely. Great idea. How about you put me in some sort of limbo lobby where I can wait and be told when there are matches available? That way I know when I can play the game I paid $60 for and I don’t have to sit and aimlessly try to access my cell phone and reconnect every 20 seconds to no avail.

And don’t tell me to play the single player. I’m tired of single player right now (not that it’s not great, which it is, just saying). I played it for 4 or 5 hours today. I wanna shoot other people in the face online with my buddies now. And no, that is NOT too much to ask.

/rant
#Community
Login to vote this up!