8:44 PM on 10.14.2008 (server time)    0
So, as part of a new (quasi) series to hopefully get me back into blogging, I’m going to start writing reviews for the games I receive from GameFly as I finish playing them. I’ll offer my thoughts on the title as a whole, as well as whether or not I deem them appropriate to people’s time.

Some of these titles may be a bit older since GameFly doesn’t always ensure I get the newer game I’m in the mood for, but most of the older titles are now cheaper, so they may still be good deals for anyone who hasn’t picked them up yet.

I hope you all enjoy.

The first game I want to start this series off with is the second to last title I had rented, Overlord. As many people know it’s a 3rd person action-strategy hybrid for the 360 where you play as an evil emperor-type of dude who is awoken and needs to rebuild his mighty castle and throngs of minions. On the surface it’s a pretty original idea for a game until you play for a while and realize it’s a poorly-veiled Pikmin rip-off in a coat of decent fantasy paint. 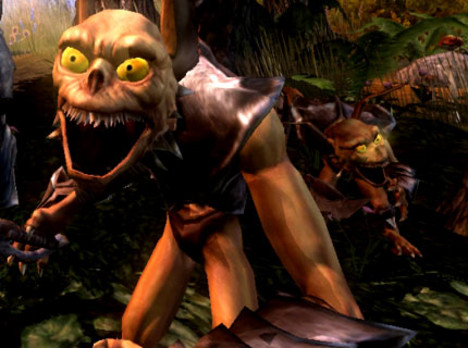 This wouldn’t have been too much of a problem had the game allowed for wide sweeping battles (alleviating most camera-getting-stuck issues) but more often than not I found myself crammed in tiny tunnels and maze-like corridors fighting the camera system more so than enemies the entire way. I gave up and shipped the game back after unlocking the ability to use the blue water minions (the fourth available) because traversing the cave they were found in was so frustrating I couldn’t take it anymore.

Overall Score: 6.0/10.0 – I can’t recommend this title unless you’re really hankering for a Pikmin-esque title for your 360 and/or you find it on the cheap (I’d say $15 or less would be acceptable for purchase) otherwise, DON’T EVEN BOTHER.

PS – As long as they fix the major control issues, the planned sequel will have serious potential.
#Community
Login to vote this up!