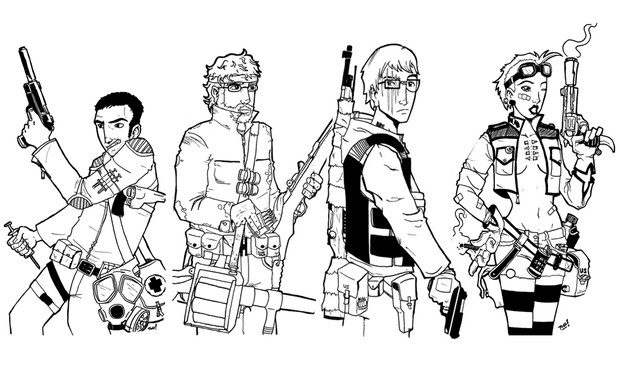 One of the players with considerable artistic talent was kind enough to render a few of our characters after several months of zombie survival. I'm second from the right. My face hurts.

But something was lost rather quickly as they leveled out of the helpless zone. The frantic intensity slowly evaporated and was replaced with the confident exuberance of killing hordes of enemies. Both of these reactions to gameplay are, of course, great and replicating these sensations over and over without losing them to monotony is something every game designer should chase. But after the game wrapped up a year later, a full 12 months of progressing from mild-mannered college students to full-fledged post-apocalyptic warriors, do you know which moments were still talked about the most?

Everything that happened in those first couple weeks.

Players couldn’t stop reliving their greatest moments and it wasn’t sniping rogue milita survivors with expertise as they defended their safe-heaven. It wasn’t discovering the massive survival camp turned Barter Town-esque city formed around Mid-Western religious zealots named New Bethlehem. Instead, it was the time a player had pulled the pin on a few grenades and turned his speeding car into a makeshift missile. It was when a player had gunned down some women and children after a particular nasty fight with other survivors, forever breeding mistrust of his character. It was when I used a broken shard from my replica Lord of the Rings sword to stab a zombie in his cerebral cortex. What the players really loved above all the attempts at interesting narrative turns and twists was the pure frantic chaos of being ineffectively armed and inadequately prepared to stay alive.

It was easy to see why, too. Without a some ultimate weapon in their hands to rely on, the players had to use all parts of their brains to find solutions. One player shoved a mattress out a third story window to escape a handful of zombies breaking down a door. Players needed to rush to the aid of the comrades just to defeat a single enemy. Without a simple solution, like holding a double-barreled shotgun in their hands, the players were forced to do things like examine the environment for solutions, find makeshift weapons, and sometimes just grow some balls and take a zombie on hand-to-hand.

What became quite clear as I tried to compensate their early weaknesses with better guns and talent trees that offered them exciting combat abilities, was that though players are programmed to seek out power, they actually have the most fun before they’ve obtained it. Beloved Anthony Burch nailed this point in his rant on gamer choice in video games. If you haven't watched it, go do. It says everything better than I could about how players need to see opportunities to make their own game experience engaging.

My players took every opportunity to enhance their abilities, of course. Who wouldn't? It's natural instinct to seize power when available. But gamers go a step further. They don't simply want to be acceptably good at being a part of the game. They want to be the best. When presented with a series of options for leveling, they will carefully weigh all the strengths and weaknesses until they've found the most beneficial option. So much so that players will seek out ways to exploit the system to become even stronger. Anyone who has listened to a World of Warcraft player declare the best talent tree to choose will know what I'm talking about.

Because, when it comes down to it, players look for the simplest path to a solution. This is because we're problem solvers. And we've been placed in a maze of infinite problems. Whether it’s kicking turtle shells into anthropomorphic mushrooms or determining where and when to toss a grenade, we are constantly searching for solutions. So when game designers present us with an easy out, a single weapon efficient enough to defeat a group of enemies, we grab it and never look back. But when a game leaves us ill-prepared for a fight, we search for alternative solutions. A well-placed explosive barrel. A stack of loose shipping crates. A hard-to-reach cloud in the sky that allows us to skip entire levels. These are the elements of game design that speak to our creativity and ingenuity. We relish in those moments, especially when they're successful, because they are the moments of greatest interactivity.

A game designer's job is to provides us with a steady increase in power. This goes almost without saying. Because, without it, we'd get bored pretty quick of using a crowbar for every boss fight. Whether a player enjoys those early, helpless levels or not, they all want to become more powerful. But combat strength should not be given without some work first. Because it’s those moments of challenge and creative perseverance about which gamers will forever reminisce.
#Community
Login to vote this up!