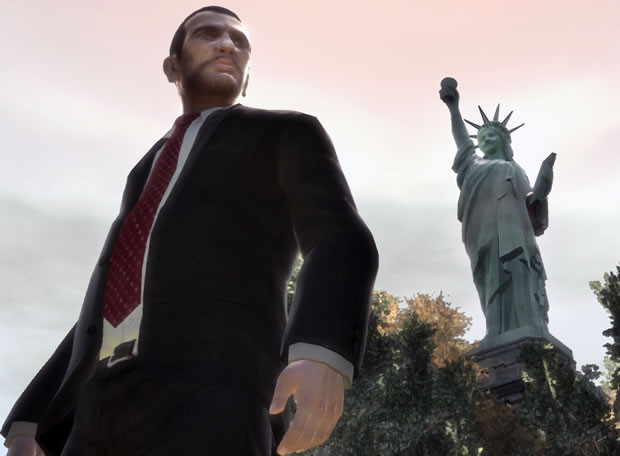 Niko became an average Joe, running a life that became not unlike playing a stripped down version of The Sims. I woke up in the morning and went to work taking cab fares around the city for my cousin. I outfitted the gruff, intense, brooding ex-mobster in the most unassuming outfit possible, complete with a pair of scholarly glasses. I went on dates with Michelle, which became progressively more hilarious since I was no longer worthy of her under-cover investigation. The most interesting thing to report on my Mr. Bellic was how deft of a bowler he�d become.

After numerous hours plodding around the city in my cousin�s taxi, occasionally going out for drinks with Roman, watching television, or nailing the high score in CUB3D, I unceremoniously ended my game. Without a storyline cut scene to cap it, I was forced to apply my own victory conditions. I�d made a fair sum of money from working a successful job and not bleeding cash in hospital bills and gun stores. Had the game left in some of the previous games� intricacy of buying property, I could�ve bought Niko a decent apartment, or maybe invested in crummy night club to turn a profit

But, sans any real assets, my version of Niko was otherwise victorious. He was a part of Liberty City. Bulgarin would never find him. He was able to manage a day job. The police never became acquainted with his ruthless prowess with a handgun and he scarcely put a dent in his cousin�s taxi. The citizens of Liberty City were sparred a vicious spree of crime and destruction. No one detonated buses in the center of Times Square and no helicopters were shot out of the air over busy downtown Alderney.

Grand Theft Auto IV had no achievement to award me for this victory, no gamerscore came from being an unassuming citizen. But in my story, Niko stuck to his moral compass and managed to flee his criminal past. His cousin kept his cab depot and no one shot his friends. It wasn�t in the design to progress this way and it constantly tried to buck me from my new goal. But, despite everything, it is nonetheless unreservedly possible for Niko Bellic to just be a nice guy.
#Community
Login to vote this up!