Combating Lawlessness in the Wild West of Red Dead Redemption 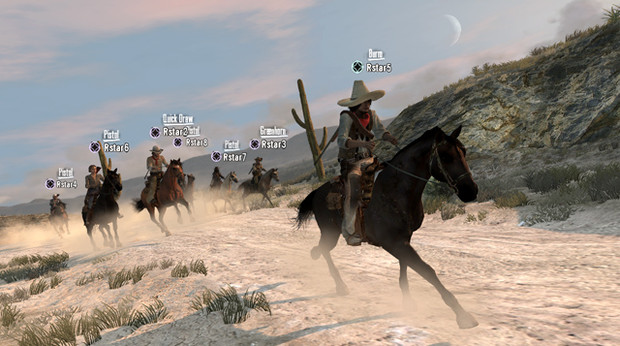 After a specifically rousing completion of the Tesoro Azul bandit hideout, my friends and I stood in the center of the walled town checking our ammunition and debating which town next needed our liberation. As we did, a friend cried out in alarm as he took a bullet from a stranger riding down the hill. Grouping back up, we all took cover behind a bevy of boxes and aimed our weapons at the main gates. The bumbling player came bursting through the gates awkwardly, stunned to see a whole line of soldiers waiting for him. So stunned that he didn�t even fire right away, but fussed with his horse trying to turn back around. But we didn�t fire either. Instead, all the player heard was my comrade shout �Hold your fire!�

Everyone stood still for a moment, having found ourselves in the middle of an accidental Mexican standoff. After a moment - each person half-expecting a trigger to have been pulled by now - I stood up, holstered my side-arm, and spoke clearly to the stranger.

Sure, it was a line stolen from the campaign and probably half a dozen western films, but the player seemed stunned by it. Again, if the characters could emote, this portly cattle rustler would look at least a little bit shocked. Considering past experiences, I expected him to simply call me a fag, try vainly to hit me with his rifle, and then follow us around for the next hour trying to avenge his pathetic death. But, instead, the out-matched stranger silently reared his horse in place, pulled the reins to the right, and kicked his steed into a full gallop straight back out the gates. He made no further attempts to bother us.

Again, there was nothing to gain out of not shooting the blundering outlaw, besides avoiding creating a temporary enemy who would nip at our heels for petty revenge for the remainder of the session. But, instead, we opted to avoid doing precisely what annoyed us: random killing. We had added our own layer of ethics, however shallow and marginal, to which we followed rather diligently. We didn�t like being killed at random, senselessly and idly, so we refused to take part. We�d chosen the good-natured path despite the opposite being at least marginally beneficial and certainly significantly easier. We had given Red Dead Redemption�s multiplayer a morality system.
#Community
Login to vote this up!