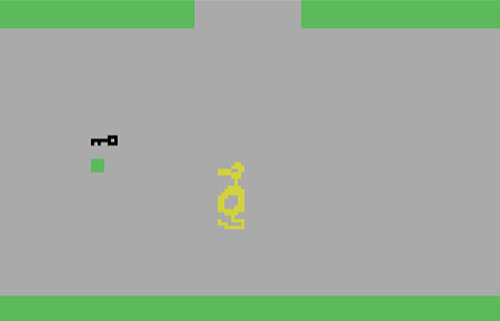 There is no denying the historical importance of Atari – games like Pong in arcades brought videogames a wider audience than ever before, while the Atari 2600 console was the first games machine to feature prominently in millions of homes. A more dubious first was Activision, which formed in 1979 when Atari employees, disgruntled with their lack of recognition, created what was in retrospect the first third party console dev. This success begot hubris which led to the company’s famous implosion in 1982-3, clearing the way for Nintendo to enter the American console market with the NES. The Atari name has since endured as an empty trademark, thrown around for no real reason every now and again. After playing Atari Vault, a selection of Atari golden age offerings for the arcade and 2600 alike, I have developed a little counter-historical thesis: even if Atari had not gone under, Nintendo would have won that console generation.

I will admit to my own limitations. By the time I was born Atari had died, and I used to love playing on a hand-me-down ColecoVision. I might be a little biased against Atari, in a very subliminal way, but I don’t think it changes the fact that, frankly, Atari games were not good. At least, not if this collection is representative.

For the most parts, the hundred odd games in this collection (no, I haven’t played every single one) are presented more or less untarnished. Developer Code Mystics has added things like online play here and there but the simplistic graphics flicker still like they would have in 1980 and the frame rates are, honestly, awful. This is particularly a problem for the 2600 titles – the console was underpowered even for its day, and is nothing short of a joke to a modern player – but the arcade titles are nowhere near as fluid or as graphically competent as near-contemporary offerings by Taito, Namco, Sega, Konami, Midway, Exidy, Williams, and the rest of them.

None of this would be a massive problem if the games were good. The truth is, they aren’t. Some of the arcade titles have held up nicely – Pong is surprisingly fast-paced and challenging, even well over four decades later. But the moment we move on to the 2600 offerings which comprise the majority of this offering, boredom inevitably ensues. A great deal of the 2600 titles are shovel-ware: crappy sports titles abound, as do slow, boring versions of timeless games such as chess and tic-tac-toe. No sport or hobby gains from being bastardised into a slow, graphically ugly form, and the temptation to quit them should not be resisted. There are also cheap little tricks, like including Breakout and a near-clone called Off the Wall. But what is perhaps most disappointing is the fact that the canonical 2600 games do not really hold up. Yars’ Revenge is a dull, slow shooter even by the standards of 1981. Most disappointingly of all, Adventure – a game of undeniable historical import – is just unbelievably tedious. Playing as a square against three rather inept dragons is not going to be eating into Bethesda or CD Projekt Red’s market, I can assure you.

In a sense, I am glad Code Mystics didn’t make these games any more playable than they really were. Retrospectively it seems obvious that such a lazy developer should have fallen victim to its own success (a success which today seems inexplicable). If you want to play good games from the early 1980s, find a port of a Eugene Jarvis game, or buy a ColecoVision. Atari Vault should remain forever closed.