2:15 PM on 10.27.2013 (server time)    0
Critical Analysis is a series of critiques focusing on analyzing games and what they are trying to achieve. It is not intended as a review and as such is better read by those already familiar with the game. Spoilers will not be omitted.

The Stanley Parable is a game like no other. It tries to pick apart gaming conventions as we know them. It also tries to challenge our own perception of a video game.

Do not let the Narrator fool you, the game has no storyline, it has a pretext of a story as a means to carry its thesis. The disjointed voice in the game known in-game only as the Narrator, voiced brilliantly by British voice actor Kevan Brighting is used as a metaphor for both the game and its creator.

The game takes place in the dull halls of an office building. Though it makes intelligent use of its limited assets and color palette, the majority of the environments are uninspiring with a few notable exceptions. Possibly a result of the game’s origin as a Mod and also as a means to convey its message in a sterile environment. This results in any playthrough length to be fairly limited, with the average time of ten-twenty minutes to get from the beginning to any given ending.

Though initially appearing intelligent, the concept of the game tends to fall to pseudo intellectualism and the usual trap of imitating the object of its commentary. For example, in one of the game’s many possible endings, you are required to arbitrarily press buttons for a total of four hours. In its effort to show you both the obscurity of an ‘art’ game and the repetitive monotonous actions we are frequently told to do in video games, like grinding levels in an RPG, the game does exactly the same. This is also present with the game’s Steam Achievements, one of which requires you to play the game for the whole duration of a Tuesday, another expecting you to play the game five years after you last played it, and another seemingly ‘unachievable’ achievement having its requirements randomly tweaked by the developer after every update. 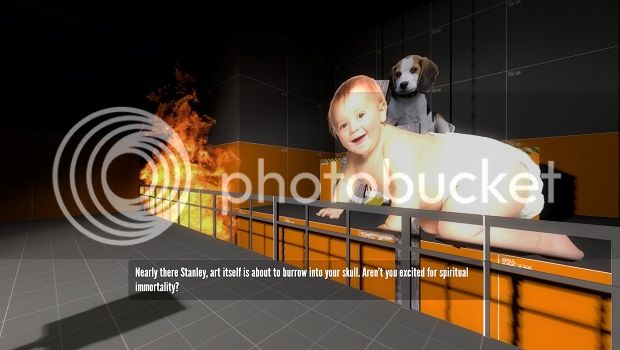 The illusion of ‘breaking’ the game may hold for the first hour through and the first couple of endings you run into, but wears thin if you persist, as it becomes apparent that without the Narrator disapproving your actions you are simply following the usual narrative, developer predetermined paths of other choice driven games. The game offers no answers, no solutions to the gaming tropes it comments upon, it simply emphasizes their existence. Tropes which should be familiar to avid gamers either consciously or subconsciously and should have been expanded upon or given a better perspective. The writing, almost always delivered from the voice of the Narrator, is generally well written and smart, but occasionally stumbles on its own arrogance in assuming the players intend. The game often appears arrogant and full of itself in other aspects of its design, and too much in love with the novelty of its own concept.

The Stanley Parable succeeds in delivering its message, but it sacrifices it’s own integrity as a game in doing so. But the game has the possibility to give you as much as you are willing or able to take from it. It can last as little as the couple of hours it would take you to get through most of the apparent endings, or many hours as you rummage through the game for every possible Easter egg and secret. It can be very illuminating and thought provoking as it can also be very boring and telling you of things you already know.

The game’s greatest failure however, is in its existence as a product. When the original Mod, and even the game’s own demo, do a better job of conveying the message of the game in a more concise and even entertaining form.

The Stanley Parable is a game worth playing if only due to its novelty alone, but it is not a product worth buying.
#General-Opinion/Editorial
Login to vote this up!

I am no longer active on this site.