So I started a blogpost about how Blizzard let down their strategy fans by focusing only on the MMO aspect of the Warcraft Universe, and not making another hit like Warcraft III. but the blogpost fell through because I really didn't play Warcraft 1 and 2 as much as I did the third installment. I had cousin who did, but in the 1990's Norway, getting the scoop on the inside of the gaming industry was pretty hard, All we ever heard was rumors set out by a guy who wanted to be cool, so everything I had in form of of background story (which I deem important to a blog post) was either by hearsay, or shotty research from Wikipedia.

I owe you better than that.

Now I might go back to that train of thought another time. Because to tell the truth, I'd rather see another RTS set in the Warcraft Universe than another expansion to World of Warcraft.

But back to the new blog post. With the big news today being the newest trailer to GTA V. I decided that it would be about my love for the series that basically paved the way for a whole new concept, Sandbox

My love for the Grand Theft Auto Series 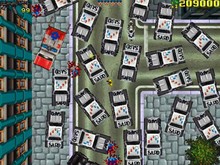 Now where did I park my car??

The game brings back fond memories to this day, and recently the feel of the game has come back with the release of Retro City Rampage, If you are a fan of GTA and GTA II you should most definetly check that out, It's AWESOME.

Now what made me come back to the first two games in the series was the complete mess of destruction you could get away with within the games. But this wasn't what kept me in the series, GTA III introduced a story that was engaging, well written and had hollywood voice actors like Michael Madsen in it,

The maim and destruction was still there but it wasn't the main reason I kept playing, I really wanted to see Claude get his revenge on Catalina for shooting him in the face in the intro of the game.

Claude was pretty much a blank slate that didn't have any past or present, except for the aforementioned shot in the face during a robbery. but the side characters, was what made the game golden for me, Names like 8-ball, Salvatore Leone, Kenji Kessen, Donald Love, all of these made the story pretty interesting, and it didn't hurt that the missions were packed to the rim wity fun fun fun either.

Now I won't make a summary of how much fun each and every game was to me. because that would be a too long blog post and no one would ever read it, so instead, my next blog post, which I'll work on and release over the weekend, will be about my favorite game in the GTA series

Hopefully I'll see you there
#ShareonCommunityBlogs
Login to vote this up!

Well this is akward, I guess you want me to tell everyone something about myself, Where to begin, I'm from Norway, where I work as an Electrician, And I have a well established gaming addiction that started early on, As I've grown up it's probably the one hobby that has been constant, I started with a Windows 3,1 computer with games like Wolfenstein 3D and Prince of Persia, moved over to Sega Mega Drive (a console I still have and play to this day) and so on and so forth.

Today I own all three of the home consoles on the market, and a high end computer, I try to play just as much on all four, but as the current generation has stalled too long, I often than not find myself playing most games on the PC with a Xbox Controller.

In my blog I'll write abit about everything that I find interesting in the industry today, So I hope you enjoy.