Threat Level Jerkface: How to Survive a Douchepocalypse 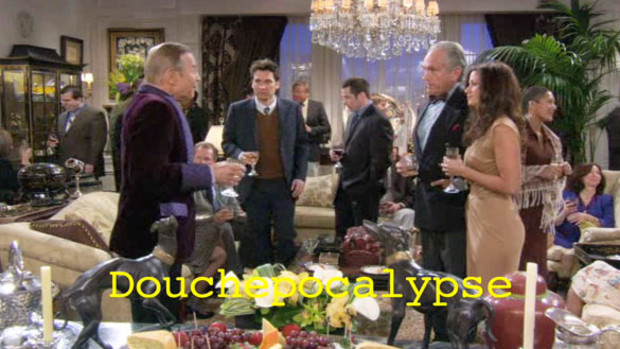 Today was what we might refer to as a "hot mess."

Normally, we'll see a spam blog or two per day, and maybe a harmless failblog or two. Today, it was a perfect storm of fail. The fails piled up like a stack of dino droppings, and not even the world's largest shovel could clean it all up. While the fail might be gone now, the scars will remain.

I hope that this never happens again, but the sad fact is that this has happened before, and it will happen again. It's not something that anyone can prevent, at least not without us turning into a site that frankly no one wants us to turn into. Destructoid gives users freedom, but when you violate that freedom so heinously, we'll come for you.

So, when the next hot mess happens, or what we can also refer to as a next douchepocalypse, what should we do? How can we survive? Well, follow along as I create a survival guide for the douchepocalypse from the top of my head in record time.

Yeah, the douchepocalypse is frightening. The spam, the idiots, and the trolls might number so great that it seems deliverance would be impossible. Perhaps your good blog has been bumped down to the bottom or, heaven forbid, the next page. Shitty, I know. But the worst thing you can do is freak out. Keep your cool and know that we're coming to clean up the mess.

Spammers should be deleted. Jerkfaces should be banned. No doubt about that. But calling for them to be banned on the site is going to make things worse, especially in the case of trolls. It just gives them more reason to post more, screw up your own blogs, and come after you personally. We'd much rather have them bitch and moan at us and call us dicks. Community members don't deserve that shit.

Instead, just get in contact with someone. Follow me on Twitter and let me know if a situation is developing. Email me and let me know that someone's being a dick. Let Hamza know if I'm not responding, since my day job keeps me away from a compy most of the day. And, yeah, tell us to ban them. We'll do it, and hard.

I'm not sure how often this really happens, but one thing I'm not going to stand for is people privately attacking (or publicly, for that matter) users of this site. If anything happens like that and it isn't visible to everyone, or if it is but I obviously haven't seen it, tell me. I'm not going to allow people attacking members of this site. Ever.

4. Don't let it scare you away from the blogs

It's easy to see a blog roll full of spam and think "Holy shit, if I post something now, it'll be buried forever. Guess I won't post at all." Please, please don't do this. If we don't have the great blogs that go up daily, even in the midst of a bunch of fail, then we've got nothing left. The terrorists have won. So by all means delay your blog until we've had a chance to clean up, but (and this goes back to not panicking) don't let incidents like today steer you away from posting blogs. If you post something great, it's going to get recognized. If you feel like a blog didn't get a fair chance because of a douchepocalypse, let me know.

5. Be excellent to each other. And party on, dudes.

In other words, just keep doing what you do. Laugh at a day like this, flip the bird in its general direction, and continue being awesome. Look at a day like this as another great reason to write your own stuff on Dtoid and keep the blogs awesome. Keep commenting on the great blogs and fapping like your life depends on it (it does; my grandmother told me so). Ignore the shit publicly, tell us about it, and we'll nuke it as soon as humanly possible.

As a last note, I'm sorry days like this happen. I really am. It's not fair to anyone on the site, especially the people who have written something that day that's actually worth reading. If you ever have any concerns at all, don't hesitate to email me, pm me, tweet me, whatever.
#AboutDestructoid    #Community
Login to vote this up!