Alternate Reality: The Hilarity of Evil 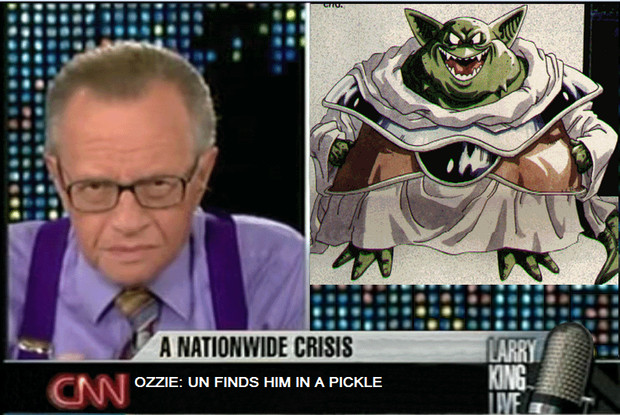 Larry King has always been anti-monster.

Our culture tends to demonize the villains of the world. I mean, no one's talking about how Kim Jong-Il is a terrific polo player or that Idi Amin knew a collection of hilarious dirty limericks. As far back as human civilization goes, when we have enemies, they are fucking evil bastards that eat the children. Wouldn't it be easier to win out over a villain that we find ridiculous rather than terrifying?

When the villains of our world get truly weird, can we cope with them the same way we deal with Hitler? If Obama went on TV one evening, a grave expression across his face, and told the American people that the forces of New Pork City had amassed an array of WMD, what would your reaction be? Would you be outraged at the Pork King Porky's audacity, terrified of the potential for nuclear armageddon, or laugh at the funny pig men marching across the screen? Imagine reading in the history books about the so-called "Day of the Tentacle," when large, purple creatures attempted to rise up against humanity. The term papers alone would be hilarious.

This brings me to another point. What of villains like Bowser or Kefka? These two are unique in that they can exemplify both humor AND menace. Before you discount Bowser as menacing, I offer this as evidence:


Maybe it's just the music, but JESUS. Of course, ten years+ later, we have Bowser's Inside Story, and really ANY Mario RPG outing, and the menace is largely replaced by humor. Villains like Bowser would be viewed more as a curiosity than something to be feared. Terror may be what he's good at, but if Bowser can't even kidnap one royal dignitary, he doesn't have much chance of ruffling any feathers.

We tend to define ourselves as a people, at times, against the evil that we face. For example, during World War 2, we had a clear delineation between Good and Evil. Hitler and Hirohito were evil, so let's go get 'em. Today, there's nothing really resembling true evil, with the exception maybe of Kim Jong-Il, but I've always found him to be a step or two removed from Kefka anyway.
#Community    #OpinionEditorial
Login to vote this up!