12:12 AM on 12.22.2011 (server time)    0
The Destructoid writers' Character of the Year article (specifically, the Adam Jensen entry) got me thinking about my own favorite collection of pixels and polygons in 2011. I then thought, "oh wait, I could turn this into words!", and thus the piece below was born. I was originally just going to do a bit on DX:HR being my game of the year, but since I have yet to play Skyward Sword (which can potentially capture that throne) and it'd be a horribly generic thing, this seemed to be a much better option. Also, spoilers for the entirety of Human Revolution contained within.

Deus Ex's world is one replete with conspiracies, shady figures holding ulterior motives, plans within plans within plans within plans (within plans), and, to quote one of Human Revolution's trailers, corporations who hold "more power than the government." Who better to exemplify this, thought I as I first begin playing, than David Sarif, founder and CEO of Sarif Industries, one of the world's leaders in human augmentation?

Clearly, I continued to smugly muse to myself, he was a simply a fusion of Joseph Manderly and Bob Page from the first Deus Ex; a power-hungry executive putting on a facade of fatherly warmth, ready and waiting to shank me in my mechanical back as soon as the plot assumes I least expect it. What? That new research could completely change the face of augmentation? Sure, Mr. Sarif, if by "augmentation" you mean "our profit margin." Oh, you're ordering me to prioritize secret company technology over the lives of hostages? How much of an obvious mid-game twist-villain could you be?

My certainty wavered a bit after the first real mission; faced with the prospect of being politely and amicably dismantled and disgraced by anti-augmentation advocates, he complains to a friend and mentor about having to bend over and take it to save face. But that couldn't be right... surely an evil CEO knows how to do these kinds of things better than anyone? He must know I'm eavesdropping and is putting on an act to divert my suspicions. Still, ordering me to break into a police station (and casually mentioning that he controls the cops' retirement funds) assuaged any doubts that I would soon be horribly betrayed. 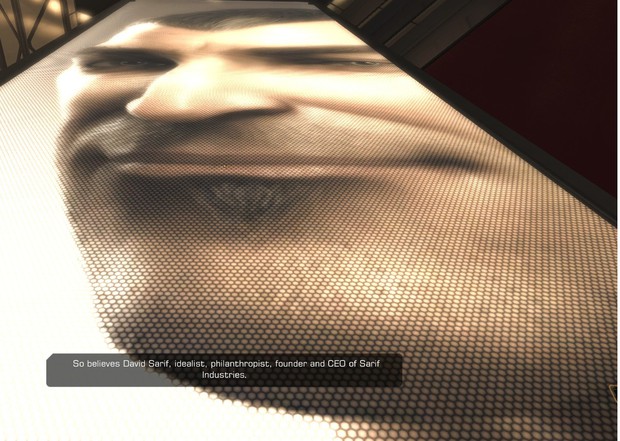