4:49 PM on 09.20.2010 (server time)    0
If you're reading this we can assume you've already listened to the second ep of everyone's favorite batshit crazy podcast on Dtoid. We can also assume that even though the ep was still hilarious, you've likely had some issues, namely how ridiculously chaotic everything ended up. We're aware of this, even before recording the second ep, which is why we've been discussing a change to our special guest format. So here's the deal with us now: we're not going to have one special guest. We're not going to have two special guests. We're going to have as many special guests as we damned well please. Ever listen to the podcast and wanted to pipe in with something insightful and/or stupidly funny? Now we're giving you that chance.

This is how it'll work: before we record an episode, we'll ask the wonderful community (i.e. YOU GUYS) who wants to be on the 'Holocast. Once we have an idea how many people want to be on, we'll get you guys in our super-exclusive VIP "waiting room", essentially our Skype recording room. In this room, we'll invite you to the call so you can listen in on our episode with (HERE'S THE IMPORTANT PART) your mic muted. If you have anything to say, make sure you speak up in the text chat, and we'll try to get you in. Depending on the turnout, everyone will have anywhere from 2-15 minutes to guest on the show, although those numbers aren't solid. 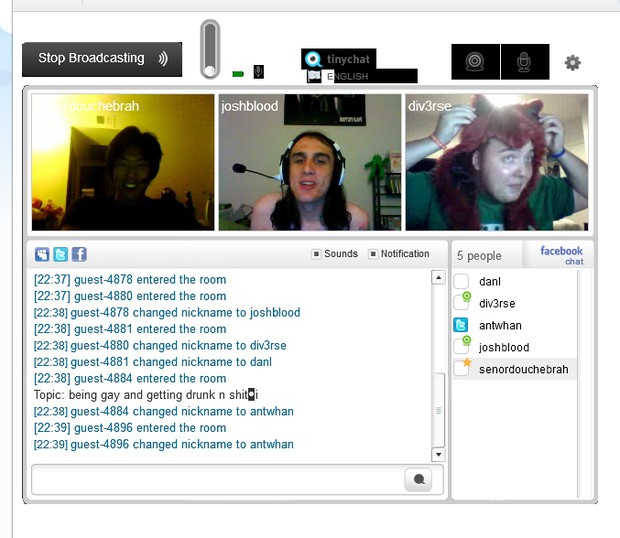 Kinda like this, except w/ less furry. And in Skype.

Also, being drunk is an option. Wouldn't want you guys to get hammered alone and then not have a chance to show us how unfunny you are when you're full of cheap vodka because we have too many other guests in line.

One final rule: courtesy please. If you don't mute your mic and pop in and out without any of us okaying it, you will be dropped from the call and banned from being a guest, along with receiving a vicious shit-talking from us on air. Also, I realize some of us may be getting rightfully hammered, and general disorder will result; that cannot be controlled. What can be controlled, however, is general common courtesy of folks. Don't speak over people, don't interrupt people, and don't try to be the star of the show. Basically, don't be that loud fat drunk chick that was only invited to the party out of pity.

We had talked about our ginormous cast previously, and would have gone through with this new format last episode, but with a respect to the guests we already booked, we decided to implement this after that episode.

We're still not sure this'll work perfectly, or work at all, but we're ambitious mother fuckers, so we're recording a mini-ep tonight as a test run. The full cast won't be there, but most of us will still be pretty buzzed, so it'll still be amazing times.

So here we go: if you want to be on the 'Holocast as a guest or have a live listener question, and are available tonight from around 10:30PM-1AM EST, leave a comment on this post with your Skype name, and one of us will add you to the waiting room and whatnot.

Everyone else, the usual listener questions please. Julius wanted me to remind you folks that it doesn't have to be about liquor/booze; you can ask about Julius' first buttsecks, Danl's shoe size, how much of a pedo Allen is, etc etc, WHATEVER.

Thanks boners for listening to us and supporting us, even through all this crap!
#Community
Login to vote this up!