Everyone has their favorite video game character. Tons of people like Cloud, Mario, Sonic, and Link. However, this edition of Point Counterpoint isn’t about them. Today, we’re focus on the characters who weren’t central or critical to the story, characters that you weren’t required to use (or even get), and characters that really didn’t do much at all yet were inexplicably badass. Today, Caf and I are fighting over who the best unimportant party member is. And for me, there’s only one clear answer: Mog. 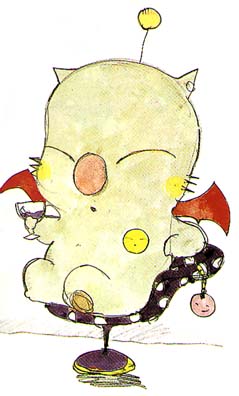 "Human-loving, fast-talking, street-smart, SLAM-dancing... Moogle..."
When I first played through FFVI after getting the game through Christmas, I was immediately drawn to the Moogles during the game’s opening scene where they band together with Locke to save Terra. I was about 20 minutes into the game, I had never seen a Moogle before (except on the cover of the box), and had no idea what they did, but I knew they would be pretty awesome. Today, I’m going to try to put into words just what it is about Mog that makes him so awesome.

A Fuzzy Little Ball of Death

When I saw the Moogles in the Narshe Mines, my first thought was “Aw, how cute. Little cat people are going to come help me get out.” Imagine my surprise when instead of dragging me off into the back of the mine, they all made cute little groups and started fighting. Already impressed by the fancy idea of 3 separate parties to control at the same time, the fact that they were impaling people with spears was just so cool to me. Right there, at the beginning of the game, I knew that I wanted one of them to be in my party and that I would be really upset if they weren’t.

For me, one of the appeals of Mog is that what he’s capable of. Based on his appearance (cute, but not sickeningly so), you wouldn’t expect him to be much of a fighter. The fact that he actually kicks quite a bit of ass (which I’ll go into later), and that it’s so antithetical to his appearance makes him very appealing to me. Sure, everyone knows that Sabin is awesome and could rip your throat out with his bare hands, but he LOOKS like he’d be able to so it’s not a surprise. Like Uma Thurman in Kill Bill, Gordon Freeman in Half Life, or even Ness from Earthbound, one of the reasons Mog is appealing is because he doesn’t seem to have the appearance or personality of a fighter, yet he is one.

However, you might be thinking that in terms of the fighting department, Mog’s a pretty bad character (as many of you seem to think about Gau). Hopefully this next section will explain why he’s actually quite useful and an excellent addition to any party.

At first glance, Mog’s dances might seem stupid and lame and you would wonder why anyone would use them. As someone who played through the game with Mog, I’m going to explain why he’s a valuable addition to the party.

To begin with, Mog has pretty decent stats. He starts off with pretty high HP, attack power, and magic power across the board, and can really be molded into any kind of character you want. I mainly had him as a magic user, but he makes an equally effective fighter.

This is the real-world equivalent of Mog.

While admittedly not as useful late in the game, many people don’t realize that Mog’s dances are one of the best special abilities you can use during the World of Balance. When first starting out, the Wind Song dance can make battles MUCH easier for you than they normally would be. The combination of Sun Bath and Wind Slash (the individual dances within Wind Song that seem to come up most often) mean that you basically have unlimited free healing and attack-all magic every other turn or so, for no MP. Sure, you can’t control Mog while he’s dancing, but the fact that your party is regularly being healed back to almost full health while all the enemies are getting punished is invaluable. Later on, Snowman Jazz and Water Rondo become useful as well, with incredibly powerful all-enemy attacks that cost no mana.

One of the most hated things about RPGs (even to those who love them) is the constant, never-ending random battles. Many people actually dislike the genre solely because of random battles, and even people who love the genre to death (like myself) eventually get sick of them. The Moogle Charm is the absolute best relic in the entire game, because it removes all random battles. Completely. Give Mog the Moogle Charm, and you never have to fight another non-boss battle again. This alone should already rocket Mog to the top of everyone’s favorite lists.

In addition to being a cute cuddly badass, Mog also has a pretty kickass theme song that I feel encompasses his personality. Lighthearted and playful, but with a bit of a kick to it. Take a listen here:

Important Enough to be on the Front of the Box

Mog was such a badass, that he was picked over everyone else to be on the front cover of the American box art. Not Terra, not Locke, not Celes, but Mog. The “main” characters of the game, the ones who had all the dialogue and story, took a backseat to Mog. Why? Because looking at Mog wants to make you buy the game. He’s that awesome. He’s so tiny and so furry, but his sassy smirk says “Hey menacing shadow, I’m going to stab you in the face so fuck you.”

And he will, because he’s a bad ass.

For a character who almost never speaks in the game (not even the classic “…”), Mog is an amazing and loveable character. As the Final Fantasy franchise expanded and Mog and the moogles entered more games, they became more and more popular. Cait Sith, Mognet, the Moogles running around the Chocobo Story games, Montblanc…remember that they all began with the original badass, Mog.
#Community
Login to vote this up!

Come join us on IRC!

I'm 23, and have been playing games since I was about 2 or 3 with the super old computer my dad got to bring home from working with the government. I got my NES when I was 5.

I love old school SNES RPGs, and I play pretty much anything now except sports games. I'll play FPSs, but typically not on consoles.